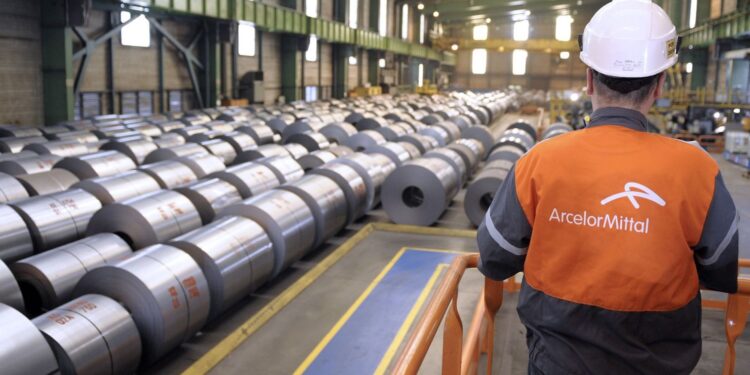 Arcelor Mittal South Africa had very nearly collapsed from the collapse of global demand for the commodity that is used in various applications ranging from construction and manufacturing.

by Laurence Sithole
in Africa, Investing
0
Share on FacebookShare on LinkedIn

Arcelor Mittal Steel South Africa is a company that many may not be familiar with yet it has massively contributed to South Africa’s economy for decades.

Before we get to the details, a little info on ownership of the multibillion-dollar company.

For many years during the early 2000s Lakshmi Mittal the steel magnate was reckoned to be the richest South African citizen.
The basis of this assertion was the billionaire’s controlling interest in the country’s largest steel company, Arcelor Mittal Steel South Africa.
His interest during that time ran into the billions of US dollars. That mantle has since fallen to Ivan Glasenberg, the former chief executive of Glencore. His personal fortune is estimated by Forbes and Blomberg to be in the region of US$ 7.5 billion.
Read: Russia’s dance with Africa

Mittal has not lost his shirt from the financial distress that the South African unit of his global steel enterprise has suffered.

He is still, and quite substantively, a billionaire with an estimated fortune of US$20.3 billion. The global company he was the chief executive of until January 2021 has revenues of at least US$53 billion.

The company reported a net loss of $700 million in 2020, a year in which steel shipments declined by close to 20%. In 2019 the company finalized its acquisition of Essar Steel.

The company’s website describes Mittal as “a renowned global businessman who serves on the boards of various advisory councils, and an active philanthropist engaged in the fields of education and child health.”

The website goes on further to relate the early days of Mittal’s life, his background, his upbringing and his first foray into business when he left his family’s steelmaking business where he began his career.

He then moved to Indonesia in 1976 to set up a small steel company that over time grew to become ArcelorMittal, the world’s leading steel and mining company and one of the foremost industrial companies in the world.

He is widely recognized for the role he played in restructuring the steel industry towards a more consolidated and globalized model, pursuing, and successfully integrating many acquisitions in North America, South America, Europe, South Africa and the CIS.

Today ArcelorMittal continues to be the largest and most preferred global steel manufacturer.

In 2004, Mittal Steel was founded following the merger of Ispat International and LNM Holdings, and the simultaneous acquisition of International Steel Group, becoming came the world’s leading steel producer.

Shortly after, in 2006, Mittal Steel launched an ambitious bid to merge with Arcelor, creating ArcelorMittal. Lakshmi Mittal has done very well, and it leaves little doubt in the mind that he has enjoyed a very gratifying career replete with success in business if his personal bank account is anything to go by together with numerous recognitions of his work in philanthropy and his contribution to the steel industry.

Reports in the media and various circles within the financial and investment community is that the company has made a turnaround of Biblical proportions. Excuse the superlative.

Arcelor Mittal South Africa had very nearly collapsed from serious viability problems emanating from the collapse of global demand for the commodity that is used in various applications ranging from construction and manufacturing.

Times had not been easy for steelmakers in general and Arcelor Mittal South Africa in particular.

During that same trading statement, the company also announced that it would idle its blast furnaces at Vanderbijlpark and the Vereeniging electric arc furnace until demand recovered. These were some of the measures the company undertook in response to the plunge in demand for steel.

The other measure was downsizing the number of people under its employ. Its moves stoked the ire of trade unions who criticized the company for using COVID as an excuse to retrench workers.

The government through its minister of trade and industry also ventured into the fray to stem the crisis at the company by instructing the International Trade Administration Commission of South Africa (ITAC) to institute an urgent process that would determine measures to support the metals industry.

The minister also ordered an immediate halt to the export of ferrous and non-ferrous waste and scrap. The world was collapsing around Arcelor Mittal South Africa… again excuse the superlative.

Arcelor Mittal’s venture into the South African steel space started in 2006 when the company acquired and merged with the Iron and Steel Corporation or ISCOR as it was known then. Arcelor Mittal bought its South African operation at the height of the commodities supercycle which was driven by China’s near-unlimited appetite for commodities including steel when its economy was booming.

The acquisition of ISCOR by Arcelor Mittal resulted in the creation of the largest steel producer in the world and the most dominant player on the African continent.

When China’s growth began to slow down the company found itself in a disadvantaged position with the massive stockpiles of steel. The domestic market has conferred no advantages to Arcelor Mittal which had to contend with a stagnant and declining construction sector.

Adding fuel to the fire was the fact that infrastructure programs muted by the government had failed to gain traction and given impetus to the construction and steel sector. 2019 was a year most steel producers would prefer to forget.

Fundamentals in the steel industry were so adverse that certain circles in government and business began to question the idea of privatizing the steel industry in the first instance. There was a 2% drop in the consumption of steel in South Africa, a 13% drop in international steel prices a 9% decrease in the volume of steel sales. In that year it posted a loss of ZAR 222 million.

Operations at Arcelor Mittal SA have restarted and are sufficient to meet domestic demand for steel.

According to CEO Kobus Verster, the company is running at what he called full operation. The head of the SA unit made these remarks during a trading update in May of 2021.

At that time the tide had started to turn in the steel industry’s favour with demand outstripping supply. Backlogs of orders were commonplace then. The company is now making record profits and presents a strong investment case for investors with a stomach for risk and a love of turnarounds.

The near-death experience that it experienced from subdued international demand for steel and the onslaught of cheap imports seems to have invigorated the steelmaker. Of course, great thanks go to the resurgence of prices for commodities. This has afforded Arcelor Mittal South Africa a crucial lifeline.

Fundamentally the company has indeed turned the corner and posted some very impressive numbers. Its share price has rebounded by an impressive 626% in 2021. The share price is expected to strengthen further with the company presenting its final year results in February. The market expects the company to maintain its strong financial momentum. In September the company announced earnings of ZAR 3.6 billion (US$ 232 million) which was its best performance in 10 years. Free cash flow increased from a deficit the previous year of ZAR 306 million to ZAR 985 million.

This is consistent with other commodity producers who have deleveraged their balance sheet by reducing their borrowings. ArcelorMittal has reduced these to a manageable ZAR 2.7 billion. This is all thanks largely to the increase in steel prices. The average international dollar steel prices increased by 79% in the 2021, while the company realized a 42% increase in rand steel prices. To its credit the company managed to keep its costs very low.

ArcelorMittal is trading at ZAR 9.50 as of the 18th of January compared to the ZAR 1.41 it traded at in January 2021. A very impressive increase in the space of a year, however, is still a far cry from the all-time high the company once traded at the zenith of the commodity supercycle of ZAR 250.

Should the company manage to sustain the positive financial momentum there is no reason not to expect the share price to return to its historic high levels.