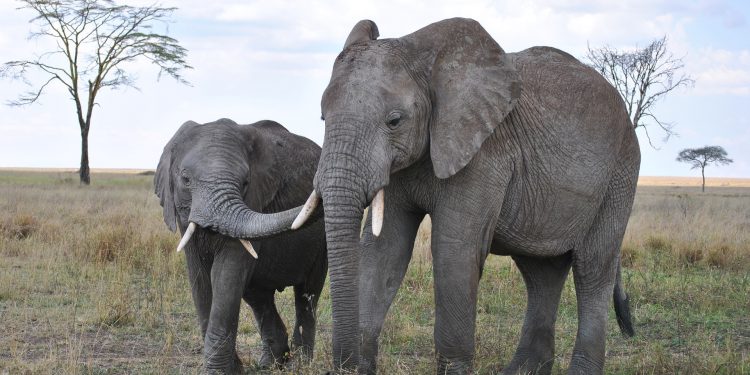 Elephants are one of the largest existing animals and pristine mammals to Tanzania’s tourism, Source: Pixabay.com

Billions to be won by Tanzania: Tourism and Magufuli’s unchartered terrority

Tanzania’s Ministry of Natural Resources and Tourism released recently new statistics, showing Tanzania assuming a rise in visitors from 1.3 million in 2017 to 1.5 million in 2019, sparking a 2 million increase in course of two years.

by Padili Mikomangwa
in Africa, East Africa, Tanzania
0
Share on FacebookShare on LinkedIn

National parks, great lakes, tall mountains, and exotic landscapes are part of the great-deal that Tanzania’s tourism package tends to offer to its visitors.

Tanzania’s Ministry of Natural Resources and Tourism released recently new statistics, showing Tanzania assuming a rise in visitors from 1.3 million in 2017 to 1.5 million in 2019, sparking a 2 million increase in course of two years.

While Tanzanian counterparts- Kenya crossed 2 million visitors into her borders, taking the top spot across East Africa, apt to take a view on Kenya’s attractive list, anyone with “2 cents” on tourism would desire to experience, the vast wild beast migration of Serengeti, Tarangire, including the exotic heritage sites of Tanzania’s breath-taking Kilimanjaro and of course the beautiful beaches of Zanzibar.

With a half a million difference in visitors, there are important questions that hover across Tanzania’s tourism sector that is strictly driven by a country’s political stability, harmony, longstanding and constructive diplomatic relations and a competitive tourism apparatus that incorporates inbound and outbound visitors’ attraction.

Dissecting the latter on a fair basis, Tanzania has recently plunged into a bit of an “economic dark side”. This is a result of major macro-economic turn around policies initiated by the current administration under President Magufuli. Certain actions have discouraged private sector players involvement, especially when Tanzania Revenue Authority (TRA) and Tanzania Investment Centre (TIC) clash amidst protecting state’s interest, which overtly have resulted into business shutdowns spurred by tax disputes, discouraging hundreds of tourism businesses that have invested across the country. 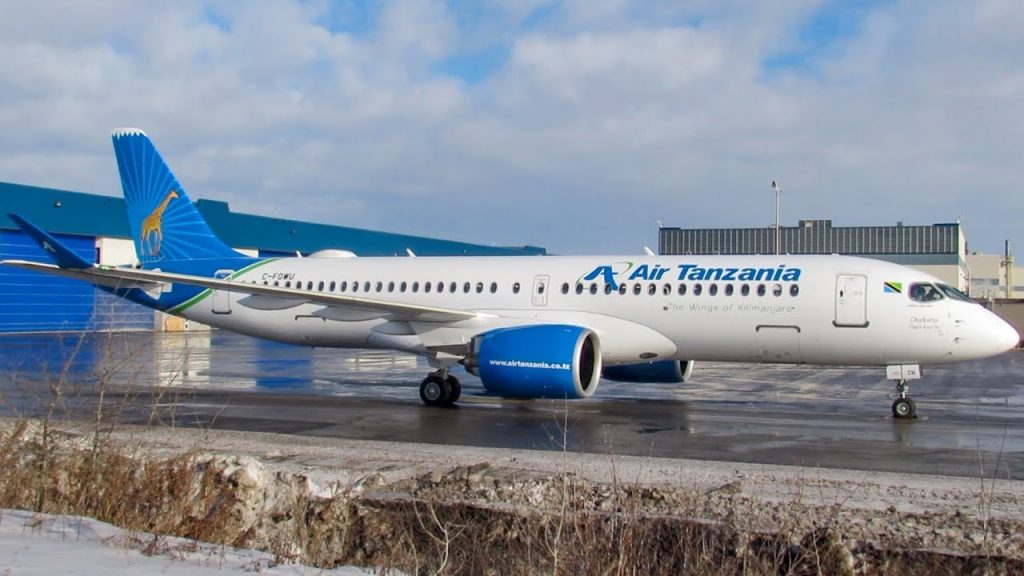 According to the African Journal of Tourism and Hospitality, Tourism and Leisure, there are vital components that triggered tourism in a particular sphere. One of the components is “motivation”; whereby one of the key factors drawing tourists into a country is, their desire for daily stress and finding something adventurous.

Human Rights Watch 2018 report, casts light on various violations and undiplomatic actions taken by local authorities. The decline of freedom of speech, association and assembly, rhetorical attacks on civilians by authorities, repressive laws and a hard-fist on journalism, tend to rob us of millions of dollars from tourists who prefer a replication of democratic and civilized interaction observed in their countries to co-exist in Tanzania.

USA, UK, Germany, Italy, Netherlands, and France, are among the top visiting state and forex payers, but also are democratic and civilized Western Nations who are also development partners to Tanzania. The current administrative policies have to a certain level marred the country’s diplomatic relations, and this has been propogated by various reports in international media.

Considering the fact that, Tanzania is one of the friendliest nations across Africa, its travel and tourism industry brought home, 17.5 percent of Tanzania’s Gross Domestic Product (GDP) and employed 11 percent of the country’s labor force.  Such figures are crucial considering the international relations parameters that might paint a grim or adept picture of the country’s governance, political economy and diplomacy.

In February 2018, the EU, Canada, Switzerland, and Norway, which are all development partners for Tanzania, decried attacks against MP’s, government officials and journalists, a factor that discourages outbound marketing for the tourism sector.

However, the recalling of the EU ambassador for Tanzania due to human right violations as was mentioned by the outgoing individual, sparked an interesting observation, primarily on the effect of the country’s political economy with the populations from countries that spend money on tourism.

Read: How Stanbic Bank and ICBC are attracting Chinese tourists to Tanzania

Despite this, localalized problems namely with how local tour-guides have misused their roles, abused their powers and have sought to swindle various tourists are causing a reputational loss for the country.

A simple example is seen on Trip Advisor reviews of tourist visitors to Tanzania’s game parks.

Tourists who share their experience from Tanzania, have noted for quite some time, to experience unprofessional interaction from some tour companies. Such occurrence mar the hard-work executed by the ministry and privateers to stimulate revenue. 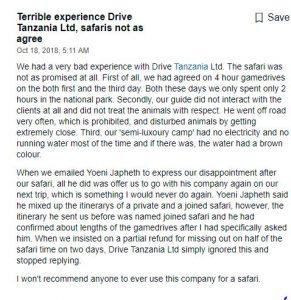 Above is a trip advisory review message published by numerous visitors, who pay thousands of dollars for half dozen to dozens of nights spent in camps and hotels.

Still, there are billions of shillings open for the taking across various rich-landscapes of Tanzania, apart from the conventional attraction lineup.

Ecotourism is a perfect breeding group for excess tourism revenue, whereby with the rich ecosystem and rich biodiversity across regions of Tanzania, the government can the incentive private sector and the third sector to act upon the latter, who will be championing economic inclusion for the locals and attract more tourists who are inclined on eco-tourism phenomenon.

While efforts to brand Tanzania as the “go-to” place for tourism stand to be seen, much more needs to be done via the digital medium to enable the country to be seen as a prized destination, when comparing with other African nations.

If the leadership were to address this, it is with no doubt, tourism revenues could generate the expected billions it should, making Tanzania a top destination in the world.

What A Growing Population Density Means for East African Investment

How Tanzania Stands to Make Billions Through Water