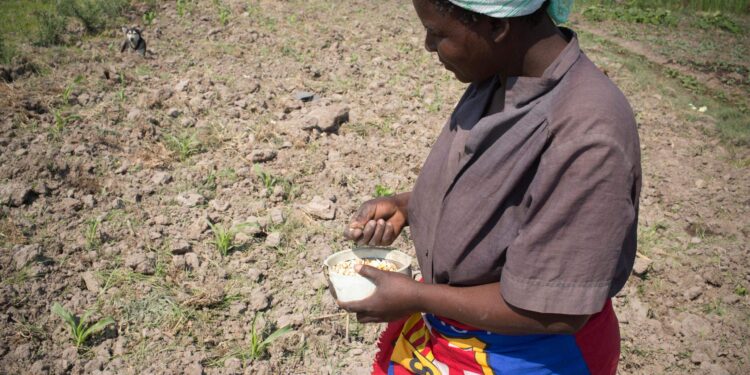 Economic growth from agriculture in sub-Saharan Africa is 11 times more effective at reducing extreme poverty than any other sector.

by Njenga Hakeenah
in Africa, Agribusiness
0
Share on FacebookShare on LinkedIn

Unlike the often pushed narrative that large scale farming in Africa is what will address hunger on the continent, the reality tells a different story.

IFAD states that agriculture could be the world’s most vital investment. And this is rightly so because no one can survive without food.

The potential for Africa to feed the world cannot be underestimated. IFAD’s The Field Report indicates that a quarter of the world’s arable land is found in sub-Saharan Africa yet the region produces only 10 per cent of the world’s agricultural output.

Sadly for Africa, rural poverty keeps driving people away from the countryside to the cities in search of a better life. Year after year, cities that have become overcrowded are putting the vulnerable at risk with forced migration.

Globally, there will be more than 9 billion people on earth by 2050 which is an extra two billion mouths to feed.

If policies are right, Africa is primed to tap into the opportunity offered by this population growth. IFAD indicates that economic growth from agriculture in sub-Saharan Africa is 11 times more effective at reducing extreme poverty than any other sector. African governments have to get their priorities right.

The African Union and African Heads of State and Government have designated 2022 as the Year of Nutrition for the continent.

With several themes like strengthening resilience in nutrition and food security, agro-food systems, health and social protection systems for the acceleration of human, social and economic capital development, the AU once again is seeking to drive political momentum for increased nutrition nationally and regionally.

Despite enormous investments to address hunger in Africa over the decades, the Global Nutrition Report shows that 13.7 per cent of infants born in Africa have a low birth weight with stunted growth affecting 30.7 per cent of children aged 0 to 5 years. The governments’ efforts have not been good enough and more than just lip service needs to be done.

A lot of women in Africa have anaemia. Sadly, more than 40 per cent of women in their reproductive years also have a low blood problem.

The 2014 Malabo Declaration 6 agreed to end hunger, reduce child stunting to 10 per cent and reduce underweight to five per cent by 2025. The possibility of meeting this goal is far off with just three years to go.

Declaring 2022 the year of nutrition will amount to nothing if nothing is genuinely done to address the challenges plaguing the agro-food systems in Africa from farm inputs to post-harvest storage and value addition.

African leaders must ensure that smallholder farmers and family-run agriculture SMEs are empowered and made the centre of the continent’s agricultural development priorities. This includes formulating and implementing agricultural policies that are enablers of agricultural output, agronomic research, financing, and inclusive market governance systems that will enable the domestic food demand.

Indeed, the Mennonite Economic Development Associates (MEDA) says that Africa’s 21st-century food system must put families back at the centre of agricultural development.

The international economic development organization that creates business solutions to poverty notes that there is a 1.5-point jump in undernourishment prevalence currently standing at 9.9 per cent. Again, 118 million more people are living in hunger between 2019 and 2020 and the ‘Zero Hunger’ goal of the SDGs may just be a mirage by 2030.

Opportunities and challenges of farming in Africa

This means that governments have to be proactive to empower the farmers who produce 90 per cent of the food on the continent to mitigate the effects of climate change.

Two-thirds of Africans work in agriculture and since the continent has a quarter of the world’s arable land, this is an opportunity that cannot be brushed off. Governments have to ensure that the agro-food systems are aligned to suit the smallholder farmer.

On average, agriculture contributes at least 15 per cent of the continent’s GDP thus the sector, just like IFAD notes in The Field Report is a worthwhile sector to invest in. The investments have to be in the entire agricultural value chain from farm inputs to post-harvest markets.

With one of the youngest populations on the planet, this is a powerful source of innovation and contribution to the agricultural sector. 60 per cent of Africans are under the age of 35 which makes the continent one of the most advantaged when it comes to utilizable work force.

African agriculture has had a lot of problems but still has a lot of potential.

There has been a lot of bad governance in the agricultural sector, with a lot of incoherent and sometimes contradictory agricultural development policies. To date, some state farms are still using colonial agricultural policies hindering reforms and structural changes.

Another challenge is the emphasis on large-scale and medium-sized agricultural farms whose produce is mostly export-oriented.

There is also the uneven and inconsistent integration of small-scale farmers within the agricultural market systems. This is both in agricultural research and post-harvest management as well as economic incentives and market access facilities for small farmers.

The food systems are full of inequalities caused by discriminatory norms and institutions often leading to systemic disadvantages in access to productive resources and denial of rights to marginalized groups.

For a long time, there has been a lack of investment in young farmers and with the advancement in technology there is a huge technical and technological gap.

Generally, Africa has a poor agricultural performance in comparison to other parts of the world but this does not mean that Africans should give up.

If the AU’s designation of 2022 as the year of nutrition is followed through with action on the farms and less boardroom activities, Africa can and should be able to feed itself and the world. It is time for action!

Read: Nigeria splashes US$195 million to power up energy sector