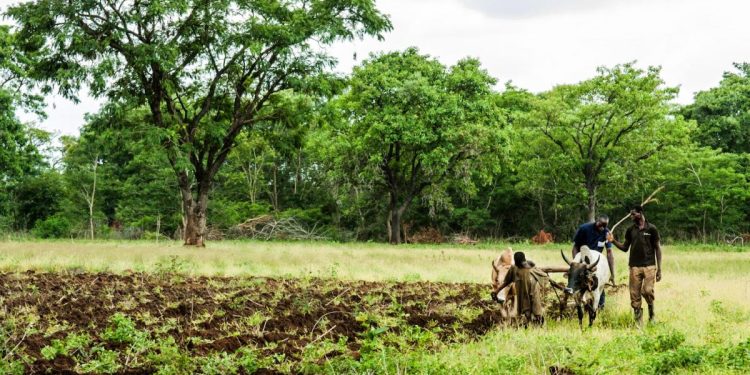 Ivory Coast agriculture sector is extensive as more than half of the nation's land is designated for farming: Photo by Land Portal

Ivory Coast is one of Africa’s largest farms.  More than 60 per cent of the national territory is dedicated as arable agricultural land. Ivory Coast is one of the largest economies in the West African Economic and Monetary Union, and agriculture is its backbone.  Cocoa production is the blood pumping through the economic veins of the Ivory Coast. The West African nation is not only the largest producer of Cocoa in the region but globally (contributing around 30 per cent).

The West African nation of more than 26 million people has almost two-thirds of the population employed in the agriculture sector. Ivory Coast needs to employ extensive programmes to enhance the quality and quantity of yields and processing capacity. The country produces other cash crops such as coffee, rubber, cotton, palm oils, cashew nuts and bananas.

“The country’s main agricultural products are exported unprocessed for the most part.  The government is keen to promote the processing of cashew nuts, cocoa, palm oil (bio-fuels), and other value-added products.  Domestic cashew production reached 900,000 tons in 2020, of which less than 10 per cent will likely be domestically processed.  To increase local cashew processing, the Ivorian government offers an incentive of $0.69 per kg of cashew processed to companies that process cashew nuts,” according to information from the International Trade Administration.

The future of farming in Africa relies on rather stringent and relevant socio-political incentives and strategies to levitate the sector to a higher level. In this case, Ivory Coast stands to become Africa’s and global leading farmer.

Despite its political instability history, the Ivory Coast economy is taking a promising path to prosperity expected to grow by 7.1 per cent this year.

An economic forecast done by Focus Economics projected Ivory Coast’s GDP to expand by 6.7 per cent in 2022. A significant contribution to the economy’s welfare is expected to come from the performance of agriculture, manufacturing industries, mining, energy, transport, telecommunications and trade.

It is essential to note efforts by Ivory Coast to diversify its economy. The country has significant offshore oil and natural gas reserves. Oil giants such as Italian based Eni have already made huge discoveries—oil and gas resources. This comes after US$185 million worth of exploration investment hit Ivory Coast’s energy landscape.

The fate of farming in Ivory Coast

With the dry weather striking cocoa-producing regions for three weeks straight, damaging the quality of cocoa beans and posing a size shrinkage of the April-to-September mid-crop, still, the sector presents a high-value chance of exponential growth.

Since the beginning of the year, hot, dry weather has been raising concern regarding the fate of the highly valued cash crop.

On a broad scale, Ivory Coast is bringing new-age solutions to boost its efforts towards agricultural resiliency in this unprecedented era of climate uncertainty.

A new digital solution—a mobile app is changing the face of farming. This solution enables small scale farmers to browse through various tailored technical information and contact specialist in real-time.

Abrupt climatic changes such as drought and rising temperatures have disrupted farming seasons—thus, the app stands to help them deal with these situations effectively and in real-time. Also, the digital solution is setting up an online marketplace for producers and consumers to exchange information and trade—delivery and payment conditions issues guaranteed.

Ivory Coast has seen a fair share of funds channeled towards developing the cocoa production landscape on investment. Early in February, the US Department of Agriculture announced it would invest US$61 million in the country’s cashew industry over the course of five years (Focus Economics).

Further, the government of Ivory Coast has portrayed its commitment to the cause by sharing a plan to provide a US$20 million aid package to support local processing as only 10 per cent of the local-grown cashews are processed domestically (Focus Economics).

Like any other country, diversifying economic opportunities in a sector is a profitable imperative. There are competitive crops that stand to benefit the sector and economy of the Ivory Coast at large if relevant policies are in place.

Banking on Ivory Coast’s success story on cocoa production, the nation has the potential to capitalize on cereal and grains production, as various think tanks, including Mckinsey argue.

Ivory Coast has the experience and motivation to tap more into its agriculture potential. Cocoa beans production success story is a vivid example and an inspiring story for herself to excel higher in the sector.

Africa's time is now. The case for investment