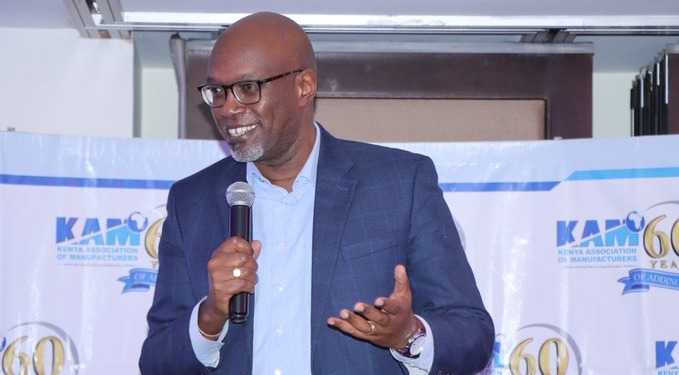 Kunyiha, raised concerns on the severity of the additional taxes imposed on businesses in addition to inflation adjustment on specific rates of duty/KAM

In Kenya, businesses are condemning the high cost of doing business, amidst the economic challenges brought about by the COVID-19 pandemic.

Through the Kenya Association of Manufacturers, business owners have expressed concern on the current focus on politics without practical solutions to bring local businesses back on the recovery track

The Association’s Chairman, Mucai Kunyiha, raised concerns on the severity of the additional taxes imposed on businesses in addition to inflation adjustment on specific rates of duty.

“It is becoming more expensive to operate in Kenya due to the introduction of taxes, fees, levies and charges,” he said.

Kunyiha pointed out the Crop (Nuts and Oil Crops) Regulations 2020 which introduced new fees and levies as a measure to control thirteen (13) scheduled crops.

“Through the 2021 Finance Act, the government has introduced excise tax on raw materials and 16 percent VAT on the supply of some products, effectively increasing the cost of doing business and final consumer prices,” he said.

He spoke during a meeting themed ‘Reduce Cost of Living’.

“In addition, the government has also proposed a 4.97 percent inflation adjustment on specific rates of duty, which is set to have an impact on consumers, manufacturers and negate gains made in the fight against illicit trade,” he said.

Kunyiha observed that the government needs to understand that the introduction of such measures is counterproductive and has acute consequences across all sectors of the economy.

He termed the new tax measures punitive, adding that they are in contradiction of the ‘’Do No Harm’ approach to local businesses on the recovery track.

“The unpredictable fiscal and regulatory policies significantly threaten the Made in Kenya goal and give an upper hand to cheaper imports from other countries. To worsen an already dire situation, last week, Parliament rejected the Public Procurement and Asset Disposal (Amendment) (No. 3) Bill that proposed to amend the Principal Act, further negating efforts to enhance local production and competitiveness, and consequently, the Buy Kenya Build Kenya goal,” he said.

According to Kwame, if private sector growth fails to happen, then economic development shall remain stunted because of the numerous taxes they have to pay.

“As a country, it is critical that we stop gauging our revenue authority’s performance and efficiency, based on their record-breaking rates of tax collection,” he said.

Micro, Small and Medium Enterprises (MSME) Alliance of Kenya CEO, Samuel Karanja called on the government to do away with archaic regulations that hinder SME growth.

“Currently, we have 7.4 million MSMEs in Kenya, but only 1.56 millio are licensed. We urgently need to formalize the cottage industries,” Karanja said.

“This calls for the creation of a conducive business environment, to increase MSMEs competitiveness and productivity. The government can do this through informed and effective policies.”

The government aims to raise at least 1.5 trillion Kenya shillings from new taxes, according to the Treasury Department.

The government also targeted mobile phone airtime and data which amount rose from 15 percent to 20 percent and a 20 percent excise duty on loan fees.

The overall year on year inflation rate as measured by the Consumer Price Index (CPI) for instance rose to 6.44 percent, in July 2021, mainly driven by rise in prices of commodities.

Among the commodities whose prices rose include food and non-alcoholic beverages at 8.84 percent, housing, water, electricity, gas and other fuels at 6.03 percent and transport at 10.33 percent between July 2020 and July 2021.

Pandemic driving use of digital health solutions across Africa: Vodacom

Kenya steps up the up COVID-19 vaccination efforts