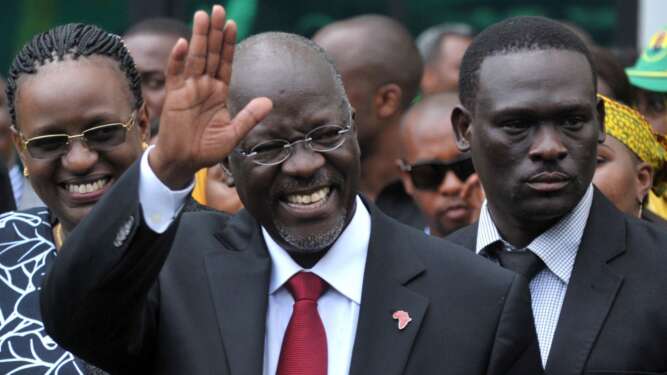 The re-election of Tanzania's President John P. Magufuli stands to be a catalyst for economic growth, if extractives industry continues to be open to foreign investors.

by Giza Mdoe
in Africa, Tanzania
0
Share on FacebookShare on LinkedIn

It is five more years for Tanzania’s incumbent president John Pombe Magufuli after he was announced the winner of the 2020 elections last night.

According to NEC, the president-elect racked in 12.5 million votes of the 15 million people that voted (20 million registered to vote).

With the 85 % popularity vote not only does Magufuli take the top office again but his ruling party CCM also takes a historic position after knocking down all of the opposition strong holds.

In fact CCM has taken over 194 seats (this figure maybe higher) in the 393 member parliament,

In an extraordinary move, Tanzania’ President John Magufuli has invited foreign investors to invest in the country’s extractive industries.

The move comes in the backdrop of profound speculations and misconceptions that his administration is not in favour of foreign investors, especially in the extractive industry.

“This administration does not hate investors, it loves investors,” and with that, the president announced, “…we are open for business.”

The misconceptions were especially propagated following the expulsion of Acacia Gold from the country following allegations of extensive tax evasion and under declaration of export values. Since then, Acacia’s parent company Barrick Gold has been in long stretched talks with Tanzania. The talks finally culminated in a joint venture where Tanzania formed a private company called Twiga Minerals.

“…its why we entered in talks with Barrick,” the president told a press conference at the State House.

“…we hope they (Barrick Gold) become our ambassadors that Tanzania is the best place for investment,” he said amid applause from stakeholders.

“We want a win-win situation…so we may benefit from our resources,” explained the president.

He went on to elaborate the investment invitation saying, “I welcome companies to invest in THE extractive industry …the room is there…we want to do business…we are open for business,” he asserted.

On May 26 this year, the government received $100 million (TZS 230 billion) from Barrick which was the first tranche of $300 million agreed as a goodwill gesture to end disputes between the two parties.

Twiga Minerals Corporation, the joint venture between the Tanzanian government and Barrick Gold Corporation (NYSE:GOLD)(TSX:ABX), has paid a maiden interim cash dividend of $250 million in line with Barrick’s commitment to generate value for all stakeholders through the 50/50 partnership.

Since Barrick took over the former Acacia Mining’s assets in Tanzania just over a year ago, it has paid approximately $205 million to the government in taxes, royalties and dividends in addition to the first payment tranche under the two parties’ agreement to settle pre-Barrick disputes – Barrick Gold

In the same vein, the president decried limitations and bottle necks in the cross border trading of gold between Tanzania and the DRC. He announced that sell of gold and other minerals from the DRC in Tanzania is not only permitted but encouraged.

He cited that the country has now removed 18% VAT and 5% withholding tax from small scale miners. He pointed out that now the country has several demonstration centers in Itumbi and Buke among others along with several centers of excellence in Bukoba, Bariada and songea to mention but a few areas.

The president also insisted on the follow-up for the payment of Rehabilitation Bond to care for the environment whose fees he said are been avoided by many companies.