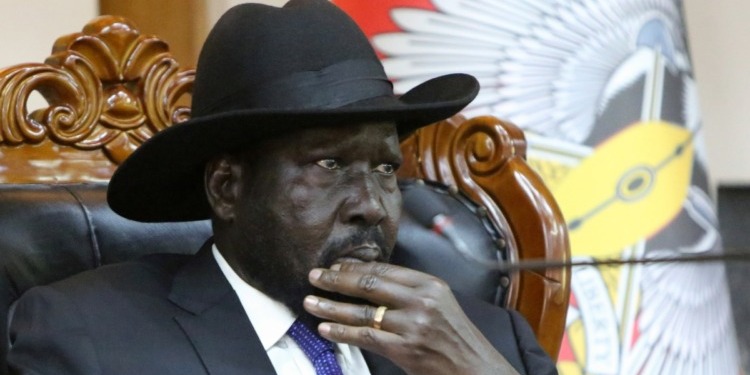 This plundering also continues to fuel political competition amongst elites, and is a key driver of the on-going conflict / PHOTO: Reuters

Plundering continues to fuel political competition amongst elites, and is a key driver of the on-going conflict

Leaders of South Sudan are diverting staggering amounts of money and other wealth from the country’s public coffers and resources, undermining human rights and endangering security.

This is according to the Commission on Human Rights in South Sudan which has found in its latest Conference Room more than $73 million USD was diverted since 2018, including transactions worth almost $39 million USD in a period of less than two months.

The Commission noted that this figure is only a fraction of the overall amount looted.

For instance, President Salva Kiir himself admitted as far back as 2012 that South Sudan’s ruling elites had diverted more than $4 billion USD.

The report also found that illicit diversion of State resources has severely undermined the economic, social and cultural rights of citizens.

It added that this plundering also continues to fuel political competition amongst elites, and is a key driver of the on-going conflict, violations and serious crimes, jeopardising the prospects for sustainable peace.

The Commission’s recommendations aimed at the Government of South Sudan seek to ensure that the State is able to protect and fulfil the rights of its citizens.

The Commission’s Conference Room Paper also highlights that South Sudan’s elites have deliberately adopted a highly informal system of oil revenue collection, in which the absence of independent oversight and transparency facilitates and enables the misappropriation of public funds.

In just one emblematic case, the Commission revealed how a single payment made unlawfully in May 2018 by the Ministry of Finance to Sudanese businessman Ashraf Seed Ahmed Al-Cardinal, also known as “Al Cardinal”, represented a staggering 21.6 per cent of South Sudan’s total budget for the “Use of Goods and Services” and “Capital Expenditure” for the entire 2018/2019 fiscal year.

“The Commission’s documentation of the corruption, embezzlement, bribery, and misappropriation of State funds by political elites is merely the tip of the iceberg”, stated Commission Chair Yasmin Sooka.

“Our investigations traced exactly how this money is being diverted, and our findings revealing the patterns and trends of the embezzlement include the involvement of politicians, Government officials, international corporations, military personnel, and multinational banks in these crimes. The Ministry of Finance and Economic Planning, the National Revenue Authority, and a number of foreign corporations have all been complicit in this”, she added.

The Commission’s Conference Room Paper also emphasises and draws a link between the illicit diversion of funds and the inadequacy of resources available to public authorities to fulfil their legal obligations to provide for the enjoyment of economic, social and cultural rights of citizens.

“The violations of human rights and related crimes we have been investigating refer to a broad category of activities involving money, finances, or assets, the purpose of which is to unlawfully obtain a profit or advantage for the perpetrators”, explained Commissioner Andrew Clapham.

“These activities are proscribed by both national legislation and international law, including the Transitional Constitution of South Sudan, the Anti-Corruption Commission Act, and the Investigation Committees Act. As a State party, South Sudan is further bound by the UN Convention against Corruption. Accordingly, other States party to that Convention may be obligated to repatriate funds that originated in South Sudan and were illicitly used to purchase real estate abroad, as we have documented in considerable detail”, he added.

The Commission’s report also highlights that South Sudan’s oil industry is dominated by unaccountable oil consortia, the actions of which have wrought considerable devastation, including environmental degradation and damage impacting on the health of citizens.

Oil spills in the Pariang and Rubkona counties of Unity State, for example, have led to pre-term births, stillbirths, congenital anomalies or deaths in new-borns, blindness, male sexual dysfunction, and low fertility.

“We have analysed a series of preventable health incidents induced by disease and devastating birth defects, including many that can be directly attributed to the presence of crude oil contamination in water, contributing to environmental degradation”, stated Commission Chair Yasmin Sooka. “The harm wreaked by these major oil consortia on local communities, and in particular the impact on infants who continue to suffer from severe birth defects, is utterly egregious and devastating for families”, she added.

The Commission also underscored that the illicit gains from economic crimes also serve as a major driver of armed conflict in South Sudan.

This comes at a time when the country is facing its worst ever hunger crisis at it marks 10 years of independence, with at least 7.2 million people or 65% of the population, on the brink of starvation with civil war, climate shocks and high food prices fuelling the situation.

Data by Save the Children indicates that some 1.4 million children are expected to suffer from acute malnutrition this year, the highest figure since 2013.