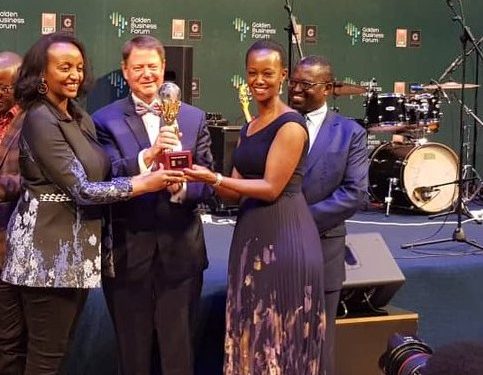 by Kawira Mutisya
in Africa, East Africa
0
Share on FacebookShare on LinkedIn

TradeMark East Africa has been feted by the Rwanda Trade body Private Sector Federation (PSF) for its work in reducing barriers to trade in Rwanda.

East Africa is one of the fastest growing blocs in the world, however, the potential of the EAC in regard to growing regional trade is yet to be fully achieved.

“This is partially due to the fact that as individual member countries pursue their national industrial policies, they are likely to implement measures that counter regional integration obligations. As a result, trade disputes and non-tariff barriers persist,” Kenya Association of Manufacturers CEO Ms Phyllis Wakiaga said in a statement.

During the presentation of the award at the inaugural Golden Business Forum (GBF), held in Rwanda’s capital, Kigali, TMEA was recognised for it’s visionary trade facilitation work in the East African region, as well as the consistent track record of building partnerships with private and public sector to enable Rwanda citizens from all walks of life, trade easier across borders.

PSF Chief Executive Officer, Stephen Ruzibiza, said that TMEA was awarded for its, “Exceptional foresight and creating a business environment that has changed considerably the everyday lives of traders in Rwanda,” he said.

TMEA is a leading regional trade facilitation body that has partnered with the government of Rwanda since 2011; where the two have supported interventions that have contributed to reducing barriers to trade in the country.

TMEA is structured to work with both the government and the private sector; to whom it provides support in two ways; firstly, financial support and secondly technical assistance. For the last 8 years, TMEA partnered with Rwanda’s Ministry of Trade and Industry, former Ministry of EAC Affairs, Rwanda Revenue Authority, Rwanda Standards Board, Rwanda Development board, Rwanda Ministry of Transport.

It continues to support projects implemented by Private Sector Federation, PRofemmes Twese Hamwe, Chamber of Commerce among others. In these partnerships, it provided financial support for the implementation of the Rwanda Electronic Single Window which has contributed to reducing the time taken for customs clearance, construction of One Stop Border Post at Kagitumba; assisting Rwanda Standards Board to upgrade its laboratories so as to become a trusted global mark of quality; working with RALIS to certify key export products like honey, so they can access international markets.

Strides, have therefore been made in an attempt to regain the trade value within the EAC. In order to address a variety of NTBs, the Community developed and assented the EAC NTBs Act 2017 and established committees to identify and monitor the progress of the implementation of the Act.

So, how does it all come together, all these interventions, state TMEA’s mission, will enable Rwanda citizens prosper through trade, by having the right products, accessing markets quickly and affordably.

According to TMEA’s Chief Executive Officer, Mr. Frank Matsaert, said that beyond the infrastructure development, the organisation considers its critical success as, enabling Small and Medium sized businesspeople to trade easier, access markets and improve their livelihoods and that of their employees.

From the enterprise packaging mushrooms for export in Kigali, to the cooperative in Nemba that is aggregating beans for its members and therefore able to negotiate for better prices; to the women in Kagitumba who after acquiring maize gridding machines and training in value addition, now package and sell maize flour across borders.

Traders like Benigne Maliboli, who was a beneficiary of TMEA’s work with Profemme, speak to the power of having the right information. Like many other traders across Rwanda, Benigne lacked an awareness of the traders’ rights, rules and regulations put forward by the East African Community, at the border; but after TMEA’s intervention she testified that, the traders now know that there is someone at the border who can assist small-time cross-border traders, giving them information we need about both sides of the border.

“Before, we were not aware that such services existed at the border,” Benigne said in a previous interview. TMEA will for the next five years support construction of harbour facilities at Rubavu and Rusizi ports of Lake Kivu; and also work with the government in the implementation of its industrial park development strategy.

“We are also keen to support adoption and implementation of quality standards for honey, tea, coffee, meat and horticulture, and ensure that traders have access to this information and understand it,” said Matsaert.

Automation of trade processes will remain central to TMEA’s interventions in Rwanda as the organisation deepens its support for women in trade.

“We are looking at a future where our interventions create sustainable livelihoods for women like Maliboli, creation of additional employment opportunities as investors capitalise in the transport and manufacturing sectors and export growth,” said the CEO

TMEA implemented its first phase of programming in Rwanda between 2011 – 2018 and an independent evaluation indicated that the projects had a 28 per cent return on investment (ROI) while inducing US $ 100 million worth of trade.

TMEA is currently undertaking an expansion plan into the Democratic Republic of Congo, the Horn of African and some South African Countries. The organisation has been referenced to as a critical informer to the actualisation of the African Continental Free Trade Area Agreement (AfCFTA) based on its experiences in Trade Facilitation in East Africa. The Golden Business Forum awards are organised by Rwanda’s PSF to spotlight initiatives that create a conducive business environment in Rwanda. They will be held annually.

EAC has also harmonized over 1400 standards that have been endorsed by the member states to facilitate trade and established One Stop Borders Posts, to reduce the time taken to clear goods at the border post. The EAC also approved the EAC Customs Valuation Manual to guide the implementation and uniformity of the interpretation of EAC Customs Value Provisions.

Also Read:How Kenya is arming itself to fight counterfeits