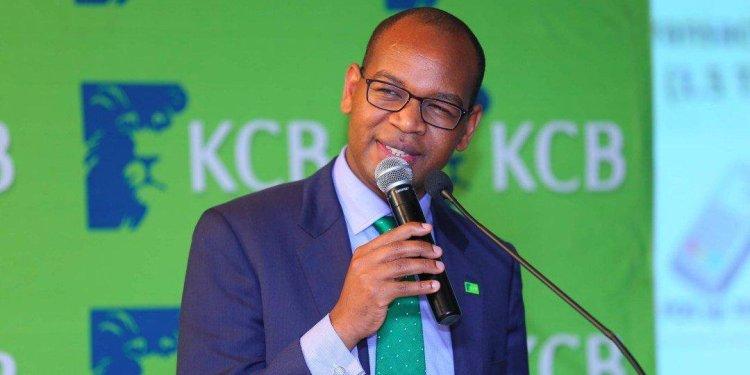 KCB bank is looking at additional markets for expansion while it awaits a licence to operate in Ethiopia, where it already has a representative office

by Caroline Muriuki
in Banking, Democratic Republic of Congo, Ethiopia
0
Share on FacebookShare on LinkedIn

Kenya Commercial Bank (KCB ) plans to venture into Ethiopia and the Democratic Republic of Congo (DRC) as it seeks to grow its regional footprint.

The bank is looking at additional markets for expansion while it awaits a licence to operate in Ethiopia, where it already has a representative office that was opened in 2015.

“We are talking about two markets in trying to scale up our businesses so the market we are looking at is Congo and Ethiopia because they are very much aligned to our business,” said Joshua Oigara chief executive.

“For us, there is a chance to really grow our business to reach the psychological height of Sh1 trillion of balance sheet size which is a strong size,” he added

Mr Oigara did not provide a timeline for when the bank will enter DRC. The bank also operates in Uganda, Tanzania, Rwanda, Burundi and South Sudan.

The bank’s CEO Joshua Oigara said that the lender would venture into the two markets to grow revenues and expand its operations across the region.

With KCB opening a branch in DRC, it will be in competition with its local rival Equity Bank which recently deepened its presence in DRC after acquiring Congo’s second-largest lender Banque Commerciale du Congo (BCDC).

Access to banking services in the DRC is lower than in other countries in sub-Saharan Africa. statistics show that about 90 per cent of the population is unbanked.

The Ethiopian market is home to over 100 million people with only about 15 per cent of the population having a bank account.

Earlier this year, Mr. Oigara said that KCB’s presence in Ethiopia would be through a mobile lending platform, through a partnership with an Ethiopian bank to operate a fully-fledged subsidiary by the end of 2020.

In the first six months of 2019, KCB’s profit hit Ksh12.7 billion, surpassing its rival Equity Bank whose half-year net earnings increased from nine per cent to Ksh12 billion, in the period.