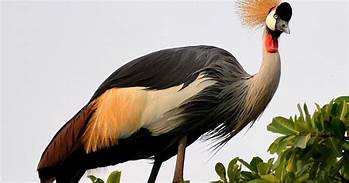 The grey crowned crane adorns the centre of the national flag and also the official coat of arms.

For those who do not know, the animal symbol for Uganda is the Crane.  Majestic and rare to Uganda, the grey crowned crane represents the symbol of wealth, hope and fidelity. The crane appears on the national flag as well as on the country’s official coat of arms. The crane adorns several of the country’s currency and coins minted by the Central Bank of Uganda.

A private Member’s Bill was tabled recently and the details therein, “…seek to amend the Constitution as a way of streamlining the management of the Central Bank,” according to local news.

Termed the Constitutional Amendment Bill, 2020, it was tabled before Parliament during a plenary sitting and was subsequently referred to the Committee on Legal and Parliamentary Affairs.

The Bill is clear in its objectives, and number one on that list is to remove not only the Governor but also the Governor’s Deputy from chairing the Central Bank’s Board.

In effect, it calls for the governor’s resignation from the board; it looks to have Article 161 of Uganda’s 1995 Constitution amended so the governor shall not double as the chairperson of the Bank of Uganda (BoU) Board.

The Bill has its background in the 2019 report of Uganda’s Committee on Commissions, Statutory Authorities and State Enterprises (Cosase). After investigating the closure and selling of several of the country’s commercial banks, it was brought to light that the Board, which was charged with the investigation, could not sufficiently conduct its duties in a transparent and uninterrupted manner because its Chairperson and the Deputy Chairperson were the same ones being investigated.

In other words, the body that was conducting the investigation was being chaired by the person who was in effect being investigated, an obvious conflict of interest.

It should be noted that at the moment, the Bill seeks to amend the country’s Constitution because for now, the Governor of Uganda’s Central Bank is appointed by the country’s president as are all Board Members. Now the Bill wants to add certain clauses to this appointment including specific terms on the duties of the said offices and the functions of the governor as well as his deputy governor.

The Bill proposes among other things, the functions of the Governor to be:

Clause 1(3) of the Bill states; “the Governor and other members of the Board shall;

Whereas the proposed Article 161A provides for the office of the governor, the holder of the office would have his or her functions provided for in the new Article 161B.

Members of Uganda’s parliament moved to support the bill and in 45 days the Bill will placed before the House for deliberation. If passed, this would be the first time the country has removed from chair the sitting Chairperson of the Uganda Central Bank Board of Directors and would in effect have clipped off the powers of his office.

By merit of minting the country’s money, the office of the Central Bank Governor is symbolized by the Crane on the National Coat of Arms that appears on almost all the currencies that he authorizes.

Uganda adopted the Crane as its national symbol and then christened every colour on the bird to symbolize an aspect of the country. Black is for the people, yellow represents the sun from which Uganda gets its livelihood in agriculture and red represents the brotherhood of Ugandans with Africa and the world.

Intra-EAC trade on the decrease