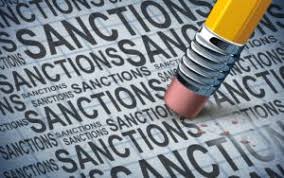 Following the lifting of the sanction, Zimbabwe now has access to credit

The U.S. has announced that at least two of Zimbabwe’s national banks are now allowed to operate without sanctions.

It is now almost 20 years of sanctions for Zimbabwe so this development comes as a breath of fresh air for the otherwise economically suffocating country. The U.S., backed by the European Union imposed the sanctions back in 2002.

Ever since then, several state organs like the said banks and a host of several government officials were black listed for sanctions and restriction of movement following allegations of widespread human rights abuse.

Zimbabwe’s economy has ever since been on murky ground, inflation rate has been overboard hitting the highs of 600 percent. Only in May this year the Zimbabwean dollar suffered such a drastic drop in value that its inflation went to more than 670% and is expected to soar to over 1000% by the end of the year.

What this means is that, the cost of living for the average Zimbabwean will go up 1000 times by the end of the year!

Since this increase in cost of living is not buffered by any increase in household income, it can be expected that the country will fall into profound socio-economic chaos. Is that why the U.S. has finally decided to crack open room for borrowing by lifting sanctions on the two banks?

For awhile now, the African Union has been beseeching the international community for the unconditional lifting of the sanctions. Speaking recently during the Africa Day celebrations, Chairperson of the African Union, Mr. President Cyril Ramaphosa reiterated the call.

Citing Zimbabwe as a vulnerable country, he urged the West and the donor community to lift the sanctions that bind the country.

New prospects: What ease of sanctions means for Zimbabwe

Zimbabwe’s Finance and Economic Development Minister, Mthuli Ncube, sees the lift of sanctions as a game changer for the country.

He described it as a positive step that will now clear the avenue to access credit lines. Up to these point, the sanctions made it impossible for the banks to get loans from the international community which means they in turn could not offer credit.

“Now that the sanctions have been lifted, the banks will find it easier to do business going forward. So this is a very welcome development indeed,” local media quotes the minister.

Only recently, Zimbabwean artisanal miners for gold could not operate because the country had no cash. This problem had its roots in the grounding of flights and closing of boarders in a bid to fight the deadly global pandemic. As a result, the country could not get dollars flown in and as a result, miners could not buy the inputs they needed.

Since the country’s currency, the Zimbabwean dollar has little to no value at all, traders and consumers alike use the US dollar for all kinds of trade. So without the dollar, trading is affected.

In this regard, the country stands to gain tremendously by the lifting of the sanctions since credit offered to the banks will be used internally. When the money is issued to companies and institutions like small commercial banks and other lenders, the common man can access the funds as well.

So again, accessing funds to keep companies in production while increasing the purchasing power of the public will greatly stimulate the economy.

However, how far will the banks be able to go remains to be seen and this may greatly rely more not on their part but rather on the international community. Even with sanctions been lifted, lenders may still be skeptical to lend a country that has been out of business for almost two decades now.

There is also the matter of terms and conditions of the loans that they would extend to Zimbabwe. How tough will the terms be, will they take advantage and stifle the country with high interest rates that would enslave the country in masses of heavy debt for years to come?

So, while the lifting of the sanctions for these two key institutions is very much welcomed, much remains to be seen as to the outcome in both the short as well as the long term. All in all, Zimbabwe needs to produce and trade with its neighbours and further abroad so this new line of credit will go a long way in supporting that.

Kenyan travel-tech HotelOnline on major onslaught of the African market