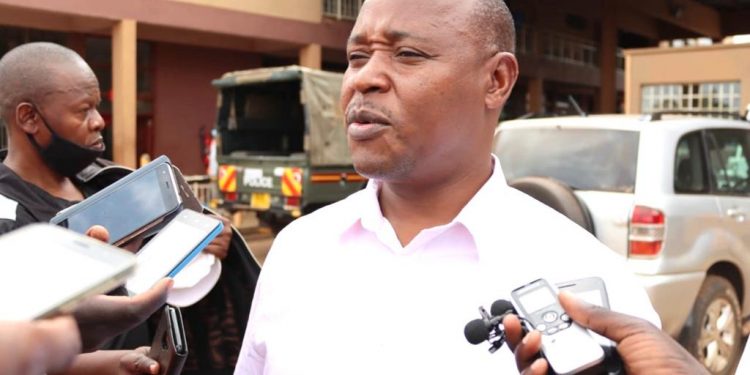 Its Kenya’s turn at the helm of EAC trading bloc!

It is a new dawn for trade and prosperity in East Africa as the Chief Executive Officer of the East African Business Council Dr. Peter Mutuku Mathuki is appointed as the incoming Secretary-General of the East African Community by the 21st Ordinary Summit of the EAC Heads of State held virtually on 27th February 2021.

It is a new dawn for trade and prosperity in East Africa as the Chief Executive Officer of the East African Business Council Dr. Peter Mutuku Mathuki is appointed as the incoming Secretary-General of the East African Community by the 21st Ordinary Summit of the EAC Heads of State held virtually on 27th February 2021.

Dr. Mathuki holds a PhD in Strategic Management & Regional Integration from the University of Nairobi, Kenya. As the Chief Executive Officer of the East African Business Council (EABC) he has been instrumental in driving and articulating the Private Sector priorities in EAC decision-making process.

As the EABC CEO, Dr. Mathuki has been instrumental in implementing the turn-around strategy of the East African Business Council under the vision of a borderless East Africa for increased business and investment. He has spearheaded many international, continental and regional high-level public-private dialogues aimed at resolving bottlenecks hindering the growth of intra-EAC trade and investment such as the High-Level East African Business and Investment 2019. His diplomatic leadership improved recognition of the role of the private sector in the EAC from Observer Status to True Partner of the EAC regional integration agenda. He has taken part in continental and international negotiations where he successfully pushed for the formation of the African Business Council. He has been vital pushing for business and economic resilience of the EAC bloc amid the COVID-19 pandemic, resolving Non-Tariff Barriers in the region and repositioning the EAC bloc to reap the benefits availed by the African Continental Free Trade Area (AfCFTA).

The business community joins his efforts and vision of steering intra-EAC trade to greater heights in his new role as the Secretary-General of the East African Community.

Dr. Mathuki is an expert in regional integration and has served in several regional organizations. He formerly served as a Member of Parliament of the East African Legislative Assembly (EALA), where he chaired the EALA Committee responsible for good governance and served in the Committee of Communication, Trade and Investment (CTI). He previously served as a Director in charge of International Labour Standards (ILO) at the International Confederation of Free Trade Unions (ICFTU-Africa which later became ITUC-Africa) and later in the European Union (EU) programs for Africa based in Asmara, Eritrea.  He sits in several boards such as the Kenya Investment Authority (Ken Invest), Nairobi, Kenya, Inter-University Council for East Africa (IUCEA), Kampala, Uganda and CENTRE OF EXCELLENCE FOR ICT IN EAST AFRICA ([email protected])  located at the Nelson Mandela African Institution of Science and Technology (NM-AIST) in Arusha, Tanzania. He is also a member of the Kenya Institute of Management (KIM).

Dr. Mathuki is passionate about regional integration and has played a vital role in the implementation the African Continental Free Trade Area (AfCFTA) and the formation of the African Business Council. He was equally instrumental in the negotiation of the EAC Common Market Protocol and Regional economic issues since 2004. He strongly supported the formation of various EAC platforms; instrumental in the EAC regional integration process. These platforms include the formation of East African Labor and Employees’ Organizations in the EAC.