by Wanjiku Njugunah
in Business, Uganda
0 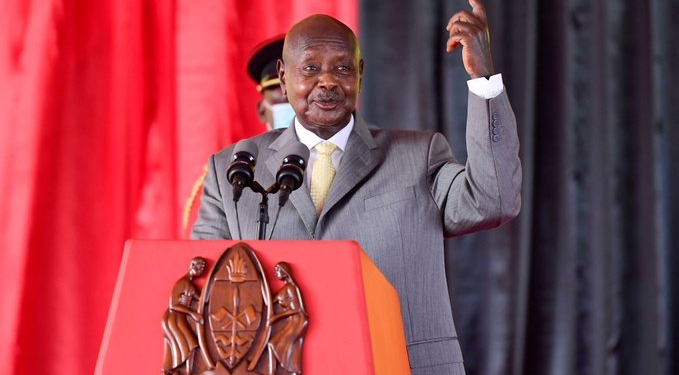 Institutions of learning across Uganda have been closed since March 2020, following a directive by President Yoweri Museveni, in a bid to curb the spread of COVID-19 / Yoweri Museveni.

Uganda’s education sector is on course in rolling out the new lower secondary school curriculum when schools reopen in January 2022.

This is according to the Prime Minister and Leader of Government Business in Parliament, Robinah Nabbanja.

Nabbanja said the government has recruited and deployed 1,598 staff in the newly completed seed secondary schools under the Uganda Inter-governmental Fiscal Transfers Programme.

“The recruitment of the remaining 1,409 posts has also commenced and will be completed in this financial year 2021/2022,” said Nabbanja.

According to the premier, staffing and purchase of instructional materials are key areas in ensuring effective implementation of the new curriculum.

Institutions of learning across Uganda have been closed since March 2020, following a directive by President Yoweri Museveni, in a bid to curb the spread of COVID-19.

She explained that Government has also identified Shs45.8 billion that will support the recruitment of 3,594 teaching and non-teaching staff over a two-year period.

Nabbanja said that instructional materials for the lower secondary curriculum, that is, senior one and senior two, have been procured and will be delivered by end of January 2022, whereas the procurement of materials for senior three and senior four is ongoing.

The Prime Minister was on Thursday, 02 December 2021, responding to queries by Bukomansimbi Woman MP Hon. Veronica Nanyondo on whether Government has the structural and financial readiness to implement the new curriculum and whether stakeholders were involved in its formulation.

87,500 Ugandan households to get electricity in last mile connectivity

The Premier responded by saying that Government through the National Curriculum Development Center made wide consultations during the formulation of the new lower secondary curriculum.

She added that a new Teacher Education programme to equip teachers with relevant competencies needed to deliver on the curriculum has been developed and that funds have been provided in the 2021/2022 budget to retool 20,000 teachers of senior one and senior two.

“A training strategy was developed for retooling the in-service teachers on the new curriculum and this will continue in the subsequent years. To date, a total of 30,000 teachers out of the projected 50,000 in both government and private schools, have been retooled,” Nabbanja said.

The Prime Minister also told the House that each of the 6,000 secondary schools, both government and private, had received copies of the new syllabus.

The project development objective is to enhance access to lower secondary education by focusing on underserved populations in targeted areas, who include communities hosting refugees, girls and people with limited access to public lower secondary schools.

The loan that will be provided by the International Development Association of the World Bank Group has been approved by the House owing to the fact that it is consistent with the external debt principle that requires borrowing for social sectors to be on concessional terms.

While presenting a report of the Committee on National Economy as regards the loan on Wednesday, 01 December 2021, Committee Chairperson Ikojo John Bosco told the House that the loan is concessional in nature with a significant grant element.

He explained that the loan is consistent with the medium-term debt strategy for the financial year 2020/2021 that prioritizes external financing over domestic financing with a preference to concessional borrowing.

“This project is economically viable given the merits that will accrue from enhanced access to lower secondary education…as well as the improvement in the education system,” said Ikojo.

Speaking on the loan request, the Leader of the Opposition in Parliament, Mathias Mpuuga said Uganda ranks lowest in the sub-Saharan region in financing education with a percentage of GDP at 2.4.

He urged legislators to consider these facts while approving requests to borrow funds to uplift the education sector so as to keep alive the obligations and attendant future challenges that may come up.

“In the third year of the project, the government is supposed to offer counter-funding the equivalent of Shs75 billion. The Minister of Education and that of Finance should confirm to Parliament that this money will be tabled in the budget framework paper later this month so that we have a yearly report on it until its financing,” said Mpuuga.

Kiboga East County MP, Keefa Kiwanuka, said his major concern is on Government’s preparedness to implement the project because the loan has a commitment fee where money set aside, if not used, raises the commitment fee. He sought government assurance from Parliament that they are prepared to start on the project.

Finance Minister Matia Kasaija informed Parliament that of the US $90 million loans, there is a grant of US $60 million. He said that if the loan were not taken up, then it would be withdrawn along with the grant.

In the Committee’s report, it was observed that in the recent past, the tax-to-GDP ratio stagnated at 12 per cent while the ratio of public debt to GDP increased to 35.6 per cent. The Committee recommended that Government revises tax exemptions and tax holidays as well as other means of enhancing domestic revenue mobilization.

The committee also recommended that government continues reviewing operations with a view of eliminating wasteful or inefficient expenditure, so as to reduce spending pressures.

In addition, the Committee observed that most of the designs for school projects are implemented without the involvement of Local Governments during the planning level, which caused designs to be defective.

The report by the Committee on National Economy follows a directive by the Speaker of Parliament made on 01 September 2021, to study the loan request and report back to the House on its viability.

The loan is expected to fill the gap of 116 schools and absorb the growing number of school-going children in Uganda, and thus achieve the national goal of universal secondary education by 2025.

Who decided that "Omicron" is African?