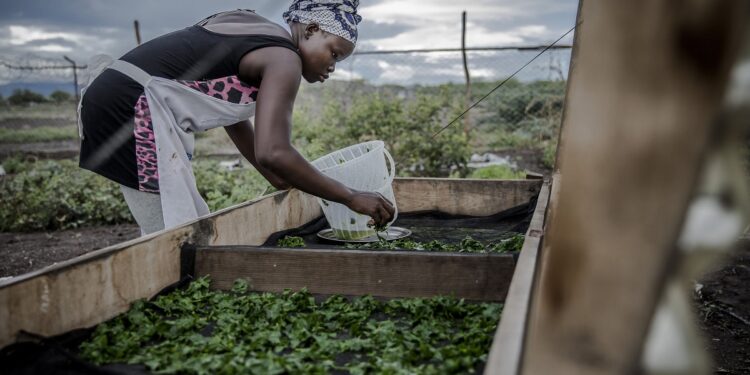 A farmer drying some vegetables. Ten selected priority commodities will get US$1.57 billion in funding over five years from the AfDB. [Photo/FAO)

Projections suggest that Africa spends billions of dollars buying food it should be producing, thus food security for the continent remains a pipe-dream.

For African governments, unemployment remains a major concern. Yet Africa is missing out on job prospects afforded by agricultural production, the region’s largest employer and source of employment on the continent.

Projections suggest that Africa spends billions of dollars buying food it should be producing, thus food security for the continent remains a pipe-dream. A 2019 Brookings study estimated that the cost of importing food would reach US$43 billion that year.

Earlier in 2017, the African Development Bank (AfDB) President Dr. Akinwumi A. Adesina said that Africa would be spending an estimated US$110 billion by 2025 on food imports which would further weaken African economies by decimating agriculture and exports jobs in the sector.

African food imports have risen in the last few decades, reaching nearly US$35 billion a year, according to the World Bank. Most imported goods could be made in Africa, creating much-needed jobs in the process.

It is with this knowledge that a coalition of multilateral development banks and development partners has pledged more than US$17 billion in finance to combat rising hunger in Africa and improve food security.  This funding was pledged on the final day of the Feeding Africa: Leadership to Scale Up Successful Innovations on April 29-30, 2021.

The two-day high-level debate was held in conjunction with the CGIAR System Organization and the Forum for Agricultural Research in Africa (FARA), the AfDB and the UN’s International Fund for Agricultural Development (IFAD).

An agreement was struck by a total of 17 African heads of state that aims to double agricultural production by increasing the use of agricultural technologies. Investing in market access and fostering agricultural research and development are also part of this strategy.  At the conclusion of the meeting, the participants signed a joint statement stating their promises.

Ten selected priority commodities will get US$1.57 billion in funding over five years from the AfDB, which has pledged more than US$10 billion of the total pledges. As a result, countries will be better able to sustain themselves.

A further US$8.83 billion will be invested over the following five years in order to strengthen these commodities’ value chains and make them more competitive. In addition, there will be programmes to support the development of young people, especially women.

Dr.  Adesina called on all stakeholders to forge a stronger collaboration and create a partnership for greater scale and to take technologies and ideas to the continent’s hundreds of millions of farmers.

Over the next three years, IFAD plans to contribute an additional US$1.5 billion to help African countries transform their food and agricultural systems.

A larger portion of IFAD’s budget will go toward laying the groundwork for greater agricultural output. An increasing number of investments are being made in the Sahel region to help restore land, create jobs, and increase resilience to climate change.

Creating 10 million jobs in the region by 2030 will help meet the goals of the Green Great Wall. The Great Green Wall initiative is an ambitious African-led movement to grow an 8,000km natural wonder of the world by restoring Africa’s degraded landscapes across the continent to provide food security and jobs while also creating an ambient environment for the millions of Africans who live along its path.

IFAD President Gilbert Houngbo said that the African leaders’ commitment to increasing agricultural productivity and improving food security for millions of Africans is a step in the right direction.

The World Bank notes that Africa’s small-holder farmers can offer more inexpensive food to customers and create excellent jobs for millions of young Africans involved in the processing, storage and marketing of food which will help modernize African agriculture.

Farming systems and food security in Africa will get US$1.5 billion from the Arab Bank for Economic Development in Africa (BADEA) between 2020 and 2024. In the next three years, the Islamic Development Bank Group plans to invest US$3.5 billion in the sector.

Commodity value chains will be developed for both basic foods and cash crops, according to the stakeholders.

Towards this endeavour, the Bill & Melinda Gates Foundation has pledged US$310 million in the next three years as part of a coalition of development partners. African agricultural R&D projects will benefit from this.

It is hoped that this financing will help empower 300 million farmers with a wide range of innovative technologies.

Senegalese President Macky Sall summed up the efforts of African heads of state as under:

These recommendations were mirrored in the forum’s communiqué, which emphasized the need for an African food security funding facility.

Climate resilience and effective agricultural technology may be scaled up using this method, it was considered. Farmers across Africa will be able to take advantage of digital technologies to better combat malnutrition and stunting as a result of this initiative.

As a result, sub-Saharan Africa boasts a quarter of the world’s arable land, but only produces 10 per cent of the world’s food. African agriculture is unable to compete because of the low yields of staple crops. A third of the continent’s caloric intake comes from outside sources. Because of this, food systems are increasingly fragile and reliant on outside sources of food.

Increased demand for food in Africa is the potential to create jobs especially with the implementation of the African Continental Free Trade Area (AfCFTA).  Generally, intra-African trade has a lot of untapped potential thanks to the AfCFTA.  As of now, approximately 20 per cent of the food imported by African countries comes from other African countries.

As a means of reducing Africa’s reliance on food from countries outside the continent, AfDB President Adesina has frequently urged the acquisition of new technologies that revolutionize agricultural productivity.

He adds that the technologies needed for Africa’s green revolution are already available, but they are unused because of a lack of policy support.

Read: The 1.7M dollar buzz from the bees in Tanzania