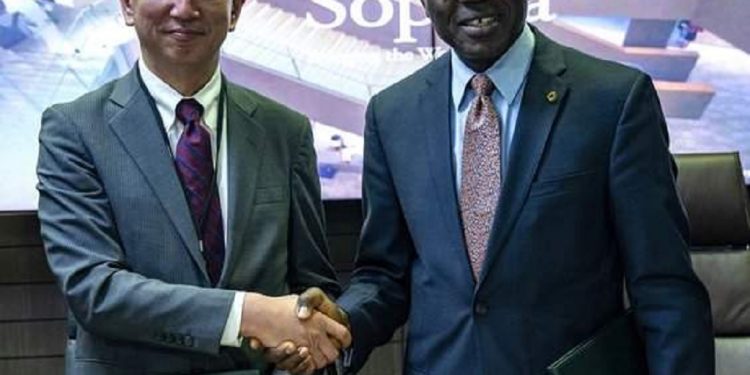 The African Development Bank and Sophia University in Japan, have signed a Memorandum of Understanding to promote capacity development within the two institutions.

Signed on Friday at the Bank’s Abidjan headquarters, the MoU is for the two institutions’ mutual benefit and the entire African continent.

“It is our sincere wish that this day will be an opening of bright future possibilities for all of us. We strongly hope our coming together today is not for a mere signing of an agreement, but a step towards shaping the future world,” said Professor Terumichi Yoshiaki President of the university, who signed for his institution.

Sophia University, a leading private Jesuit university with a student population of 14,000 (2018), is one of many in the country that host the Japan-Africa Scholarship.

The university provides two-year scholarships to high achieving African graduate students to enable them to undertake post-graduate studies in priority development areas on the continent and abroad.

The AfDB Group’s office in Japan and the Human Capital Development Department will continue working closely with Sophia University, to support the Bank’s engagement with Japanese academic institutions and to broaden the university’s knowledge base about Africa, Terumichi said.

Boost to Light up and Power Africa initiative

Speaking at the signing ceremony, African Development Bank Senior Vice-President, Charles Boamah, recognized the importance of the new partnership with the university saying it will be a win-win strategy to improve both organizations’ activities.

“The MoU also supports Sophia University’s capacity to educate Japanese young people to be ready to work for the Bank,” he said.

“By doing this, we at the African Development Bank would like to give positive impact to the Light up and Power Africa initiative, one of our important strategies to create sustainable development in the continent,” Boamah added.

Cooperation between the two organizations dates back to 2015 when the Bank’s Asia External Representation Office and Sophia University signed an education partnership agreement.

The Light Up and Power Africa initiative is meant to provide universal access to electricity in the continent.

AfDB says that currently, over 640 million Africans have no access to energy. This corresponds to an electricity access rate for African countries at just over 40 per cent which is the lowest in the world.

The Per capita consumption of energy in sub-Saharan Africa (excluding South Africa) is 180 kWh, compared to 13,000 kWh per capita in the United States and 6,500 kWh in Europe.

Access to energy is crucial not only for the attainment of health and education outcomes but also for reducing the cost of doing business and for unlocking economic potential and creating jobs.

Insufficient energy access manifests itself in hundreds of thousands of deaths annually due to the use of wood-burning stoves for cooking. It also handicaps the operations of hospitals and emergency services.

Lack of energy also compromises educational attainment and drives up the cost of doing business.

The Bank says, “Energy access for all is, therefore, one of the key drivers of inclusive growth as it creates opportunities for women, youths, children both in urban and rural areas.”

The continent has huge potential especially renewable energy which is enormous yet only a fraction of it is being currently employed.

Hydropower provides around a fifth of current capacity but not even a tenth of its total potential is being utilized.

Similarly, the technical potential of solar, biomass, wind and geothermal energy is significant.

While renewable energy will be prioritized by the Bank, fossil fuels will remain an important part of the overall energy mix, as is the case with several developed economies, with the Bank financing state of the art technology to minimize emissions.

You can also read about South Sudan’s non-oil revenue hitting a new record and why Africa will have better-negotiated trade deals with how safe, controlled migration benefits African countries.