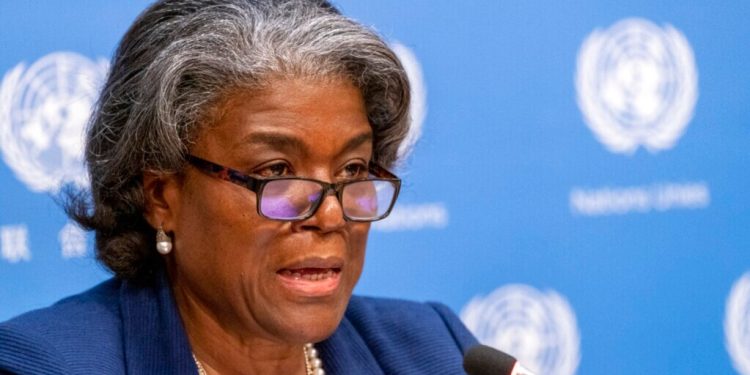 US Ambassador to the UN Thomas-Greenfield said there is no neutral ground and that the Russia-Ukraine was not just about the Cold War between the West and Russia.

Russia’s invasion of Ukraine could impact relations between the United States (USA) and Africa as global economic and military powers compete for influence on the continent.

by Pierre Afadhali
in Countries
4

Russia’s invasion of Ukraine could impact relations between the United States (USA) and Africa as global economic and military powers compete for influence on the continent.

Pulling Africa into the West’s war with Russia

But, many African countries are staying neutral on the conflict which is not sitting well with the West.

Indeed, on March 18, 2022, the US ambassador to the UN, Linda Thomas-Greenfield, said that African countries cannot remain neutral in the Ukraine conflict.

She said that when the UN General Assembly voted to condemn Russia’s invasion of Ukraine in early March, 17 African countries abstained while another eight did not vote at all.

Thomas-Greenfield was quoted by the BBC saying that there is no neutral ground and that the Russia-Ukraine was not just about the Cold War between the West and Russia.

To bait African nations, Thomas-Greenfield said the United States was working with other countries to identify alternatives to Russian imports.

Russia’s fears about Nato’s growth are at the heart of the problem, according to the leaders of South Africa and Uganda, two nations that voted against Nato’s expansion.

The UN vote for the resolution condemns Russia’s invasion of Ukraine as a violation of UN charter signalled division among African countries. Only Eritrea voted against the resolution. Nearly half of those that abstained were African nations.

The United States, one of the major economic and development partners of Africa and its western allies vehemently opposed the Russian invasion and imposed some of the toughest economic sanctions on Moscow. The Russian Federation is one of Africa’s trade partners that is involved in various areas of cooperation including defence.

The International Monetary Fund (IMF) has said that as a consequence, the war in Ukraine will be worsening external financing conditions that may spur capital outflows and add to growth headwinds for countries with elevated debt levels and large financing needs. The rising prices of ‘Wheat’ in some countries is another impact of Russia’s invasion of Ukraine in Africa.

Now some observers are saying many African countries are seeing Russia’s invasion of Ukraine as a proxy war between Russia and the West. In an interview with NPR, an American radio, Aanu Adeoye, a scholar at Chatham House, a think tank, that studies Russia-Africa relations said many African leaders have decided that it would be in their best interest to stay neutral in this fight.

The scholar added that since 2014 Russia has tried to be more influential on the continent.

“I think that means it has quite a number of countries on the African continent that consider Russia to be a good friend and a good ally,” Adeoye explained in the interview.

Several regional integration blocks in Africa such as the East African Community (EAC) and the Economic Community for West African States (ECOWAS) have stated their stand on the war in Ukraine calling for a peaceful resolution of the conflicts.

However, the African Union (AU) urged Vladimir Putin to end the conflict. In a statement on the situation in Ukraine from the chair of the African Union, Senegal’s President Macky Sall and Chairperson of the AU Commission Moussa Faki Mahamati expressed their concerns about the “very serious and dangerous situation created” in Ukraine.

AU leaders called on the Russian Federation and other regional or international actors to imperatively respect international law, the territorial integrity and the national sovereignty of Ukraine.

“The Chair of the African Union and the Chairperson of the African Union Commission urge the two Parties to establish an immediate ceasefire and to open political negotiations without delay, under the auspices of the United Nations, in order to preserve the world from the consequences of planetary conflict, and in the interests of peace and stability in international relations in service of all the peoples of the world.”

Few African nations have expressed themselves on Ukraine’s crisis, leading to what some have qualified as a neutral position on the Russia-Ukraine war in which US and its allies oppose Russia. Adeoye further told the American radio that to an extent the recent vote on the UN resolution that deplores the invasion of Ukraine is related to the Soviet era.

“I think some of this also goes back to the Soviet era. If we look at the voting patterns at the UN of the 17 countries that abstained, a few countries in southern Africa received quite a lot of support from the Soviet Union during their fight against colonial and imperial rule,” stated the scholar from Chatam House.

While many African nations have preferred non-alignment in the Russia-Ukraine conflict, in recent years Russia has been increasing its influence in Africa through cooperation in various areas.

“[Non-alignment] has been the default posture for many African countries over the years where they prefer not to get involved or not to get in between great power rivalries,” Joseph Siegle, the director of research for the Africa Center for Strategic Studies was quoted by the Voice of America as saying.

“And so, it isn’t a vote of support for Russia, but a vote for trying to maintain neutrality.”

US Secretary of State Antony Blinken told reporters after the vote that the invasion was a threat to Europe. Blinked noted: “As 141 member states of the United Nations know, more is at stake even than the conflict in Ukraine itself. This is a threat to the security of Europe and the entire rules-based order.”

Russia has invested in Africa through various business dealings. Senegal, signed a US$300 million deal with Russian oil company Lukoil last year. The company also has operations in Cameroon, Egypt, Ghana and Nigeria. Russian mining companies are also operating across Africa, extracting diamonds in Angola, aluminium in Guinea, and uranium in Namibia.

However, according to media reports, Moscow is Africa’s leading supplier of weapons. Since 2015, it is reported to have signed military agreements with more than 20 African countries.

The Russia-Africa summit is one of the major meetings between African leaders and their superpower partners. The first summit took place in Sochi in October 2019. The second is expected this year and will likely be affected by recent events in Ukraine.

According to the 2019 summit declaration, heads of states, regional economic integration, and the Russian Federation agreed to establish a mechanism for dialogued partnership, political, security, trade, and economic and legal cooperation among other areas of interest.

Since the war broke out in Ukraine, few governments on the continent have spoken out about the situation.

Thomas-Greenfield told the UN assembly that Russia was poised to intensify the brutality of its offensive urging members to hold Moscow accountable for its violations of international law.

As the US and its allies continue to fight Russia using mainly economic sanctions, it looks like Africa, a continent both the US and Russia see as a strategic partner will continue to balance its geopolitical interests and, in some cases, stay neutral.

However, a US ally European Union Delegation in Sudan quickly reacted and criticized what appeared to be Uganda’s sympathy towards the Russian Federation, after president Museveni’s son Lieutenant General Muhoozi Kainerugaba, commander of land forces and Museveni’s advisor expressed support to Kremlin via Twitter.

Kainerugaba claimed “the majority of mankind (that are non-white) support Russia’s stand in Ukraine”. He added, “Putin is absolutely right!”

On this, the West has it squarely in its hands to deal with the war that has reminded Africans where they belong when it comes to racial biases.