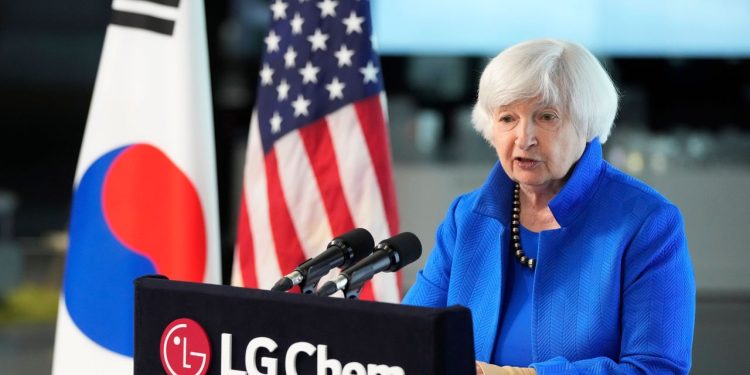 Treasury Secretary Janet Yellen, speaking in Seoul on Tuesday, urged a shift away from trade with geopolitical rivals. PHOTO/ASSOCIATED PRESS

Balance of power is shifting globally, fueled by the corona pandemic and the Russia-Ukraine war, pre-existing trade wars between super powers China and US have only worsened; where does this shift of power and political rift leave Africa.

All the fighting is not good for business, unless of course your business is in military contracts. So many nations are, and understandably so, avoiding conflict regions and diverting their supply chains to friendly countries.

This shift in mode of doing business and the related trade channels has earned itself a title, pundits are calling it friend-shoring. It refers to a situation where friendly countries are forming trade alliances allowing for trade to take place along new routes and in so doing, reshaping the global economy.

The question is, can Africa keep pace?

To answer that question is to be able to come to terms with the fact that African economists and politicians, for in this case one cannot do without the other, are up to the challenge. Despite been one of the youngest free economies in the World, Africa has awoken to find itself neck deep in geopolitics.

With all the value chain reorientation, so to speak, Africa must keep up because come what may, the continent still holds some of the World’s most sought after raw materials and precious metals and stones.

On which shores will Africa seek solace or can the resource rich continent remain bipartisan until it all washes over and a new World order is in place? And of so, what will be Africa’s position then?

Who will Africa side with as World power shifts?

It is the US that coined the friend-shoring terminology and also adopted it as a policy after it was proposed by Treasury Secretary Janet Yellen earlier this year. According to her, by choosing your ‘friends’ wisely, one can secure market and assured safe trade.

On the other hand, friend shoring further mitigates risks for the related parties To put it in her own Words, friend-shoring ‘insulates all parties concerned.’

“In so doing, we can help to insulate both American and Korean households from the price increases and disruptions caused by geopolitical and economic risks,” she said.

Seconding the concept, US Vice President Kamala Harris told an audience in Tokyo that by so partnering, it will serve not only to secure all parties concerned but also allow room to grow.

None has sold the concept further and with more zest than US president US President Joe Biden himself. Again with the focus been in Asia, president Biden placed friend-shoring front and center of his proposed Indo-Pacific Economic Framework.

The US-China trade wars were only exacerbated by the pandemic and it only makes sense that the US is rallying up other Asian nations to be its allies. If President Biden’s Indo-Pacific Economic Framework does materialize, it does in effect give the US because access to a market that contributes nearly half (40%) of the entire World’s GDP.

The deal aligns the US on a ‘friendly shore’ with the likes of Australia, India, Japan, South Korea, New Zealand and several Southeast Asian countries.

We have seen how the US is seeking ‘friends’ in Asia to secure its economic interests now lets look at what is brewing in Europe. According to European Central Bank President Christine Lagarde, nearly half of companies had diversified their supplier base by the end of 2021. As the world’s largest single market, the EU is able to use its strong regional base to diversify supply chains within the bloc.

Can Africa secure a friend-shoring commitment with US?

Worth noting is the fact that while in the Indo-Pacific Economic Framework, the US sets some clear commitments, it does not share same enthusiasm in its African version of the framework.

In its new ‘US strategy towards Sub-Saharan Africa’ that was unveiled in August 2022, the US dances around friend-shoring commitments but instead only attempts to ward off Chinese and Russian influences on the continent.

Lets look at some concrete examples, in its friend-shoring deal with Asian and Indo-pacific friends Indonesia, Malaysia, Vietnam and a host of other Indo-Pacific countries, the US commits to increase trade, bolster production plants and increase jobs and investments.

As for the African deal, not only are there no new commitments, it actually seems like even old commitments maybe done away with all together. For example, there is the Aid for Trade initiative for Africa that was extended by the World Trade Organisation (WTO) since 2005 to help cut trade costs and enhance competitiveness but now that initiative is shaking at the knees.

When they met in July 2022, the Aid for Trade leaders wished to put forth for Africa a pandemic recovery and long-term sustainable development plan for Africa. They proposed support for select development priority areas like trade facilitation, digital connectivity, export diversification and expansion of value chains, but not so the US friend-shoring deal for Sub-sahara Africa.

Can Africa put its foot down and look out for its own interests or is Africa only at the receiving end, no say, no sway? Young free economies or not, Africa must stand up for its own needs and lobby its own ‘friend-shoring’ deal that looks out for its own long term sustainability.

That been said, it is not a suggestion for Africa to align with adversaries of the US per say, but rather, it is only a suggestion or a wake up call for the World’s largest single market to speak up for its own interest and even demand of the US similar commitments that the Asian countries have got in their friend-shoring deals.

The same goes for the EU and Asia for that matter, Africa must demand better deals with clear commitments and long term contracts that will see the continent move from a raw material haven to a producer and manufacturer, especially with its own huge intra-country trade potential.