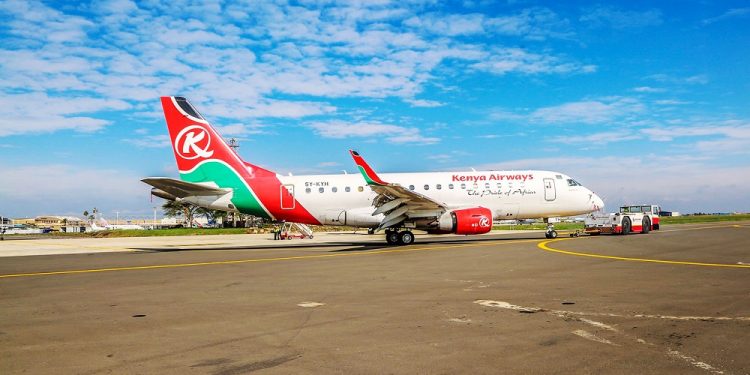 A Kenya Airways plane. A battle for African skies is brewing as competition becomes tougher for darling and established airlines. [Photo/ KAA]

African countries remain inaccessible to the majority of Africans due to the expensive air travel occasioned by few airlines.

To address this challenge, many budget airlines are coming up to fill the gap that premier airlines have not been able to fill.

The latest entrant is the start-up Green Africa Airways which has signed the largest yet aircraft agreement from Africa with American airplane manufacturer Boeing.

While the deal signing has gone smoothly, surviving the African skies is not guaranteed. This is going by the nature of the airline business on the continent and the challenges that remain a hurdle, with cross border travelling.

Africa’s top ten airlines are graded based on a customer satisfaction survey according to Skytrax which conducts the exercise every year. And from this, they get the World Airline Awards.

As Africa advances in development, there is a growing need for fast, comfortable and reliable transportation making flying the best option.

Flying is major catalyst to the continent’s growth and connectivity and the best airlines will definitely win becoming the darling of many if they can deliver reliability to commuters.

Among those angling for the pie include those voted the best airlines in Africa in 2018. Among them is Ethiopian Airlines which topped the list.

The airline from Africa’s second most populous nation is ambitious and flies to 125 Passengerdestinations and 44 for cargo.

The airline is a Star Alliance member with ASKY Airlines, Eritrean Airlines, Tchadia Airlines and Malawian Airlines as subsidiaries.

Air Mauritius is Mauritius’ flag carrier airline and the fourth largest carrier in Sub-Saharan Africa. Its markets are European, African and the Indian Ocean region with a fleet size of 15 and 24 destinations.

Another airline that could transform travel in Africa is Air Seychelles which is 40 per cent owned by the United Arab Emirates carrier Etihad Airways.

Kenya’s national carrier Kenya Airways has just been given tentative approval by the Federal Aviation Administration to fly to the John F. Kennedy International Airport in New York starting from October 2018.

Depending on the aircraft and the class travelled, different in-flight entertainment is available.

KQ plans to add up to twenty new destinations in Africa, Europe and Asia in the next five years.

The third biggest Sub-Saharan Africa’s carrier will see five sub-leased aircraft re-join the fleet by the end of 2019 to facilitate the expansion move.

The Royal Air Maroc which is fully owned by the Moroccan government operates from the Mohammed V International Airport to serve the local market in Morocco and with scheduled international flights in Africa, Asia, Europe, North and South America.

The airline also offers charter flights including for the Hajj services.

Fastjet which aims to become the continent’s first low-cost, pan-African airline is placed eight after Mango in Africa. It came to be after the acquisition of Fly540, an airline operating in East Africa.

The British/South African-based company started flights in Fastjet’s own name in November 2012 in Tanzania.

To provide low-cost air travel, passengers can buy beverages and snacks on all flights. The full in-flight menu can and does vary across the different routes.

It is as simple as that!

It operates an all-Boeing domestically and medium-haul services in Africa. The airline also offers long-haul services to Brazil, Cuba, China and Portugal.

The airline is an International Air Transport Association (IATA) and the African Airlines Association member.

While this list is not exhaustive, there are many other airlines that are serving in the different African countries and which look to be within the big league some time.

It is however not guaranteed that they will make it unless they can evolve with the times and offer what the rest are not offering.

Why KATCA warned Kenyans against flying the Nairobi – Addis route