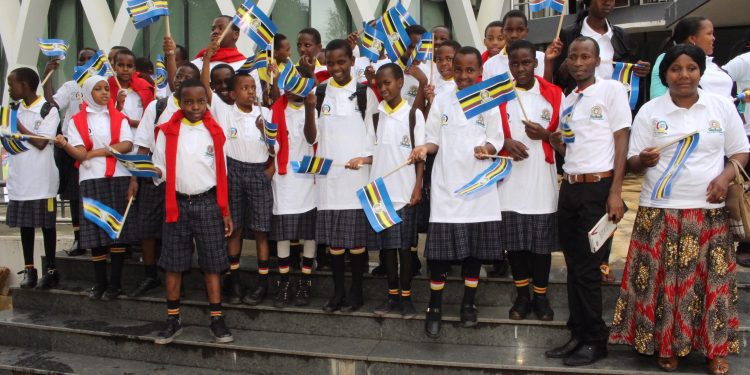 Students who participated in the event carrying EAC paper flags outside the EAC Headquarters before the procession through Arusha city.

by Kimani Chege
in East Africa, Tanzania
0
Share on FacebookShare on LinkedIn

The East African Community has marked its 20th Anniversary with pomp and fanfare at its Headquarters in Arusha, Tanzania.

This comes as the community mulls over the inclusion of The Democratic Republic of Congo into the community, which would not only give the community a major population rise but also a coast to coast linking both the East African coast and the West African coast. Though the considerations are yet to be approved, policy analysts believe this move is a matter of when not if. However, there is still contention on whether to include the East most country, Somalia which has also expressed interest.

Uganda’s 2nd Deputy Prime Minister and Minister for EAC Affairs, Hon. Dr. Ali Kirunda Kivejinja, who presided over the anniversary celebration, said that EAC Partner States would not repeat the mistake of the past that led to the collapse of the first Community.

Dr. Kivejinja said that the cost of the collapse of the first EAC was monumental in terms of the loss of jobs, incomes and other benefits to East Africans. Dr. Kivejinja said that the Treaty for the Establishment of the EAC was the bible of the Community which should guide all matters around the integration process and warned against politicising issues that could be settled amicably by the Partner States. He urged all EAC Staff to take their work seriously, adding that it was a privilege to serve the entire region in their various capacities.

The Deputy Prime Minister said that East Africans have a common history, ancestry and were the descendants of the first human being describing East Africa as the cradleland of all mankind. He observed that East Africa, and by extension Africa, had all the necessary human and material resources to create the society it wants.

In his remarks, EAC Secretary General Amb. Liberat Mfumukeko disclosed that a regional campaign comprising several activities was being carried out to highlight key milestones as part of celebrations of the Community’s 20th Anniversary.

Amb. Mfumukeko noted that the region had made tremendous achievements through various policy initiatives including new infrastructure, regional industrialization policies, healthcare programs, a common external tariff and a Common Higher Education Area, adding that there was still room to do more as most East Africans were yet to reap the benefits of the integration.

“Today we recognize and affirm that each one of us deserves better; this is our call for action for all stakeholders to pull together so that the Community can deliver the dreams of our citizens,” said the SG.

Read also: 13 proposals to EAC on how to ease doing business across borders

He said that the Community in collaboration with KfW, the German Development Bank, and the Inter-University Council of East Africa had unveiled a student exchange program providing fully sponsored postgraduate scholarships to 60 EAC students tenable at various universities in the Partner States during the current academic year.

The celebrations included a procession through the City of Arusha led by the brass band from the Monduli Military Academy.

With a land area of 2.5 million square kilometers and a combined Gross Domestic Product of US$ 193 billion, its realization bears great strategic and geopolitical significance and prospects for the renewed and reinvigorated EAC.

The current funding for various social and infrastructural projects reaching US$3 Billion. Most of these funds have gone into inter-states projects as well as projects within a state having a regional impact.

The process towards an East African Federation is being fast-tracked, underscoring the serious determination of the East African leaders and citizens to construct a powerful and sustainable East African economic and political bloc.

If this process was reached in time, the East African community having enrolled DR Congo and Somalia would be the largest country in Africa, with the highest population and a GDP that can compete with some of the west European countries.