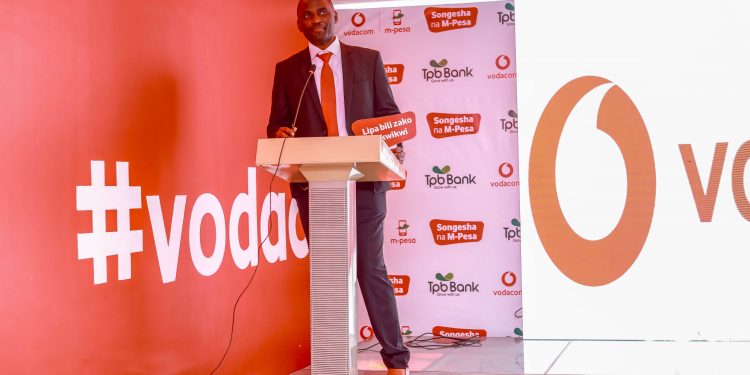 This innovative solution dubbed Songesha was launched in partnership with TPB bank at an event at the company’s headquarter.

Vodacom, has unveiled a first in the market mobile money service that allows M-PESA customers to complete their M-PESA transactions when they have insufficient funds in their M-PESA accounts.

This innovative solution dubbed Songesha was launched in partnership with TPB bank at an event at the company’s headquarter.

In January this year, Safaricom launched a feature on M-Pesa dubbed Fuliza that allows users access an overdraft facility and it has since garnered millions of users in Kenya.

With the introduction of the overdraft service, M-Pesa customers can now use M-Pesa with ease and confidence because they have instant access to credit to enables them to make money transfers, remit bills, purchase from merchants or when they have insufficient funds in their accounts.

According to a statement from Vodacom, the Director of M-Commerce, Epimack Mbeteni said, “Our desire to spur innovative mobile finance led us to keenly take note of our customers’ repeated transactional hurdles due to shortage of funds in their wallets which inspired us to respond with an innovative solution – an overdraft facility that enables the customer to complete M-Pesa transactions that would have otherwise failed or postponed due to shortage of funds,”

M-commerce innovations rolled out this year

Songesha is one amongst other M-commerce innovations rolled out this year which have enabled Vodacom to maintain market leadership in mobile and financial services in transaction volumes, market share and subscribers. In the year that ended March 31st this year, M-Pesa increased their market share by 40 per cent and advanced financial inclusion to over 9 million M-Pesa users who transact more than 4.1 trillion a month.

M-Pesa users can access Songesha by dialling the M-Pesa menu, *150*00#, select Financial service then Songesha and opt-in to the service. Once a customer signs up for Songesha, an overdraft will be automatically applied up on customers consent in the case where they do not have enough funds in their wallet to complete a transaction. The borrowed amount will be automatically reimbursed upon customer’s deposit or receipt of funds in their M-Pesa Wallets.

“The overdraft  attracts an interest of 1 per cent per day with a facility term of up to 18 days and users can make one request at a time, as long as it is within their overdraw limit, which will be dependent on their M-Pesa transaction score. We have partnered with TPB bank to make overdraft possible. In order to determine your overdraft limit, the bank will use algorithms based on M-Pesa transactions,” said Epimack.

Speaking on the service Mr Moses Manyatta the  Acting TPB CEO from TPB bank said  “Our focus as a bank is promoting financial inclusion and empowering Tanzanians by helping them develop a saving culture and access to credit which is what Songesha is all about; 24/7 access to credit via your phone!. We are very proud of this partnership and optimistic about the revolution this will bring in digital finance, “ he said.

“Vodacom remains committed to transforming Tanzania into a cashless society, we are investing in mobile technology that will advance more people into financial systems, give our customers peace of mind and ultimately, achieve the country’s envisioned socio-economic goals.” summed up Mbeteni.

Ethiopia to rake in from the AHIF conference

Kenya's Savannah Cement to venture into other East African countries