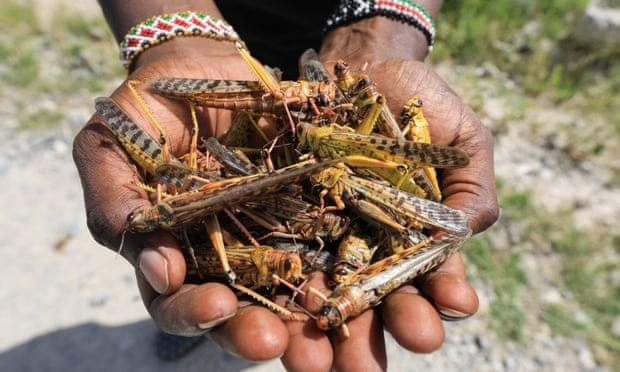 Why locust invasion poses a threat to East Africa’s livelihood

According to Food and Agriculture Organization (FAO) locust update the situation in East Africa remain critical, as millions of people could suffer from food insecurity

Locusts could be East Africa’s new threat, after the coronavirus pandemic, which is also taking a toll in East Africa. The Locust infestation is causing chaos to the human food supply and has been wreaking havoc for the past decades, in the African continent.

The situation in some parts of East Africa is alarming, according to 27 May Locust Watch information from the Food and Agriculture Organization (FAO), the desert locust upsurge remains critical in East Africa.

“The current situation remains extremely alarming in East Africa where Kenya, Ethiopia and Somalia continue to face an unprecedented threat to food security and livelihoods. New swarms from current breeding will form from mid-June onwards, coinciding with the start of the harvest,” FAO argued.

According to a March 10, 2020, BBC News report, the locusts—which eat their body weight in food every day are breeding so fast numbers could grow four hundredfold by June, hence—with the unprecedented pressure and complexities waged by COVID-19, the region is somewhat faced with a handful threat.

In the same context, BBC News reported that in January the United Nations appealed for $ 76 million to fight the crisis, thus—the figure nearly doubled to $138 million by March 10.

“Thereafter, there is a risk that swarms will migrate to the summer breeding areas along both sides of the Indo-Pakistan border as well as to Sudan and perhaps West Africa,” the locust update read in part.

According to the locust update, the current situation remains extremely alarming in East Africa where Kenya, Ethiopia, and Somalia continue to face an unprecedented threat to food security and livelihoods.

New swarms from current breeding will form from mid-June onwards, coinciding with the start of the harvest. Thereafter, there is a risk that swarms will migrate to the summer breeding areas along both sides of the Indo-Pakistan border as well as to Sudan and perhaps West Africa.

The update noted that in Kenya, ground and aerial control operations continue against hopper bands in the northwest (Turkana, Marsabit). A few late-maturing swarms were seen south of Lodwar and new infestations were found along the Tana River where hopper bands are present.

While in Ethiopia, the update stressed that few immature and mature swarms remain in the south. Breeding has increased in the Ogaden and hopper bands have present. Breeding continues near Dire Dawa where hopper bands persist, and adults have formed groups and swarms. Breeding also occurred in Afar and on the eastern edge of the highlands, causing hopper bands to form. Ground and aerial control operations continue.

Somalia has another scenario,  whereby breeding is underway in central areas (Galkayo and Galmudug) where scattered adults and hopper groups are present. Breeding is also underway in the northwest where hopper bands and groups of immature and mature adults are present on the plateau (east of Burao to the west of Boroma) and the coast near Bulhar. Hopper groups are also present in the northeast near Garowe. Control operations are underway.

On the 26 May, at least one swarm was seen in the northeast district of Kaaborg in Uganda that was probably moving towards South Sudan.

Further in Sudan scattered gregarious adults are present near the South Sudan border at a few places in Blue Nile, While Nile, and South Kordofan states. A few adults persist in the Nile Valley north of Kordofan.

East Africa’s vibrant and largest economy—Kenya was handed a 10 weeks head start by FAO warning and they took the necessary initiatives to contain the biblical danger, but Keith Cressman, Senior Locust Forecasting Expert at FAO said “But the magnitude of the problem has overwhelmed national capacity. It was just waves and waves of invasion,”

Rolling down the memory lane, it cost $450m to stop a desert locust plague that hit Africa between 2003 and 2005, causing $2.5bn of crop damage, According to the New economy, a paper published in the Journal of Orthoptera Research.

However, placing another scenario to the table, FAO argues that locusts wiped out more than 175,000 acres of farmland in Somalia and Ethiopia by the end of December. This means the sheer size of the swarms in Kenya and Ethiopia give rise to great concern over even larger swarms during harvest season.

While, on the other side—one square kilometre swarm can contain about 40 million locusts, which eat about the same amount of food in one day as 35,000 people. An average swarm can destroy crops sufficient to feed 2,500 people for a year. Sometimes as many as 80 million locusts crowd into each square kilometre of the swarm, and they can travel more than 90 miles in a day.

Further, In one day, a swarm can consume 200 tonnes of vegetation. Once they’ve exhausted the resources of one region, they march relentlessly onto the next. They’re capable of covering hundreds of kilometres per day and have been known to travel across entire oceans. As well as threatening food security, this destruction can cripple already vulnerable economies.

As operations get limited by COVID-19, straining the supply of food over time and space within the region, becomes an unnecessary heap of trouble, as millions of lives are at stake.

According to FAO, Ethiopia and Somalia had not seen such severe desert locust outbreaks in more than 25 years, Uganda in 60 years, and Kenya in 70 years.

While, the lack of infrastructure to address the locust invasion is deepened by COVID-19 restrictions, which can slow the air and ground spraying of pesticides and disrupt the supply chains of the necessary products needed to prevent these pests from wiping outcrops across the region.

“After the eggs hatch in May, we anticipate new swarms will form in June and July, which will coincide with the start of the harvest season. This could not be worse timing,” says Mercy Corps’ Regional Director for Africa, Sean Granville-Ro

According to a report by Relief Web—largest global humanitarian information source, various stakeholders have waged war against the infestation working alongside national tasks force.

“Connecting with local and country-level governments, locust-centred task forces and other partners, Mercy Corps teams are increasingly working to mirror the response to the locusts to COVID-19, responding to urgent needs such as food and cash, and looking to build preparedness and resilience against future invasions with information outreach and surveillance systems, and strengthening markets and livelihood,”

The report showcased a series of events complementing current efforts, whereby a great example of such partnerships already in motion includes an effort led by a Mercy Corps Agrifin Program working with local partners to develop digitally-enabled solutions for smallholder farmers in five African countries.

In Kenya, the agriculture organization coordinated with a host of partners to develop an SMS line and a WhatsApp line for farmers in need of timely information.

“Using a new line, farmers can easily report desert locusts in their areas and access up-to-date information. This line was advertised earlier this month via a new TV series that offers desert locust mapping and advisory content and reaches six million farmer households,”

The locust fighting landscape has been working hard to contain the situation, as BBC News (March 10, 2020) reported that, aerial and ground spraying combined with constant tracking of the swarms are viewed as the most effective strategies.

Hence, Stephen noted that Ethiopia was using five and Kenya six for spraying and four for surveying.

As the infestation brings a combined threat to the region, it is imperative for the region to co-design and co-work in handling the spread of the deadly pests.