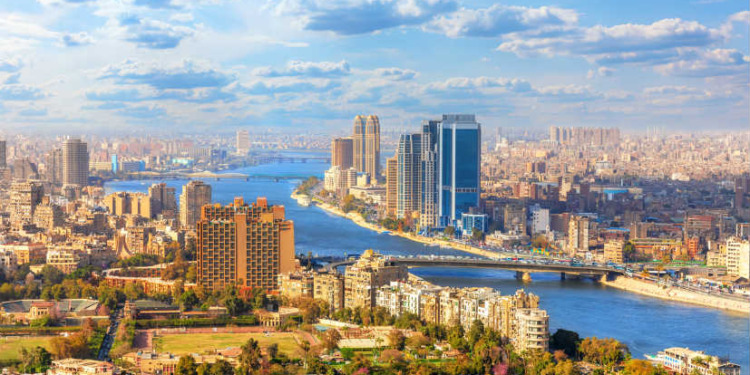 The cooperation is directed towards the execution of several development projects across various sectors such as education, electricity, technical education, health and agriculture.

According to a press statement from the ministry, the cooperation is directed towards the execution of several development projects across various sectors such as education, electricity, technical education, health and agriculture.

Egypt has carried out over 1,100 training programs with China over a period of four years which has benefited over 4,000 government officials. This is in addition to 25 training programs in high priority fields which benefited government units in the fields of health, water resources, population and agriculture.

Egypt’s Minister of International Cooperation Rania Al-Mashat said that the ministry is keen on enhancing the exchange of knowledge, technical assistance and expertise within the framework of its international partnerships with multilateral and bilateral development partners while supporting the country’s vision in building human capacity.

The ministry is working towards advancing economic cooperation with bilateral and multilateral development partners through the three principles of Economic Diplomacy: Multi-Stakeholders Platform, the Official Development Assistance (ODA) mapping to the Sustainable Development Goals (SDGs), and the Global Partnerships Narrative that puts “People at Core” through “Projects in Action,” with “Purpose as the Driver”. 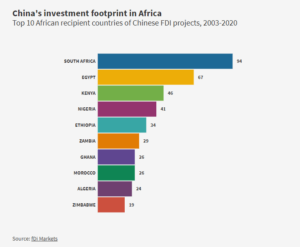 In order to provide technical assistance for the country’s ongoing projects, the ministry aims to promote the mutual exchange of expertise and knowledge, international partnerships and provide the necessary training programs for government units to achieve the desired, effective results.

Al-Mashat noted that in order to mitigate the challenges and socio-economic due to the pandemic, the world needs solidarity and multilateral cooperation. According to the minister, this will accelerate the pace of implementing the United Nations’ Sustainable Development Goals (SDGs) during this period country’s are facing challenges in achieving development.

In 2013, China overtook the US as Africa’s largest equity investor through Foreign Direct Investment (FDI). Other players like Europe declined from 44 per cent to 34 percent, while the presence of US contractors fell from 24 percent to just 6.7 percent.

Over the last two decades, China has emerged as Africa’s largest bilateral lender, committing $153 billion to over 1,140 projects in Africa, in power and transportation sectors, where Africa has the greatest deficits, accounting for about 55 percent.

China is the central player in many of Africa’s biggest ticket infrastructure projects which are being developed through Chinese partnerships— including the $4.5 billion Addis Ababa–Djibouti Railway, the $12 billion Coastal Railway in Nigeria and the $11 billion megaport and an economic zone at Bagamoyo .

In 2019, Africa’s top recipients of Chinese FDI was Ethiopia, South Africa, the Democratic Republic of Congo (DRC), Angola and Mauritius.

China’s trade with Africa has multiplied by 20 since the 2000s surpassing $200 billion in 2019 and its FDI into Africa has multiplied recording $49.1 billion in 2019. In 2019, China’s FDI in Africa totalled $110 billion, contributing to over 20 percent of Africa’s economic growth. African supply has been scaled up by Chinese FDIs to satisfy the rising middle-class demand.

Currently, over 10,000 Chinese-owned firms are currently operating throughout Africa, and the value of Chinese business in Africa since 2005 amounts to more than $2 trillion according to McKinsey. 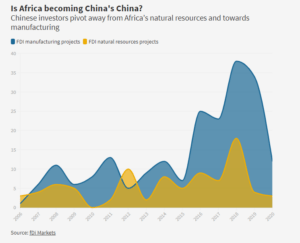 In the past few years, the continent has experienced a decline in FDI’s inflows. The decline is due to the uncertainty of the Chinese trade war with the US, changes in the Chinese economy and Chinese investment losses in Venezuela and in other regions.

In 2019, FDI inflows in North Africa decreased by 11 percent to $14 billion with reduced inflows in all other countries in the region apart from Egypt which remained the highest FDI recipient in 2019 with an inflow of $9 billion which was an increase by 11 percent.

In Sub-Saharan Africa, FDI inflows decreased by 10 percent in 2019 to $32 billion after a significant increase in 2018.

Southern Africa on the other hand was the only region that received higher inflows which increased by 22 percent to record $4.4 billion due to the slowdown in net divestment from Angola

In South Africa, FDI inflows decreased by 15 percent to $4.6 billion despite key investments in mining, services (banking and finance) and manufacturing (consumer goods and automobiles).