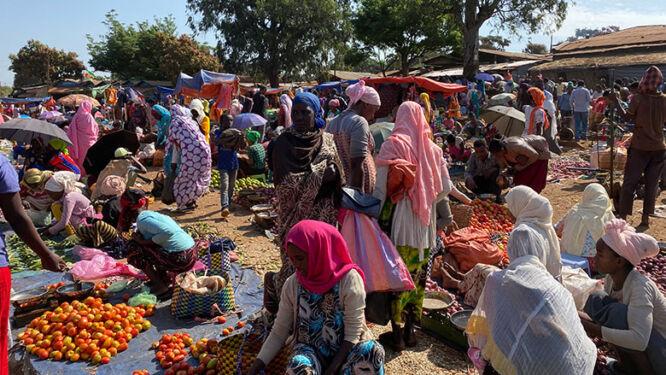 In 2021 the Ethiopia’s current account is likely to deteriorate before improving in 2022 as exports in service gradually pick up.

Ethiopia’s Gross Domestic Product (GDP) is expected to fall to two per cent in 2021 and recover to eight per cent in 2022 as industry and service sectors rebound according to a report by African Development Bank (AFDB).

The country’s fiscal deficit is projected to rise due to delay in tax policy reforms which have been affected by the pandemic while its increased use of open market operations is expected to gradually reduce inflation.

The report dubbed ‘Ethiopia Economic Outlook’ noted that in 2021 the country’s current account is likely to deteriorate before improving in 2022 as exports in service gradually pick up. The report also noted that the key risks to Ethiopia’s economic outlook include climate change, weaknesses in global growth and low investor confidence partly due to sporadic domestic conflict.

“Ethiopia’s financing requirements are significant given its large physical and social infrastructure needs and low tax-to-GDP ratio, which averaged 10 per cent from 2017 to 2020. The primary deficit plus debt service was estimated at nearly 4 per cent of GDP. As of June 2020, total public debt was about 57 per cent of GDP, slightly more than half of which was external.” The report read in part.

In 2020 gross reserves amounted to $3.1 billion which the reports said is like 2.5 months of imports and are not likely to provide a short term alternative source of development financing.

With Ethiopia expected to receive $1 billion in Eurobond in December 2024, expanding public debt in the context of large public expenditure requirements can limit the fiscal space which will lead to repayments risks. To address this challenge, the country will need to work on reforms in public finance and investments management so as to improve the efficiency of public expenditures, the report explained.

In 2020 Ethiopia’s economy grew by 6.1 per cent a decrease from 8.4 per cent in 2019 due to the effects of the pandemic. Sectors such as transport, communication and hospitality were adversely affected by the covid-19 pandemic and the measures put in place to curb the spread of the virus. The industry and service sectors led to the growth in the economy.

Due to disruptions in the supply chain and expansionary monetary policy by the pandemic, inflation in 2020 reached 20.6 per cent above the 8 per cent target. Exports in the service sector decreased by 6 per cent which was mostly because of low revenue from Ethiopian airlines. As exports of gold, flowers and coffee increased the country’s total exports rose by 12 per cent in 2020 while its imports decreased by 8.1 per cent.

Ethiopia’s Foreign Direct Investments (FDI) declined by 20 per cent to 2.2 per cent while personal remittances fell by 10 per cent to 5.3 per cent of the total GDP. In 2016, poverty was projected to decrease from 23.5 per cent to 19 per cent in 2020 but as the pandemic cost many people their jobs, to as many as 2.5 million, poverty reduction is far fetched for now.

Also Read: Ethiopia’s emerging success: How an airline set pace for the global