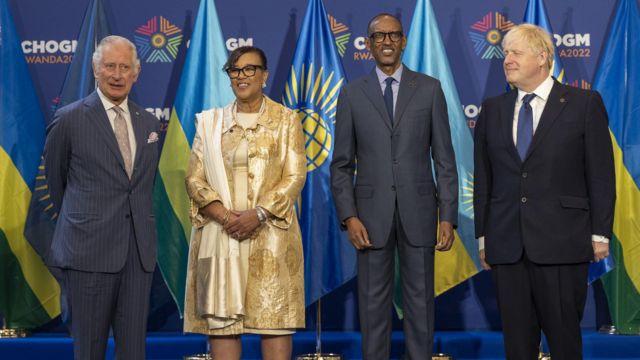 Trade between Commonwealth member states has been growing exponentially, with intra-commonwealth trade expected to surpass $700B in 2022 .The Commonwealth has been a part of the development of AfCFTA since inception, and has remained steadfast in its commitment to work with African countries, in strengthening and deepening their national and institutional capacity, together with developing trade policies over the years. How can member states leverage their commonwealth connections to collaborate and drive sustainable economic growth in Africa?

by june njoroge
in Countries
0
Share on FacebookShare on LinkedIn

The 2022 Commonwealth Heads of Government Meeting (CHOGM) took place in Kigali, hosted by the President of the Republic of Rwanda, Paul Kagame in late June.

In his remarks, President Kagame noted that the Commonwealth’s objective is to drive inclusive growth and a common future, such that no nation, particularly the small developing countries, is left behind.

Baroness Scotland highlighted that her ambition was to facilitate trade within countries. “At the heart of our mission is trade, the lifeblood of economic activity and the arteries of the economic relationships between our Commonwealth member countries. This is the true Commonwealth advantage.”

In light of this, she officially launched the Commonwealth Digital Trade Hackathon, at the youth forum session. This dynamic initiative aims to develop innovative solutions that increase the adoption of digital technology in the Commonwealth and beyond. Under the theme ‘Harnessing Technology to Transform the Digital Trade Economy”, proposed solutions will seek to reduce trade barriers through efficient digital infrastructure, to facilitate cross-border paperless trade. In addition, it will directly engage and challenge the youth to examine the existing barriers to digital trade, and develop software solutions to overcome them.

Trade between Commonwealth member states has been steadily growing exponentially. Kenya hosted the second Intra-Commonwealth SME Trade Summit (ICSA), which is a platform where businesses showcase their products and services. The Summit brought together high-level policymakers from ministries of trade and industry across the Commonwealth, to compare notes on their schemes for promoting international trade, strengthening SME’s and linking them to the global economy. In a keynote address at the Summit, SG Scotland noted that currently, the intra-Commonwealth trade amounts to almost 20 per cent of the total global trade of the Commonwealth, and there was immense potential for it to grow more.

Integrating AfCFTA under the Commonwealth Aegis

How can member states leverage their commonwealth connections to collaborate and drive sustainable economic growth in Africa?

The African Continental Free Trade Area (AfCFTA) albeit nascent is hailed as the world’s largest free trade agreement since the establishment of the World Trade Organization (WTO), and seeks to promote intra-African trade; by eliminating tariffs thereby creating a single market that facilitates free movement of goods, services and investment within the African continent. AfCFTA was ratified and came into force in January 2021, creating a new trade dynamic on the continent.

It continues to reshape markets and economies across the region.

According to a World Bank report named: ’The African Continental Free Trade Area: Economic and Distributional Effects; which is designed to guide policymakers in implementing policies that can maximize the agreement’s potential gains while minimizing risks. AfCFTA connects 1.3B people across 55 countries, with a combined GDP valued at US$3.4 trillion.

The Agreement at onset was projected to lift 30 million Africans out of extreme poverty and boost the incomes of nearly 68 million others who live on less than $5.50 a day; boost Africa’s income by $450B by 2035 whilst adding $76B to the income of the rest of the world; increase Africa’s exports by $560B mostly in manufacturing; spur larger wage gains for women and boost the wages for both skilled and unskilled workers. Full implementation of the AfCFTA will help African countries diversify their exports, accelerate growth and attract foreign direct investment.

In terms of poverty reduction, West Africa was projected to record the biggest decline by 12 million, Central Africa by 9.3 million, and Eastern Africa by 4.8 million and Southern Africa by 3.9 million. Tariff liberalization would solely boost the continent’s income by just 0.2 per cent. The report further indicates that by increasing regional trade, lowering trade costs and streamlining border procedures, full implementation of AfCFTA would aid African countries in increasing their resiliency in the face of future economic shocks and help usher in deep reforms that are necessary to enhance long-term growth.

The Commonwealth has remained steadfast in its commitment to work with African countries, strengthening and deepening their national and institutional capacity and developing trade policies over the years. It has been a part of the development of AfCFTA since inception, and had placed three long-term advisors at the AU, to support the development and negotiations of the continental trade agreement, up until implementation and hitherto in its second year of operations.

“Our latest data shows trade in goods alone has increased by about $40B since 2017. AfCFTA coming into force provides a promising opportunity for Commonwealth African members to grow their trade and investment.” Commonwealth’s Baroness Scotland highlighted during ICSA summit earlier this year.

The combined GDP of Commonwealth countries, with a total population of over 2.4B, is now around $13 trillion and is estimated to reach $19.5 trillion in 2027. “With intra-Commonwealth trade expected to surpass $700 billion in 2022, and Commonwealth countries comprising a number of free trade zones including the Africa Continental Free Trade Area (AfCFTA), the Commonwealth Business Forum, provided a valuable opportunity to capitalize on global opportunities, for economic growth and social development.” The CEO of Trust Stamp, Gareth Genner who was one of the key guests at the 2022 CHOGM Business Forum, observed.

Earlier in the year, during the AfCFTA’s Secretary General Wamkele Mene’s visit to London, the UK launched a programme to support the implementation of AfCFTA; where the Foreign Commonwealth and Development Office (FCDO), pledged to provide up to £35m to provide trade facilitation and trade policy support to the AfCFTA Secretariat and Member States, through Trademark East Africa (TMEA), Overseas Development Institute (ODI) and other regional partners.

AfCFTA is expected to lift 30 million people out of extreme poverty, create jobs and provide new commercial opportunities for businesses across Africa and the UK.

Consequently, this will drive industrialization and boost Africa’s economic growth, thereby delivering shared prosperity across the continent. In reiteration, the WTO Director-General Ngozi Okonjo-Iweala, in March this year, launched a new project with an aim to aid eight African countries in operationalizing AfCFTA. The project’s goal was to support the implementation of more than 30 activities in the AfCFTA strategies of Côte d’Ivoire, Guinea, Mauritania, Burkina Faso, Tunisia, Senegal, Nigeria and Togo.

AfCFTA, holds the promise of substantial tangible progress in the near future in pursuing economic stability for African countries. Businesses in Africa need to fully take advantage of the opportunities offered by AfCFTA, in terms of trade and investment. By tapping into the benefits of the AfCFTA-Commonwealth synergy, Africa will edge closer to its achievement of the Pan-African Vision, Agenda 2063 of ‘An integrated, prosperous and peaceful Africa.’

Read: Sectors to reap most from CHOGM 2022 summit