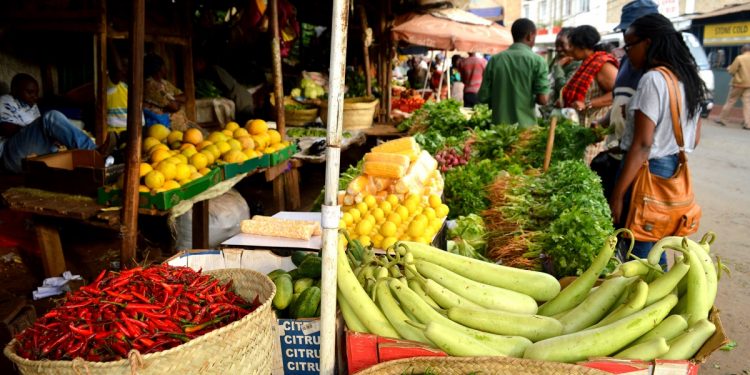 The Fig Tree Market in Ngara, Nairobi. A WFP projection shows that some 265 million people in low and middle-income countries will be in acute food insecurity by the end of 2020. [Photo/Foodies Kenya]

A WFP projection shows that some 265 million people in low and middle-income countries will be in acute food insecurity by the end of 2020. This is unless swift action is taken to ensure that food security is guaranteed.

Ironically, a majority of people who suffered acute food insecurity in 2019 were in countries affected by conflict at 77 million, climate change affected 34 million while economic crises hit 24 million people hard according to the Global Report on Food Crises.

In Africa, the Democratic Republic of the Congo, Ethiopia, South Sudan, the Sudan and Nigeria are among 10 countries globally that constituted the worst food crises in 2019.

These 10 countries accounted for 66 per cent of the total population in crisis or worse with a total of 88 million people in need.

WFP’s Senior Economist, Arif Husain says that the covid-19 coronavirus is potentially catastrophic for millions already hanging by a thread.

“It is a hammer blow for millions more who can only eat if they earn a wage. Lockdowns and global economic recession have already decimated their nest eggs. It only takes one more shock- like covid-19- to push them over the edge. We must collectively act now to mitigate the impact of this global catastrophe.”

While most income generators for the most at-need people have been hit hard, governments need to put in place measures that will ensure that their citizens are taken care of during the crisis. This will at least cushion the populace without means against the vagaries of the pandemic.

Undoing the gains in Sub-Saharan Africa

It is projected that the covid-19 pandemic will exact a heavy human toll in Sub-Saharan Africa with the economic crisis it has triggered upending recent development progress.

As a priority, the policy is to ramp up health capacity and spending to save lives and contain the virus outbreak with support from all development partners essential in addressing the financing needs including debt relief for the most vulnerable countries.

The Bretton Woods Institution says that fiscal, monetary, and financial policies should be used to protect vulnerable groups, mitigate economic losses, and support the recovery. On the bright side, the IMF notes that once the crisis subsides, fiscal positions should return to sustainable paths.

Due to the covid-19 coronavirus, the IMF projects the region’s economy is projected to contract by −1.6 per cent this year which is the worst reading on record. This is also a downward revision of 5.2 percentage points from the institution’s October 2019 forecast.

Countries which are less diversified economies will be hit the hardest, reflecting the impact of lower commodity prices and containment efforts.

Also, countries that depend on tourism are expected to witness a severe contraction because of extensive travel restrictions, while emerging market and frontier economies will face the consequences of large capital outflows and tightening financial conditions.

“Given the limited social safety net available, people will suffer. Moreover, the pandemic is reaching the shores of the continent at a time when budgetary space to absorb such shocks is limited in most countries, thus complicating the appropriate policy response,” notes the IMF’s April 2020 Sub-Saharan Africa Regional Economic Outlook.

Globally, financial conditions have tightened sharply in 2020 with investors having pulled out over US$90 billion from emerging markets since the beginning of the crisis, the largest capital outflow on record.

“Financial markets in sub-Saharan Africa have also come under pressure: sovereign spreads in the region have increased by about 700 basis points since February 2020, reaching all-time highs, with the largest rise seen in oil exporters while bond issuances have stopped, and large capital outflows have also been recorded from the region’s frontier and emerging markets.

For oil exporters like Nigeria, growth in oil is projected to decline from 1.8 per cent in 2019 to −2.8 per cent in 2020. This is a downward revision of 5.3 percentage points from the October 2019 regional economic outlook.

Nigeria which is the largest economy in the region will see its GDP contract by −3.4 per cent which is a reflection of the large drop in oil prices and the impact of containment and mitigation measures on economic activity.

The IMF notes that the covid-19 pandemic will have substantial economic effects on sub-Saharan Africa in addition to the rising humanitarian costs, large disruptions in production can be caused by workplace closures, disruption of supply chains, and reduction in labour supply because of sickness or death.

While lockdowns are having devastating effects like on food insecurity on vulnerable hand-to-mouth households with limited access to social safety nets, the loss of income, fear of contagion, loss of confidence, and heightened uncertainty all reduce demand.

In addition, the sharp tightening of global financial conditions reduces investment flows to the region and hampers its ability to finance spending needs to deal with the health crisis and support growth.

This may result in either a cut in government spending, a build-up in arrears, or an increase in government borrowing in local markets, with attendant consequences on domestic credit and growth.

For frontier economies, the sudden stop and capital outflows are exerting exchange rate pressures and can result in a large current account adjustment through domestic demand compression and further balance sheets pressures in countries with large foreign exchange mismatches.

Of immediate concern now is stopping the spread even though the pandemic could almost double the number of people suffering acute hunger. The numbers could hit more than 250 million vulnerable people globally by the end of 2020, according to the World Food Programme (WFP).

In this context, it is vital that the food assistance programme is maintained, including WFP’s own programmes which offer a lifeline to almost 100 million vulnerable people globally.