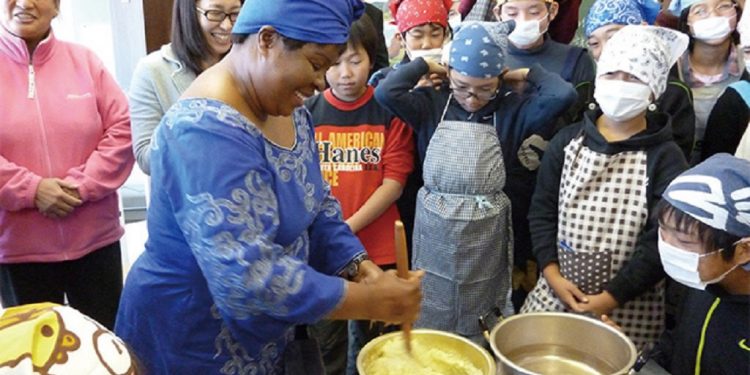 Elementary school students in Yokohama City learn about Malawian food as part of the “One School, One Country” project. Chinese presence in Africa has caught Japan’s eye following a JETRO survey carried out between September and October 2018. [Photo/JapanGov]

by Njenga Hakeenah
in Countries, Economic Growth, Industry and Trade
0
Share on FacebookShare on LinkedIn

Chinese companies have emerged as the top competitors in the African market for the first time in a JETRO survey carried out between September and October 2018.

The Japan External Trade Organization (JETRO) conducted its latest survey on business operations of Japanese-affiliated firms in 24 countries in Africa with the aim of capturing opportunities and contributing to discussions at TICAD 7.

Slated for August 28 to 30, 2019, the 7th Tokyo International Conference on African Development (TICAD 7) will be held in Yokohama to address the matters arising from the survey as Japan seeks to expand its footprint on the continent.

The survey covered 392 companies which included 81 manufacturers and 229 non-manufacturers with a response rate of 79.1 per cent.

Focus on new industries in Africa

From the results, the survey found that there is a noticeable shift from natural resources and official development assistance (ODA) to business targeting private-sector demand.

With this, attention to new industries is also increasing.

Form the survey, operating profit forecast and future business outlook shows that approximately half of the companies maintained profitability with approximately 60 per cent of them considering business expansion.

About 60 per cent of companies in South Africa, Zambia and Egypt are in the black. Egypt recorded the highest surplus of 58.8 per cent in the past five years due to financial improvement in the country.

On the other hand, the proportion of surpluses remained sluggish at between 25 to 34.4 per cent in Kenya, although it increased from the previous year.

Morocco saw a significant drop from the previous year from 61.1 per cent to 45.5 per cent.

The trend toward business expansion continues with the percentage of companies responding they would “expand business in the future” exceeding the majority for the past five consecutive years.

By country, the proportion in Mozambique, where rapid growth is expected in natural gas development, was over 70 per cent, and in Morocco, which focuses on attracting companies in free zone development, it was over 60 per cent.

Among the reasons for entry to Africa, there was an increase in answers of “growth potential” and “market scale” in what is believed to be a pursuit of private consumption demand.

In comparison with the survey in 2007, the ratios for “natural resources” and “ODA from Japan” were down significantly. More than 90 per cent of companies in Nigeria and Egypt answered that “market size and growth potential” is attractive.

Among promising fields in the future, infrastructure, the service industry, the consumer market and new industries ranked among the top, exceeding natural resources and transportation equipment (motor vehicles, motorcycles, etc.) which had been areas of focus in the past.

In terms of management issues, “preparation/implementation of legal regulations” was the biggest risk. Approximately 90 per cent of firms viewed this as a problem, indicating strong concerns about governance.

In 2018, progress toward intra-regional integration was seen with the signing of the African Continental Free Trade Area (AfCFTA).

The FTA most used by Japanese companies was the Southern African Development Community (SADC), for which South Africa has been a driving force.

A framework many are considering using is the Economic Community of West African States (ECOWAS) which includes Nigeria with its massive population.

The top three countries cited as worthy of notice in the future were, for the fourth consecutive year, Kenya, Nigeria and South Africa.

Much attention was given to Kenya’s active ICT and startup industry.

Nigeria is the continent’s most populous country and biggest economic power, while South Africa was highly evaluated for its outstanding economic infrastructure.

The survey indicates that as a regional base, South Africa is attractive because of the know-how and market networks accumulated by local companies giving a head start in regional development.

It was suggested that India’s appeal lay not only in its excellent strategy in the African market, where there is much affinity for the country but also in the fact that Japanese companies could launch operations in Africa utilizing their Indian bases.

For France, expectations were heard regarding the potential for cooperation in French-speaking African countries.

At the same time, Chinese companies emerged in the top ranks as competition for the first time in the past four surveys.

More than 40 per cent of companies, when asked about China and its strengthened economic relations with Africa, responded that competition has intensified and is having an effect on their own companies.

On the other hand, about 20 per cent of respondents answered that “the situation is bringing about business opportunities and benefits,” with comments including “We can utilize infrastructure developed by China.”

Support by the Japanese government

The 7th Tokyo International Conference on African Development (TICAD 7) will be held in Yokohama this August.

Currently, less than 30 per cent of companies reported that they are receiving support from the Japanese government.

At the same time, 75.7 per cent of companies reported that “the Japanese government should strengthen its support.”

Many expressed desire for the Japanese government to make various requests to the respective local governments regarding improving the investment climate.

Also, read of how Africa suffering from US-China trade wars, how Chinese Companies created 10,000 jobs in Kenya since 2016 and how China goes off the rails in connecting Africa with Chinese companies enticing Kenyan youth with ‘hundreds of local jobs’.