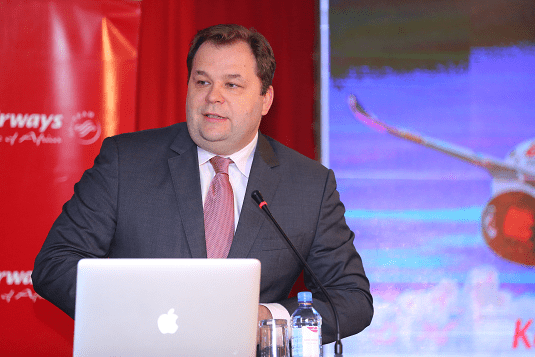 Mr Mikosz noted that for the remaining 7 months as CEO, he would continue delivering the improvements that KQ has been executing together and that are showing visible results.

This is a year before the expiry of his term, which was expected to happen in June next year.

In a memo to staff seen by The Exchange, the CEO explained why he made the decision to shorten his term.

“Since I started working as CEO at KQ I have always tried to inform you about any management decisions before you learn it from the public domain. It is in line with this practice that I would like to take this first chance to inform you that I have made the decision to shorten my contract term and I have decided to resign on personal grounds effective December the 31st of this year. It is my personal decision and I have obviously discussed it with the Board as well as with my family. I believe that this is the ideal timing to begin a transition process to find someone who will continue with the turnaround initiatives that we began 3 years ago.” He said in the memo.

Mr Mikosz noted that for the remaining 7 months as CEO, he would continue delivering the improvements that KQ has been executing together and that are showing visible results.

“I must point out that I am particularly proud of all of you as thanks to our collective efforts we’ve managed to bring the company from a historic loss in 2014 of Ksh 25bn and narrowed it down to Ksh 7.5bn ($74 million) in just 4 years. My clear intention is not to slow down for a single day, and we will continue this improvement trend as I am convinced that KQ is on a good path for a full recovery. You will notice the confirmation of this in the next few weeks through the announcements of some good news concerning our future developments.” He continued.

In a separate memo seen by the Exchange, Kenya Airways chairman Michael Joseph went on to inform the staff that in deed Mr Mikosz would be exiting the company by the end of the year saying that;

“Sebastian has brought to KQ a new energy and drive, which has brought good results with excellent long term prospects for our company. He has been the driving force behind the launch of the New York flights, new catering and uniforms (to be launched), a greater emphasis on accurate and timely information, new destinations and a proposed fleet renewal programme, amongst many other initiatives.” He told the staff in a memo.
This comes as the carrier gears to increase its connectivity by accessing more routes as well as increasing flights in the current routes.

It recently announced that it has resumed flights to Malindi with four weekly flights starting 10th June 2019. The flight, to be operated by JamboJet using a Bombardier Q400 will increase the frequency of flights by four, in addition to the nine weekly flights to this destination.

Kq will also added daily direct service from Nairobi to Bujumbura, Burundi starting 8 May 2019. The new flight to be operated by Jambojet on a Bombardier Q400 will be a direct flight and is set to reduce waiting times and offer better connections to Kenya Airways growing European and new America service.

Mr Mikosz said, “This increase to our local and regional Network is part of our strategic intent to expand our footprint across Africa.”