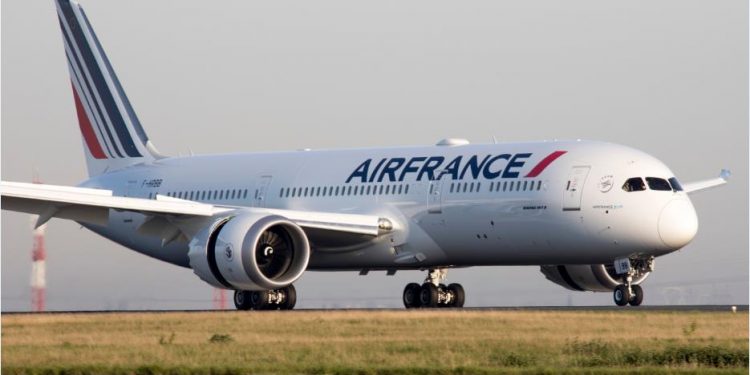 French national carrier Air France is set to launch two additional weekly flights to Nairobi beginning April 1, a move that will cement its presence after an 18-year absence which ended last year.

The increased flights between Charles de Gaulle Airport and Jomo Kenyatta International Airport (JKIA) is part of the airline’s strategy to expand its African network, the carrier has said.

Air France last year resumed flights to Nairobi after an eighteen-year hiatus. This month marks its first anniversary since resuming the route.

“We will be increasing our flights on the Paris-Nairobi route to five flights a week and we are confident that we will continue this growth in the coming years,” said Mr. Arthur Dieffenthaler, Air France General Manager for Eastern Africa region.

He was speaking during an event that brought together French companies in Kenya, organized by the French Chamber of Commerce ahead of the state visit to Kenya by the French President, Emmanuel Macron.

READ:Kenya already a French zone even as President Macron visits

He added that following resumption of flights to Nairobi, the airline has seen increased demand attributable to growing trade between Kenya and France. The latter also ranks among Kenya’s most significant tourism markets.

“Immediately we resumed flights on the Paris-Nairobi route, we recorded higher bookings with our partner Kenya Airways. Our return to this market signifies the confidence we have in strengthened ties between Kenya and France,” explained Mr. Dieffenthaler.

The move will also benefit French and Kenyan companies especially in horticulture, pharmaceuticals and other businesses that depend on air transport.

It will boost trade and tourism where France remains a key market source for Kenya’s tourism.

Air France says it will operate the latest generation aircraft on the route, Boeing 787- 9, equipped with the state-of-the-art cabin features to ensure a superior customer experience.

Air France entered into a joint venture partnership with Kenya Airways (KQ) in 2018. The two airlines will jointly operate 12 flights a week on the Nairobi-Paris route. Air France also operates a cargo flight into Kenya.

“Our partnership with KQ has been mutually fruitful with demand growing and also from exchange of aviation knowledge on the European and African markets,” concluded Dieffenthaler.

One of Acacia's mines warned over pollution

Boost for businesses as Co-op Bank kicks off SMEs campaign