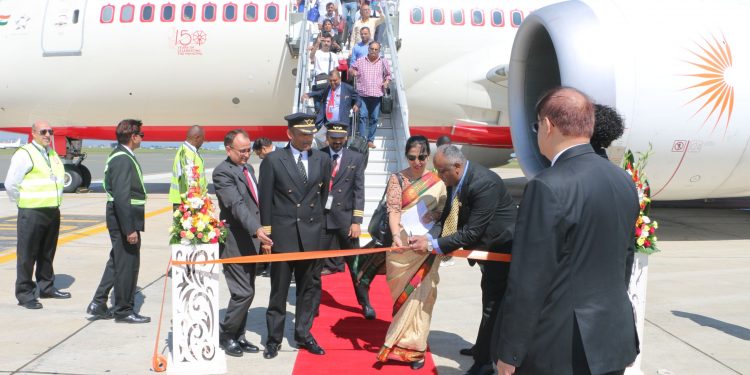 Passengers alighting Air India on November 27, 2019. The arrival marked the return of the airline to Kenya after 10 year/Courtesy

Air lndia’s flight from Mumbai to Nairobi landed at the Jomo Kenyatta International Airport (JKIA) on Wednesday with 100 passengers on board.

by Chacha Mwita
in Kenya, Travel
0
Share on FacebookShare on LinkedIn

India’s national airline has re-launched commercial operations to Kenya’s capital Nairobi, making a return to the route it abandoned a decade ago.

Air lndia’s flight from Mumbai to Nairobi landed at the Jomo Kenyatta International Airport (JKIA) on Wednesday with 100 passengers on board.

This marked the return of the airline to Kenya after 10 years.  It return is now seen a s a major boost for trade, investment and tourism activities between the two countries which have shared trade and economic ties for many years.

The airline will offer four direct flights a week-Tuesday, Wednesday, Friday and Sunday with plans to offer additional flights in the pipeline, it said during the launch.

According to tourism industry players, Air India will be instrumental in increasing uptake from both Tier I and II city markets of Delhi, Mumbai, Chennai and Bengaluru; and Kolkata, Pune, Hyderabad, Ahmedabad and others, utilizing its existing domestic infrastructure network, market knowledge and presence.

Speaking during the reception, KTB CEO Dr Betty Radier said that the return of Air India to Kenya would be a big boost to the strong ties the two countries have had.

She added that Air India arrival will help to promote tourism, trade, improve relationships and create opportunities between the two countries.

“The return of Air India to Kenya adds to the existing connectivity by KQ and other airlines flying into Kenya and thus further enhancing accessibility to Kenya. Kenya is confident of sustained tourist arrivals from India following this arrival,” said Dr Radier.

“The return of India Air, after about 10 years of absence is a big plus for Kenya’s economy as well as the tourism industry. KTB will continue to put effort to grow tourism from India, building on the goodwill and strong ties enjoyed by the two nations,” she added..

India has 75 Million passport holders which presents a great opportunity for Kenya to tap into with the arrival of Air India, especially during peak travel seasons of October to December when 25% of outbound travel happens and from April to June that has 50% of outbound travel from India.

On the cultural relationship between Kenya and India Dr Radier said: “Kenya has a large Indian community that form the 44th tribe, tourists from India will therefore feel right at home. They will find excellent food whether they are pure vegetarians, Jain, or prefer cuisine aligned to the Hindu or Muslim religious requirement.”