Wrigleys, an American company owned by Mars group has set an ambitious plan to set up a confectionery factory at Athi River which was announced by US millionaire Victoria Mars who met President Uhuru Kenyatta

by Kimani Chege
in Kenya, Manufacturing
0

American candy company, Mars group through its subsidiary Wrigleys East Africa, the manufacturers of PK chewing gum has announced plans to set up a $70 million factory in Kenya.

The factory, with a capacity to produce 7.8 billion pellets of chewing gum annually  is scheduled to open later this year and will also serve countries such as Uganda, Tanzania, Rwanda, Burundi, Ethiopia and South Sudan.

The announcement was made after one of the directors of the Mars group, Victoria Mars met with President Uhuru Kenyatta in which the company committed to helping Kenya achieve it manufacturing target in Uhuru Kenyatta’s ‘Big Four’ agenda.

Victoria Mars assured Kenya of her support for manufacturing.

“Your goal to boost local manufacturing capacity is timely and offers a great opportunity to expand employment and job creation for Kenyans, while cementing the country’s position as a key industrial hub in Africa. Wrigley is keen on growing and developing our business here and contributing to this noble objective.”

President Kenyatta said his government would continue to improve the country’s environment to do business.

He called on the company to take advantage of the recently adopted agreement to establish a continental Free Trade Area (CFTA) to increase its production to serve African countries.

President Kenyatta also commended the company for its initiative in Mt. Elgon where it is supporting 20,000 dairy farmers.

Ms. Mars briefed the President on various initiatives undertaken by the company to expand its operations in the region and provide social and economic opportunities for Kenyans; including an entrepreneur program, Maua which currently has over 700 entrepreneurs.

He said the new factory would not only create jobs but also provide opportunities for Small and Medium Enterprises through its expanded value chain. 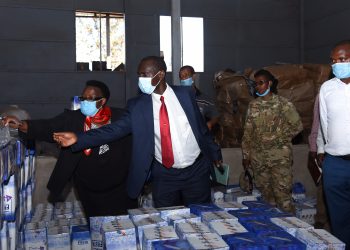 Barclays Bank Q1 profit up 8% despite squeeze on loan book