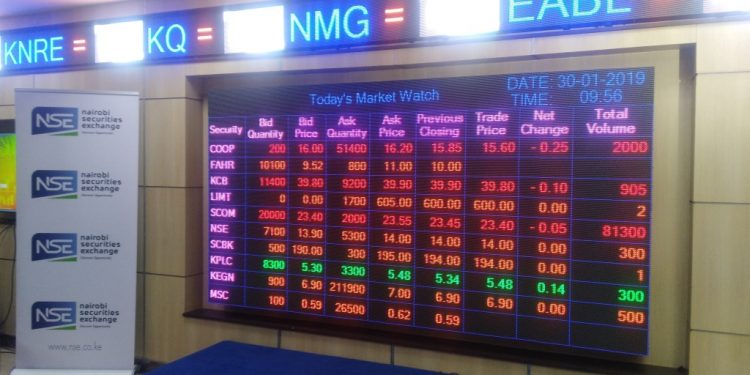 This is up from Ksh2.47 billion recorded the previous week.

Week on week turnover at the Nairobi Securities Exchange (NSE) rose to Ksh5.58 billion (US$56.04 million) on 92.7 million shares, as trading took a break for the weekend after five days of mixed performances.

This is up from 79 million shares valued at Ksh2.47 billion (US$24.8 million) transacted the previous week.

The Nairobi Securities Exchange (The Company) has pegged the rise in turnover to the sale of B.A.T shares, where the company was the week’s main feature with 5.8 million shares valued at Ksh3.5 billion changing hands at between Ksh560.00 and Ksh604.00.

The manufacturing and allied sector  where BAT falls under had shares worth Ksh3.8 billion transacted which represented 68.70 per cent of the week’s traded value. East Africa Breweries Limited (EABL) moved 1.4 million shares valued at Ksh292 million and closed the week at Ksh209.75.

The energy and petroleum sector had shares worth Ksh136 million transacted which accounted for 2.44 per cent of the week’s traded value. Umeme was the most traded counter in this sector with 22 million shares valued at Ksh121 million changing hands at between Ksh129 and Ksh135.00.

The construction and allied sector had shares worth Ksh38.8 million transacted which accounted for 0.70 per cent of the week’s traded value. Bamburi cement moved 294,000 shares valued at Ksh38 million and closed the week at Ksh130.00.