While others are still trying to wrap their heads around blockchains and the safety of cryptos, Africa is embracing this digital currency with both hands. So much that in Kenya, you can even buy your groceries and I mean vegetables with cryptocurrencies.

That’s right, and this is not only in urban centres like the bustling capital of Nairobi, no, no, no, but it is also in the villages, upcountry. Peasants on the Coastal towns are trading in cryptos, buying and selling. Here we are not talking of mining cryptos only but rather using the digital currency for normal day to day trade, like Is said to buy supplies.

The way it works is, the cryptocurrency, a famous one in Kenya is coined Sarafu, which has now become an accepted medium of transfer such that one can use Sarafu to trade for goods and services.

Sarafu and others like it are what are known as Community Inclusion Currencies (CIC), that is, a currency that operates because a community has agreed on its value and to use it as a means of exchange. It allows people to give or take credit without necessarily needing to use the national currency.

“Anyone with a Kenyan mobile phone line can enrol. Users are given 50 Sarafu for free. After that, they earn coins by selling a product or service to another user,” explains Will Ruddick the founder. 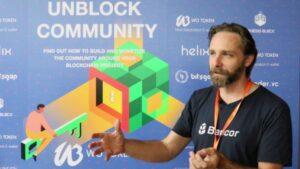 The Kenyan digital currency Sarafu was created by the American economist Will Ruddick. He started it as a project conducted through his nonprofit called Grassroots Economics Foundation (GEF).

Ruddick, an economist is focused on currency innovation and pioneered the Sarafu community currency in Kenya. He is also the founder of  Bangla-Pesa which uses a mutual credit model instead of the national currency.

You might be wondering why or even how are people able to trade with these ‘informal currencies’ but as Ruddick explains; ‘…money is really an invention that works only because a community stands behind it, willing to use it in exchanges for goods and services…’ that is money, a medium of exchange that is commonly accepted.

So for the Sarafu and the Bangla-Pesa and others like it, what you have is a poorer community that cannot afford to acquire the national currency to meet its needs, so they create their own currency, simple.

So this community then agrees on a set of rules that govern their currency acquisition and use. For example, you can only as much Bangla-Pesa as you can use in one particular day and it is mostly to meet basic needs like food and water.

“No one is allowed to have more than 400 Bangla-Pesa at any one time. In developing these programs, we incorporated a system of guarantors to the currency and a community fund to make the system more secure and sustainable,” details the founder.

The voucher, like regular cash allowed the bearer to trade up to the value of the voucher and for the purchase of basic goods as mentioned earlier, food, water etc. With the system generally accepted, in 2018, the organisation partnered with Bancor and migrated from paper to liquid community currencies (LCC) on the blockchain.

Today, all community currencies on the Sarafu Network are 100% digital and transactions occur through US dollar codes sent between members’ feature phones and the local telecom network,” explains the founder.

Since the Sarafu currency has been well taken by peasants, it is in turn been well received by business owners who are now able to get fresh produce from farmers in exchange for Sarafu.

Sarafu is popular among the restaurants that deal directly with farmers as well as supermarkets that want fresh produce.

So this is a clear example of cryptocurrencies giving the community an option to monetize resources in a way that they cannot do with cash.

Are Cryptocurrencies A Threat To The Economy?

So what does it mean for regular money of people decide to forego the use of national currencies and instead go for trading vouchers or cyrptos? There is a threat here and as you can imaging the community currency idea did not sit very well with the Kenyan government, well at least not in the beginning.

“They feared that the Bangla-Pesa might try to displace or challenge Kenya’s national currency, the shilling,” Ruddick recalls his arrest.

At least six members of GEF were arrested and charged with possession of illegal currency papers in late May 2013. The Bangla-pesa was declared illegal and all who were using it were told to stop with immediate effect.

“We found it all perplexing. Why should a simple mechanism that helps people self-organize themselves to make ends meet pose a threat to the country’s Central Bank?: Ruddick goes on to lament.

However, the air was cleared after he managed to convince the prosecution that the Bangla-Pesa cannot be traded for shilling and that it only served as a trading voucher not a currency.

“I think we also convinced the prosecutor that our goal was and is to uplift the living standards of the poorest…the prosecutor found we had broken no laws and dropped the charges.”

As community currencies continue to gain popularity, so are cryptocurrencies, all of which are empowering Africa’s poorest to command a means of exchange that they can afford. In a community that lives hand to mouth, these currencies make all the difference. It is the difference between going hungry and getting something to eat. So we can expect more and more communities in Africa to switch to the use of these systems. How the central governments will accommodate community currencies remains to be seen but if Kenya is any example to go by, the currencies are no threat to the economy, in fact they improve the lives of the people by empowering them to meet their daily needs.