NAIROBI, Kenya, Jul 18 –  East African Malting Limited (EAML) a subsidiary of East African Breweries Limited (EABL) has launched a new sorghum variety, which delivers up to 15 per cent higher yields and is more resilient to ever changing weather conditions.

The new variety referred to as Hybrid White Sorghum 23012 was developed in partnership with Egerton University and Kenya Highland Seeds Company over the last six months. It is aimed at enhancing sorghum farmers’ livelihoods besides ensuring

It is aimed at enhancing sorghum farmers’ livelihoods besides ensuring sustainable supply of raw material for the production of Senator keg.

The General Manager of EAML, Lawrence Maina revealed that commercial production of the seed has already begun.

“With the demand of Senator Keg soaring, and the opening of the plant in Kisumu, our plan is to recruit more farmers, in order to ensure that our customers continue enjoying Senator keg uninterrupted. Our plan is to increase the current sorghum production from 30,000 tonnes to 40,000 tonnes by 2018,” Maina explained.

The new variety which has been piloted at the 4000 acre Lalela farm at Enelerai in Narok West will be available to farmers in Bura, Hola, West Kano and Wei Wei irrigation schemes.

According to  Maina, the new variety which is resistant to pests, birds, drought and root lodging during heavy rains and windy conditions has a high production and is easy to harvest with a special combine harvester.

Previously, EAML’s contracted farmers had a choice between the two varieties that were available, Gadam and Sila, which flower in 40 to 60 days and mature in about three months depending on the altitude.

He further explained that the initiative is aligned to EABL’s Jilishe kisha Uuze (Grow, feed and sell) campaign.  The campaign encourages farmers’ to grow sorghum for food and sell the balance, for commercial use.  The program target farmers with at least an acre of land in the three counties.

During the forum, farmers were also taken through the EAML Sorghum Value Chain, from seeds selection, land-tilting, fertilizers, importance of extension officers, contracts drafting, to storage as well as harvesting.

“The open forum imparted potential sorghum farmers with information on sorghum farming best practices as well as contract farming – whereby the farmers can benefit from the ready and reliable EABL market,” added Maina.

Maina noted that the initiative will not only boost the company’s local sourcing strategy which has risen from 40% to 80% in the last 3 years but will also reinforce EABL’s sustainability strategy, deepening socio-economic benefits to the rural communities.

“The new seed will potentially create and accelerate a robust supply chain, contributing to the establishment of a stable macro-economic environment steered by agriculture,” said Maina.

Over the last decade, the sorghum value chain has become vibrant, in direct response to the guaranteed market EABL presents to farmers.

The company has continuously reached out to farmers, encouraging them to grow quality sorghum for commercial consumption. 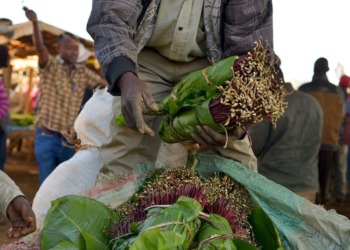 Kenya tea exports fall in May by 35 percent