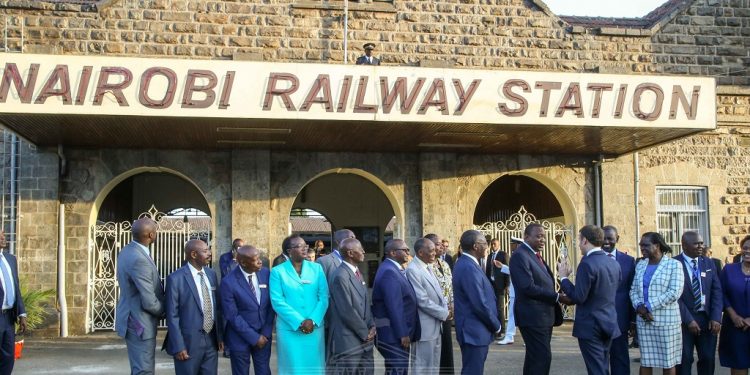 President Uhuru Kenyatta with French President Emmanuel Macron at the Nairobi Central Railway Station. A commuter rail project will be implemented in partnership with a French Consortium. [Photo/PSCU]

President Emmanuel Macron has come to Kenya with a promise of a French Consortium and three billion Euros in business deals for East Africa’s biggest economy.

A commuter rail line connecting the Jomo Kenyatta International Airport (JKIA) and the Central Business District (CBD) should be ready in two years following an agreement between Kenya and French governments to work on decongesting the city of Nairobi.

Speaking after touring the Nairobi Central Railway Station in the company of French President Emmanuel Macron, President Uhuru Kenyatta said bureaucracy and government red-tape should not delay the project.

Easing movement between the CBD and JKIA

The Nairobi Airport Line is aimed at easing movement between the city centre and JKIA, East and Central Africa’s biggest airport and transport hub.

Kenyatta said officials should fast track agreements so that the project is completed within the next two years.

The commuter rail project will be implemented in partnership with a French Consortium.

President Kenyatta said the commuter rail and Rapid Bus Transit system planned for the city will support the government’s focus on decongesting the Nairobi Metropolis and, once completed, will greatly reduce travel time between JKIA and the city centre.

“A properly functioning urban commuter rail system and Bus Rapid Transit System (BRT) in our cities and particularly here in Nairobi will completely transform the lives of millions of urban dwellers as well as make Nairobi a wonderful experience for tourists and visitors,” said Kenyatta.

Urban commuter rail and the BRT

He said the government has prioritised the development of the urban commuter rail and the BRT to reduce traffic congestions and boost the economy of the city.

Saying that Kenya becomes stronger when it diversifies its partners, Kenyatta thanked the French partnership in the development of the commuter rail.

Besides the link between the city and the airport, the government has already embarked on a refurbishment of the whole commuter rail system in the city.

As part of this commuter railway improvement, the Kenya government has approved Kshs 10 billion for the rehabilitation of four existing lines with the heaviest passenger-carrying potential.

The investment also provides for the acquisition of refurbished trains which have raised a lot of questions among Kenyans.

The Diesel Multiple Units (DMUs) and the rehabilitation of the metre gauge railway network and the development of new stations as well as the building a public transport network that straddles from Ruiru to Athi River.

President Macron said the French Consortium will play its part in providing a mobility solution for Nairobi.

Macron, who is in Kenya for the first State visit by a French President said he was happy with the increasing partnership between Kenya and France.

He said it was an indication of the future of Africa, which he said is led by innovation and is not relying on the beaten paths in terms of achieving development.

Macron said France will deepen its partnership with Kenya in security, health and education.

He said Kenya and France will sign deals worth three billion Euros during his visit.

You can also read how French President Macron differs with Trump over tackling global challenges and why Kenya is already a French zone even as Macron visits and also about the Chinese investing in $130 million USD energy project in Kenya.