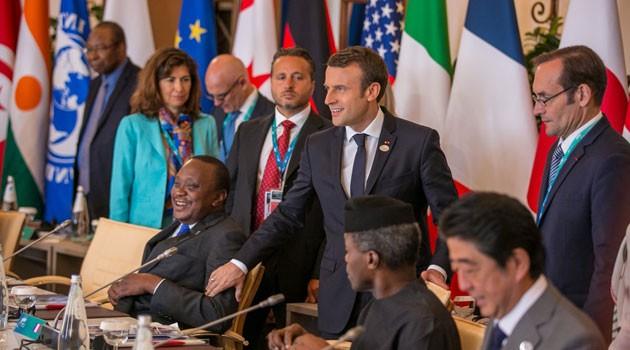 President Emanuel Macron and President Uhuru Kenyatta in a past event

Kenya already a French zone even as President Macron visits

President Emanuel Macron will be visiting Kenya in March in a visit that will see the two countries sign bilateral agreements. As the governments meet, the private sector has already made significant entry into the country

French President Emanuel Macron  is expected to visit Kenya in March for official engagements with his Kenyan counterpart Uhuru Kenyatta and is among other things expected to conduct talks on how Nairobi can launch an urban rail system.

The announcement made in Nairobi by President Uhuru Kenyatta after meeting French envoy to Kenya French Ambassador Aline Kuster-Menager  and mentioned of greater cooperation between Kenya and France. In a statement to the newsrooms, Mr Kenyatta said he expected the visit would “break new ground in the bilateral relations” between Kenya and France.

Though this move is seen as unprecedented for the French President touring Kenya, the interest of the European nation, traditionally associated with Western African countries is rapidly changing with significant investments in East Africa.

France is enjoying a growing influence in business and trade in the region with significant investments in energy, transport, communication and manufacturing.

There is also growing in the East African Community by French with  a French delegation visiting Arusha in 2018 to discuss concrete priority areas at the EAC that could be supported by France through the French Development Agency (AFD).

A statement from East African Community secretariat noted that EAC initiated discussions with AFD to look into the possibilities of the latter supporting EAC priority projects in different sectors.

The success behind French investment firms in Uganda

Kenya leading in getting French Investments in East Africa

There has been significant investments in Uganda, Tanzania but Kenya has seen the greatest share of investments.

AirFrance has resumed the Kenyan market after a 18 years absence. While launching AirFrance, the airline senior vice president for Africa Franl Legre said, “To date, we have over 80 French companies that have selected Nairobi as their regional hub and this is one of the many opportunities we are looking to tap.”

Leading among these investments include Rubis Énergie has offered a takeover of Kenyan oil marketing company Kenol Kobil in the latest merger and acquisition deals in East Africa.

Rubis which specializes in storage, distribution and sale of petroleum, liquefied petroleum, gas (LPG), food and chemical products, on October 24 2018, served the board of directors of KenolKobil a notice of intention to make a cash offer which it we intend to acquire 100 per cent of the ordinary shares in the Nairobi Securities Exchange listed firm.

SunCulture’s flagship product “RainMaker” – an innovative, internet-connected solar water pump – is smart, mobile, easy to use and helps save water and fertilizer.

France24, the international news channel based in Paris, is also operating a free to air channel in Kenya in what is seen as a providing news and information for a growing French audience in Nairobi and Kenya as well as serving a growing lists of French firms into Eastern Africa.

France24 which became the first international news channel from either Europe or America to offer free to air content in Kenya.

Proparco is deploying its investment of US$ 3 million as a way to partner in JUMO’s development and to help grow the mobile loan sector in support of low-income populations, especially informal micro entrepreneurs who are frequently shut out of the formal banking system.

In healthcare, French Tech Company Tech Care For All (TC4A) recently launched its operations in East Africa to be headquartered in Nairobi after raising $2.5 million ( Ksh250 million) capital for its global business.

The company, which is registered in Belgium, has over the last year entered the Indian and West African markets, choosing Senegal as a hub for the latter. The firm focuses on improving health outcomes through leveraging on technology.

TC4A Founder and Chief Executive Emmanuel Blin says  the company was attracted to Kenya by the country’s leadership in harnessing the power of digital tech in other sectors such as financial services and by its dynamic entrepreneurial culture.

“We chose Kenya because of President Uhuru Kenyatta’s Big Four Agenda that has Universal Health Coverage as a key priority, so there is a national strategy behind that; there is also a great digital health ecosystem here.   We are excited to be creating direct and indirect jobs in the Kenyan market,” Blin said.

Societe BIC, the French multinational and pen manufacturer at the close of 2018 also completed the transfer of Haco Industries Kenya Ltd manufacturing facilities in Kenya and distribution of stationery, lighters, and shavers in East Africa to BIC.

This acquisition is in line with BIC’s continued growth strategy in Africa, one of the most promising markets for BIC products in the world.

According to an agreement drawn between the two firms the change of manufacturing and distribution in the East African region which was controlled by Haco Industries will see Haco continue in its core business which include production of body care products with its signature lotion Amara.

BIC will on its part use the same facilities that Haco was using though it is expected to introduce automation with fears of further redundancies.

HACO Industries aims to diversify its portfolio and presence in Western & Southern Africa.

The investments in Kenya by the French businesses will offer a flurry of direct jobs to the Kenyan market, as the East African nation battle out the high rate of unemployment especially among the youth.

The Government expects to rake in revenues from the huge investments that could be ploughed back to add value to the business chain.

Infrastructure, energy and manufacturing are among the key areas that will get a boost from the firms, catapulting their presence in the market.

French firms have had a warm welcome in Kenya and their progress has opened avenues for more of such investments to be made possible.

Read also the worth of East African market