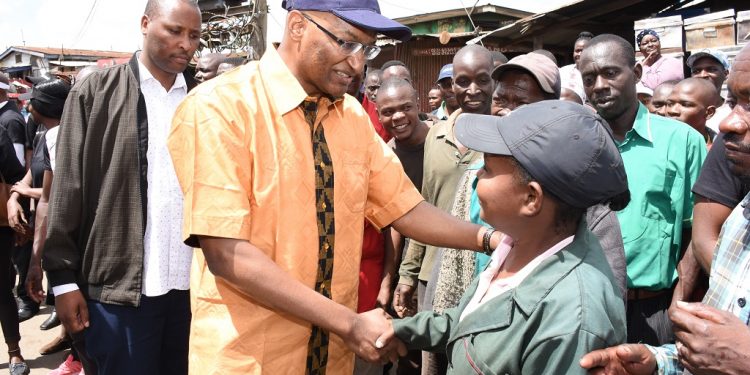 CBK Governor Dr Patrick Njoroge during the pilot phase launch of Stawi. He has discredited the news of Kenya’s growing economy without effects on those who need it the most. [Photo/Stawi]

Who is fooling Kenyans on the growth of their economy?

IMF holds that inflation remained within the target band

Just days after Kenya repealed a rate cap which portends the return of expensive loans for borrowers, the International Monetary Fund (IMF) visited the country to “discuss economic development”.

It adds, “Inflation has remained within the target band and stood at 5.0 per cent in October (year-on-year).”

The IMF visit to Kenya

A staff team from the IMF led by Benedict Clements, visited Kenya from November 18-22, 2019, to among other things discuss “recent economic developments and the government’s reform plans”.

Another mission is planned in early 2020 to hold discussions on a new precautionary stand-by arrangement and undertake the Article IV consultation discussions.

According to the team, Kenya’s economy has continued to perform well.

At the end of the visit, Clements said, “Kenya’s economy has continued to perform well. Real GDP growth averaged 5.6 per cent in the first half of 2019, despite the late-onset and below-average rainfall that affected agriculture production. Growth is expected to accelerate in the second half of 2019 and 2020. Inflation has remained within the target band and stood at 5.0 per cent in October (year-on-year).”

He added, “The current account deficit has narrowed, and foreign exchange reserves are adequate. Credit growth has remained low (6.6 per cent year-on-year in October) but is expected to rise steadily because of the recent elimination of interest rate controls and deployment of innovative credit products targeting small enterprises.”

In what was a major win for the Bretton Woods institution, Clements said that the staff welcomes these reforms in regards to the rate caps review which has been a pet topic for the IMF.

The conclusion was the review would support higher and more inclusive growth.

“The elimination of the interest rate controls will also provide greater flexibility for monetary policy. After reaching a budget deficit of 7.7 per cent of GDP in FY2018/19, the authorities aim to significantly reduce the deficit. Progress in this direction, including the design of tax and expenditure reforms that support a growth-friendly fiscal consolidation, would be important to anchor a new Fund-supported programme.”

The team met with the Cabinet Secretary for the National Treasury, Ukur Yatani; the Governor of the CBK, Dr Patrick Njoroge; the Head of the Public Service, Dr. Joseph Kinyua; the Principal Secretary for the National Treasury, Dr Julius Muia; the Deputy Governor of the CBK, Sheila M’Mbijjewe; and senior government and CBK officials.

The IMF staff also “had productive discussions with representatives of the private sector and development partners.”

But who is fooling who on Kenya’s economic growth

Time and again we have heard stories of how well Kenya’s economy is doing, attracting unprecedented FDIs and the changing fortunes in a country whose majority survive on less than a dollar a day.

But it seems to be working in paper and for those who need this growth the most.

The CBK governor has faulted Kenya’s economy structure for what he said is delivering economic growth without jobs and a rise in incomes.

Njoroge said that Kenyan households have not felt the growth in the much-hailed GDP adding that the big infrastructure spending has not made Kenyans wealthier.

“It’s true you have GDP numbers, but you can’t eat GDP. At the end of the day, what’s needed is specific income, plus jobs,” he said.

And even before Dr Njoroge’s sentiments faded, the World Bank released a report saying that Kenya’s ambitious Sh3 trillion budget was unrealistic going by the economic projections.

For the World Bank, a sister institution to the IMF, the projections were that Kenyans should be feeling richer than they were four years ago.

In their report released in early November, the World Bank said that Kenyans were not as poor indicating that poverty has decreased from 46 per cent in 2005 to 36 per cent in 2019.

The report indicated that Kenya had a strong rebound in 2018 but the economic activity in the country has moderated in 2019.

The slowdown, according to the Kenya Economic Update 2019, is primarily due to lower agricultural output and a considerably weak private sector investment.