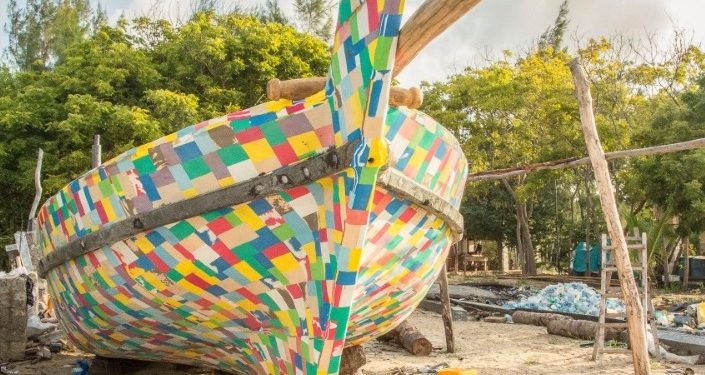 Lamu to Zanzibar- Flipflopi to make its maiden overseas voyage

by Kimani Chege
in Kenya, Trending
0
Share on FacebookShare on LinkedIn

The Flipflopi sets sail on the first overseas expedition in January, travelling 500kms from Lamu to Zanzibar to raise awareness about marine plastic pollution.

Kenyan recycled plastic manufactured dhow is set to make its maiden international trip with a voyage to Zanzibar in a bid to raise awareness over a global environmental threat- ocean plastics.

If the status of marine litter continues unabated, there will be more plastic in the oceans than fish by the year 2050, according to World Wildlife Fund (WWF). Currently, the trash in the world’s oceans is on the verge of getting to catastrophic levels. The effects on marine life, habitats and people are already being felt.

According to the United Nations Environment Programme (UNEP), approximately 8.8 million tons of plastic waste enter the worlds  oceans every year. This is the same as a garbage truck dumping a full load of trash into the ocean every minute.

Backed by UNEP Clean Seas Initiative, the Flipflopi sets sail on the first overseas expedition in January, travelling 500kms from Lamu to Zanzibar to raise awareness about marine plastic pollution.

Departing from Lamu on the Kenyan coast on 24th January 2019, the FlipFlopi will sail south along the coasts of Kenya stopping in Watamu, Kilifi, Mombasa and Diani, before crossing into northern Tanzania with planned stops on Pemba Island, and onwards into Stone Town, Zanzibar. The voyage will take between 12 and 14 days.

The Flipflopi team will be visiting schools, communities and government officials along the way sharing solutions and changing mindsets.

“Remember, this was never really about the boat – we simply want to demonstrate that single use plastic doesn’t make sense. We hope people around the world are inspired to find their own ways to re-purpose ‘already-used’ plastic,” a statement from the Flipflopi team read.

The voyage will be making stopovers in different areas organising beach clean-ups with local partners, plus visiting a number of marine conservation and plastic recycling initiatives.

At 10 metres in length and weighing about 5 tonnes – it is quite a spectacle.
The FlipFlopi Projects chief boat builder – Ali Skanda, Project leader and boat builder comes from a family of carpenters and dhow builders in Lamu that traces its roots back to the very first settlers arriving on Lamu in the 1300’s. His father and grandfather were the first craftsman to carve the ornate wooden doors that have – alongside Dhow building – since become synonymous with Lamu.

Ali himself has taken up the baton and is a renowned ‘master carver’ and Dhow Fundi (builder) in his own right – with examples of his work found in museums and collections around the world – the National Museum in Washington DC among them. Ali is passionate about Lamu’s heritage and about preserving the health of the oceans both for marine life and coastal peoples worldwide.

Lamu Island is on the north Kenya coast, and has long been the most important centre for dhow building in the region.  Lamu Town itself is a UNEP World Heritage Site and is the oldest and best preserved Swahili settlement in East Africa, having been inhabited since 1370.

Waste plastics, mainly from Lamu’s beaches, were used to construct the entire boat. The keel, ribs and structural elements are all made from recycled plastic including bottles and bags, whilst the hull and decking is covered completely by re-purposed flip-flops.

Despite the unusual materials, the vessel was constructed by local craftsmen using traditional methods, and we were thrilled to see it set sail with Ali Skanda at the helm and the tourism minister and entourage enjoying the ride.

Following our expedition from Lamu to Zanzbar in early 2019, the Flipflopi will be making a different expedition – this time on land, on the back of a lorry.  That is because the team has been invited to participate in the United Nations Environment Assembly in Nairobi on the 11th to 15th March.

The assembly is a gathering of Environment Ministers, high ranking officials, and business leaders from around the world – and the focus of this, the fourth UN Environment Assembly is; Innovative solutions for environmental challenges and sustainable consumption and production

At the invitation of UNEP, the Flipflopi will be transported on the back of a large articulated lorry inland from Mombasa to Nairobi – where she will form a centre exhibit for the conference.  A colourful and immediate example of what is possible when you think about plastic as re-usable, part of a circular rather than linear economy.

“Given the focus of this UN Environmental Assembly on ‘sustainable consumption and production’ – we are delighted to be able to showcase a globally leading voice on precisely these topics, especially one that has its roots right here in Kenya,” notes Daniel Cooney, UN communication deputy Director with UN Environment.

Eventually in 2021, the dhow will depart from Lamu and sail south along the coasts of Kenya, Tanzania, Mozambique and onwards into South Africa. The voyage will take between 3 and 4 months, to reach Cape Town.

Safaricom's TubeStar base station a precursor to 5G in Kenya?