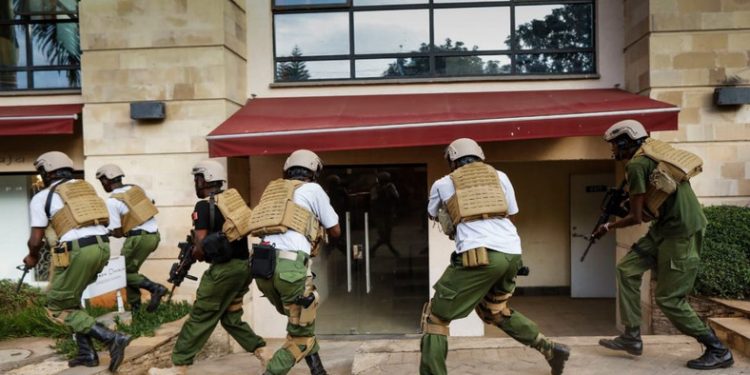 by Kimani Chege
in Entrepreneurship, Kenya, Trending
0
Share on FacebookShare on LinkedIn

Westlands is the nerve centre of foreign businesses in Kenya including US, UK and Europe and it has been the thought-engine of FDI in Kenya through Fintechs, Agritech, venture capital and other FDI enhancers

The terror attack on Nairobi’s Dusit Hotel Complex may have recorded less casualties than the previous ones in Nairobi but it has left a greater mark on the country’s nerve-end of international business communities.

The siege lasted almost 18 hours leaving an official figure of 21 people dead, tens injured, hundreds displaced in terms of daily working routine and millions of dollars lost both in infrastructural and lost human capital and time.

This being the second time there has been an attack on Nairobi’s influential and palatial commercial hub of Westlands, many security experts have said the area will remain a key target for terror groups.

Westlands hosts a community of foreign based companies, start-ups and financial organisations as well as embassies and consulates. They are drawn by order prevalent in the area as well as a combination of security, good infrastructure as well as social amenities.

To be specific, Westlands is the hub of American, British and other European interests. It is a home to both start-ups with massive backing from the West in capital as well as in human resources.

The Dusit Hotel and office complex was such a facility. Inside the complex, there was a full-board 5-star hotel – Thai owned Dusit Hotel, where guests can live and work while on a visit.

The hotel describes itself as a “vibrant city hotel retreat where style, entertainment and art converge. Cocooned away from the hustle and bustle in a secure and peaceful haven off the leafy suburb of 14 Riverside Drive, it’s just minutes from the central business district and merely a stone’s throw away from the heart of the city’s pulsing social scene.”

In the same office complex, it houses major foreign companies which have been enablers as well as actors in bringing to Kenya foreign investments. For example, the complex hosts Metta an entrepreneurs’ club that connects people, ideas and resources, bringing global start-up ecosystems worldwide closer together.

Metta in Nairobi has been pulling start-ups into Westlands

Metta seeks to bring together start-ups, innovators and large companies together in a single space allowing them to connect on both a local and international scale.

Metta has been instrumental in pulling other foreign based start-ups and enablers to Kenya. In the complex, for example, Metta has been working with I-Dev, an international business enabler that has been working with global companies to pull investments into Kenya. Unfortunately, the CEO of the company Jason Spindler was among those who never left the complex alive during the attack.

I-Dev has worked with other companies with an American or European interests including Burn International which makes efficient stoves as well as Twiga foods which has introduced various interventions in food supply chain in Kenya.

In the same sad moment, Luke Potter, the Africa programmes director of Gatsby, a man who recently relocated to Nairobi to push social investments was also killed in the attack.

Away from the Dusit Complex, Westlands has a high number of American tech companies and creative spaces. For example, the Nairobi Garage offers many foreign based entrepreneurs spaces to be creative and make money.
The firm offers co-working space, where businesses rent space and use facilities such as meeting rooms for as short as one month or a day.

Most of foreign investments in Kenya has a direct link to this hub as it host many players mainly those in tech.

The UNCTAD 2017 report on investments in Africa noted that FDI (foreign direct investment) inflow into Kenya increased to $672 million, up by 71 per cent, due to buoyant domestic demand and inflows into ICT industries.

Also, media entity Disrupt Africa last year released a research which puts Kenya as the top country in attracting agricultural technologies (agri-techs) and also the first in Fintechs followed by Nigeria and Ghana. The three countries account for over 60 per cent of agri-tech startups active in Africa.

The research shows that while Kenya was the early pioneer of the African agri-tech sector, accelerating interest in West Africa over the past two years means this region now dominates the market; and is home to two of the top three agri-tech ecosystems on the continent.

The number of startups operating in the market has grown by 110 percent over the past two years, and over US$19 million invested into the sector in that period.

The Agrinnovating for Africa: Exploring the African Agri-Tech Start-up Ecosystem Report 2018, records 82 agri-tech startups in operation across Africa by the start of 2018, with 52 percent of these ventures launched in the past two years.

Unlike Westgate attack in 2013 which only inflicted fear on shoppers and restaurants in the mall, the Dusit Complex hosted many offices and businesses. This has left a sour taste on the mind of local and foreign investors.

The fear that Westlands has become a prime target for foreign investors by terrorists is rife. Westgate Mall left 71 people dead including four attackers and 175 injured on September 21, 2013.