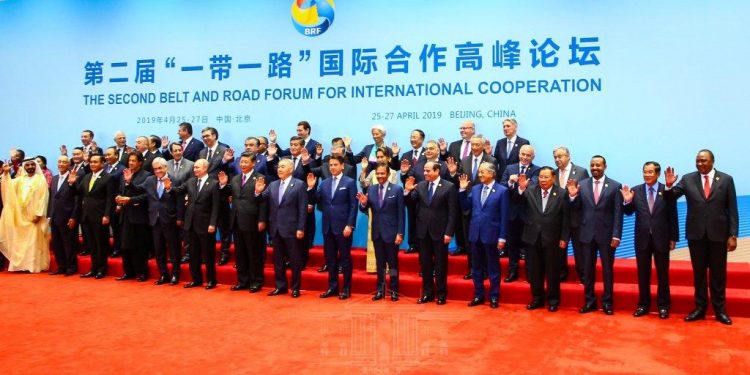 Leaders pose for a photo during the second Belt and Road Forum for International Cooperation (BRF) in Beijing China/Credit: State House Kenya.

What Kenyatta secured at China Belt and Road Summit

As global leaders and the business community met in Beijing, China, for the second Belt and Road Forum for International Cooperation (BRF), Kenyan’s were keenly watching to see what will unravel.

The forum which took place last week brought together about 37 Heads of States, top government officials and business leaders from over 100 countries, who met to discuss issues of inter-continental connectivity for global trade.

A project of President Xi Jinping, China is using the Belt and Road Initiative (BRI) to enhance both China’s development and its cooperation with global partners.

It had earlier been expected the government will use the Beijing meeting to secure additional funds from China for construction of Phase 2B of the Standard Gauge Railway (SGR).

As per earlier reports, including confirmations by government officials, Kenya had hoped to secure a Ksh370 billion (USD3.65 billion) loan for development of the project whose Phase One (472 kilometre Mombasa —Nairobi line) is currently operational.

It was constructed by China Road and Bridge Corporation (CRBC) on a Ksh327 billion (USD3.2 billion) loan from the Exim Bank of China, with operations commissioned by President Kenyatta on May 31, 2017.

Phase 2A is being developed by a sister company-China Communications Construction Company (CCCC), funded by the Chinese at a cost of Ksh150 billion (USD1.48 billion).

The 120-kilometre line which runs between Nairobi-Mai Mahu and -Duka Moja, a small centre between Suswa and Narok town, is 90 per cent complete.

READ:As SGR heads to Naivasha, Cargo to Nairobi still not off the ground

The government needs funds for Phase 2B (Duka Moja-Kisumu) and the final stretch (Phase 2C) connecting Kisumu to the Kenyan-Ugandan border of Malaba.

In a recent meeting at the Chinese Embassy in Nairobi (March 19), Kenya Railways acting Managing Director Philip Mainga had said the government  was keen to secure funds during the BRF meeting.

“We hope to sign phase 2B during the meeting,” Mainga said, “Kenya Railways is working with the Chinese government in achieving the commitment we have on the 974 kilometre Mombasa-Malaba SGR project.”

Loan or no loan?

Efforts by the government to secure the facility, however seems to have hit the rocks, with the government shifting its position on borrowing from the Chinese to fund the remaining parts of the project.

According to reports, China failed to agree on the terms of the loan that the Kenyan government had proposed.

It is said the government had asked for half of the money to be given as a grant and the remaining be a loan with more flexible terms.

The Chinese on the other hand are said to prefer collateral, something the Kenyan government is keen to avoid.

This is in the wake of a ballooning debt portfolio which hit USD53.3 billion (about Ksh5.406 trillion) in December, nearly double the country’s annual budget.

Traditionally, the Chinese have used grants and interest-free loans to rope in least developed countries to its Belt and Road Initiative.

On Saturday,( March 27) the government dismissed claims that it had failed to secure funds for the extension of the SGR from Naivasha to Kisumu at the forum, where President Kenyatta met his host Xi Jinping.

“It is important to note that the question of funding for the extension of the Standard Gauge Railway from Naivasha to Kisumu was not on the agenda of the meeting between the two Presidents,” State House Chief of Staff Nzioka Waita said in a statement.

“Whilst making it clear that the Government of Kenya did not discuss any funding proposals for the extension of the SGR at this meeting, it is very critical to state at this point that the SGR project is a regional project and the complexities in negotiating its completion involve several countries and securing financing for its completion could take several years of intricate negotiations,” he added.

Transport Cabinet Secretary James Macharia has since said the SGR, which has reached Mai Mahiu, will now be linked to the old Meter Gauge Railway (MGR) to allow transportation (mainly cargo) into the hinterland mainly Uganda.

“We have about forty three kilometers between Naivasha SGR and Naivasha MGR. The meter gauge is an investment that was made many years ago, it is being used to transport goods to Uganda and therefore we have to make sure that that connectivity in Naivasha is quickly addressed,” Macharia said.

“One of the things we are discussing in this visit is how we can quickly close that gap in Naivasha and we have already good proposals to make sure that when we finish the SGR in August, we can  move goods from Naivasha SGR to Naivasha MGR. That way then we have a seamless movement of goods all the way from Mombasa to Kampala,” the CS added.

Shifting focus from the SGR loan, the government has affirmed President Kenyatta did not return home empty handed.

The President who participated at both the Summit and High Level Heads of State Meetings oversaw the signing of a trade agreement for the export of frozen avocados from Kenya to China.

This follows the signing of an MoU on Sanitary and Phytosanitary Standards late last year for the export to China from Kenya of various horticultural products.

“The trade agreement on avocado which is a huge boost to our farmers marks the beginning of a new chapter in our relations with China that aims to address the trade imbalance and promote mutual economic benefit,” Waita said.

Current trade is in favour of China. According to the Kenya Economic Survey 2019, released last week, imports from china were valued at Ksh370.8 billion (USD3.65 billion) in 2018, against Ksh11.1 billion (USD 109.4 million) worth of exports.

The second item on the agenda was the signing of a Framework Agreement between the Kenya National Highways Authority and the China Road and Bridge Cooperation, for the construction of Kenya’s first expressway from Jomo Kenyatta International Airport (JKIA) to Westlands.

The third item was the signing of a financing agreement valued at Ksh17 billion (USD 167.6 million) between the government of Kenya and China EXIM Bank, for the construction of the Konza Technopolis Data Center and IT infrastructure.

“Construction of basic infrastructure at the Konza Technopolis is in the final stages of completion and this IT project will enable the special zone to be operational by 2020. This is a huge milestone for the project conceived over 10 years ago and will be a significant source of jobs in the technology sphere,” State House said.

President Kenyatta also highlighted to his counterpart plans by the government to break ground on the Industrial Park and Dry Port to be constructed at the Naivasha Special Economic Zone by June 2019.

He has since welcomed Chinese companies interested in establishing industries in Kenya’s Special Economic Zones to visit the site.

The Industrial Park and Dry Port are expected to serve the country and neighbouring states of Uganda, Democratic Republic of Congo, Rwanda and South Sudan.

The Kenyan government shared its short term plans to rehabilitate the existing meter gauge railway to the Port of Kisumu “to ensure seamless interconnection with the SGR at the Naivasha facilities.

“SGR remains an essential project of Kenya’s Vision 2030 strategy and a key enabler of regional economic growth within East and Central Africa. As a Pan-Africanist, President Kenyatta remains committed to laying the necessary foundation for the trans-African rail and road infrastructure that will transform intra-African Connectivity and Trade for the economic benefit of over a billion Africans,” Waita noted in his statement.

During the summit, President Kenyatta called for the full participation of the private sector in the Digital Silk Road Initiative, “for seamless connectivity to be attained as envisioned by the BRI.”

According to Kenyatta, it is important to strengthen connectivity, open up markets, commit to rule based international trade, strengthen multilateral cooperation and ensure that development pursued is people centered, sustainable and ensures shared prosperity.

Chinese President Xi Jinping said USD64 billion in deals were signed at a summit on his Belt and Road Initiative and more nations would join the global infrastructure programme as he sought to ease concerns over the colossal project, Agence France-Presse reported. The US did not send any representatives to the meeting.

Beijing has pledged to ensure that projects on the new Silk Road are green and financially sustainable following concerns about debt and environmental damage.

“We are committed to supporting open, clean and green development and rejecting protectionism,” Xi told journalists at the end of the forum.

Washington, India and some European states have looked at the project with suspicion even as China continues to work around strengthening its global influence with a keen eye on Africa.

READ:How China plans to beat US in capturing Africa

President Jinping’s foreign policy is said to focus on re-inventing the ancient Silk Road to connect Asia to Europe and Africa through massive investments in maritime, road and rail projects, with hundreds of billions of dollars in financing from Chinese banks.

Kenya flowers making it big in the USA

EAC to exploit the $1.2 billion continental market after AfCFTA ratification