by Njenga Hakeenah
in Health, Kenya
0 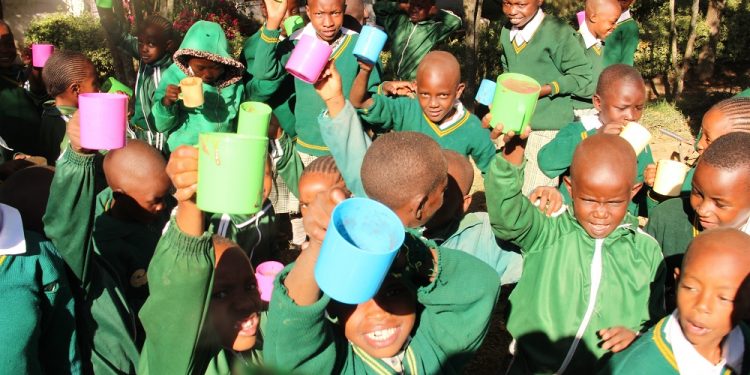 Pupils at Oserian Primary School enjoying a cup of uji in their first day of school in 2019. This follows the introduction of the school feeding programme by Oserian Development Company. [Photo/ODC]

Some 1,500 pupils of Oserian Primary School will now benefit from the Oserian Development Company’s feeding programme that has kicked off in Naivasha.

A cup of nutritious uji (porridge) for breakfast and a plate of food for lunch is a big relief to pupils and parents of the a public school who no longer need to struggle for these two meals, provided as part of the flower exporters CSR programme.

The excited pupils said they are happy given that in the past they had to make do with cold food carried from home.

Those who could not carry a meal from home skipped lunch while others reported cases of food going bad.

Oserian  Administration Director Mary Kinyua  said the school feeding programme is part of the company’s contribution to the success of the government’s big 4 agenda – food security and Education.

This is by keeping well fed children in school so they can concentrate on education.

She disclosed that a needs assessment identified the feeding programme as a gap requiring intervention.

Due to various reasons, some of the pupils went to school without breakfast and a few skipped lunch affecting performance.

The feeding also aims at encouraging enrolment in school because when children are assured of a meal, they will go to school.

It is expected that the number of people living in the Oserian village will surge to about 20,000 from the current 11,000 as investors take up space at the business park.

Chef Richard Lang’at who is in charge of the programme said feeding children is one of the best contributions a business can make to community development.

He added that parents of the school, most who wake up at 4am to prepare for work no longer have to worry about breakfast and lunch since the company has taken the burden off their minds and pockets.

The breakfast will be served between 6.30- 7am before lessons start at 8am.

Some Kshs13 million has been put aside for the feeding, partly contributed to by the farm’s partners, through the FairTrade premiums.

The others are food security, health and nature.

In June last year, the government revived the free milk programme to benefit more than 200,000 school-going children from different schools in Nairobi and its environs.

Launched by the Ministries of Education and Health in collaboration with dairy company Brookside which is owned by the Kenyatta family, Education Cabinet Secretary Amina Mohamed said more than 300 primary schools in Nairobi and its environs would benefit.

In the 1980s, President Daniel Moi run a similar programme for all schools which was fully funded by the government.

The milk was provided by the KCC.

Speaking during the launch at the Moi Educational Centre in Nairobi, Mohammed said, “This programme will encourage young children to eat foods that will feed their brains, to assist with boosting memory, having a sharper mind and the general feeling of good mental health.”

In June 2018, the Ministry of Education launched the National School Meals and Nutritional Strategy for the period from 2017–2022.

The launch was the Ministry’s preparation to take over school feeding programmes in Arid and Semi–Arid areas in the country from the World Food Programme (WFP).

Formulated in collaboration with the Brazilian National Schools Meals Programme (BNSMP), the strategy aims at meeting the nutritional needs of the school going children.

In October last year, WFP announced that the government of Kenya formally took over the responsibility of providing lunches to 1.6 million school children in arid and semi-arid areas of the country.

WFP was jointly responsible with the Ministry of Education, since the 1980s, in providing school meals in Kenya.