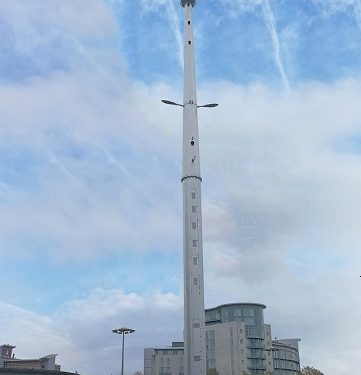 Safaricom’s TubeStar base station a precursor to 5G in Kenya?

by Kimani Chege
in Kenya, Telcos
0

Safaricom recently began trial of a new and innovative network coverage technology aimed at enhancing coverage in urban areas. Known as the TubeStar Base Station, the solution replaces the standard tower base station with a tubular structure that occupies up to 75 per cent less the land typically required.

In addition, the TubeStar eliminates the need for a compound and perimeter wall around the base station by incorporating all equipment within the tower structure.

The TubeStar solution not only accommodates current network requirements but also allows for future evolution. A single site supports five to seven band multi RAT (GSM/UMTS/LTE) and 5G-oriented evolution. With such capabilities, TubeStars can effectively assist operators to assume an early lead in 4.5 and 5G construction.

“Over the last 18 years, Safaricom has established itself as a global innovation leader through constant and deliberate investment in innovative and ground-breaking technologies. Ultimately, our goal has been to provide our customers with world-class connectivity and networks. The TubeStar base station is the latest such innovation and will enable us meet the emerging demands of Kenya’s fast-paced urban environments,” said Thibaud Rerolle, Chief Technology Officer, Safaricom.

The TubeStar is targeted at urban areas which present a space constraint when putting up network towers. Placing standard towers in such locations has been difficult as most landowners have future plans for currently unutilised land or have already put up structures on the entire land leaving little space for a typical base station.

The technology also eliminates the need for diesel generators by replacing these with high-performance lithium batteries, cutting down on pollution and emissions from network sites.

The first TubeStar has been deployed at Clay Works along the Nairobi – Thika Highway and will offer coverage along the Roysambu drift which has long been plagued by call drops. The location exemplifies challenges of providing coverage in urban areas as it is a depression where signals from surrounding base stations converge, resulting in interference and poor connectivity. The new base station will exclusively provide coverage in the affected locality eliminating reliance on the other cells.

In the last three years to March 2018, Safaricom has invested more than KES 100 billion in upgrading and maintaining its network and plans to spend up to KES 38 billion in the current year to March 2019.

Among enhancements it has rolled out in the previous year were East Africa’s first 4G+ network, 4G coverage to all 47 counties, and M-PESA upgrades to a new platform. The company also launched a KES 200 million Research and Development lab and carried out trials on the use of Internet-of-Things technology to help athletes in training.