A Swedish delegation to Kenya that she is leading has identified opportunities for further growth in the fields of infrastructure, agriculture, ICT and renewable energy. 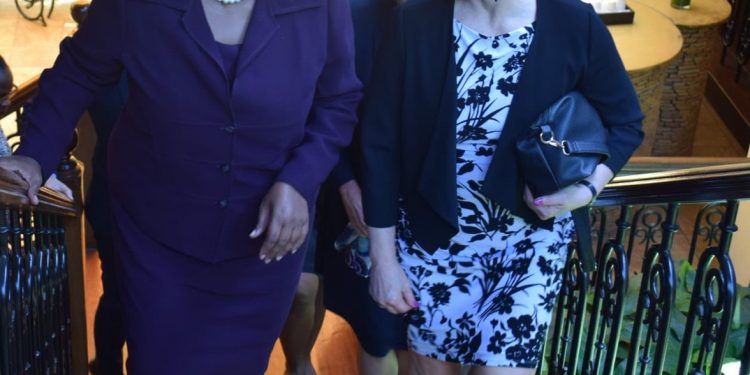 Around 50 Swedish related companies are represented in Kenya, with the majority based in Nairobi.

Sweden foreign minister who recently blasted the UK for the bitter Brexit divorce has been travelling to Africa to shop for investment opportunities for her country and recently held bilateral talks with Kenyan officials.

Margot Wallstorm, the feminist proponent minister and a hard hitting critic of Brexit has noted that Sweden has already identified areas that it want to invest in Kenya as a gateway to East Africa. She has held consultative meeting with Kenya’s Foreign Affairs CS, Monica Juma on different bilateral fronts between Kenya and Sweden.

Wallström blasted Britain’s political leadership for mismanaging the UK’s upcoming departure from the EU. “I just think that they’ve made such a historical mistake and they’ve really created a problem for all of us,” Wallström was reported saying. “I cannot forgive them for this,” she said.

A Swedish delegation to Kenya that she is leading has identified opportunities for further growth in the fields of infrastructure, agriculture, ICT and renewable energy.

Around 50 Swedish related companies are represented in Kenya, with the majority based in Nairobi. Among these are ABB, Alfa Laval, Atlas Copco, Bahco, Ericsson, Saab, Sandvik, Scania, SKF, TetraPak and Volvo. Several of these companies cover East and other parts of Africa from Nairobi.

The interest in Kenya and East Africa among Swedish institutional and private investors is growing. Swedfund, the Swedish development finance institution, has a regional office in Nairobi since 2009. There are significant opportunities for further growth in the trade relations, especially in the fields of infrastructure, agriculture, ICT and renewable energy.

Sweden has a Double Taxation Avoidance Agreement with Kenya since 1973.

As a result, the Government has introduced a number of policies aimed at facilitating foreign direct investments and improving the business climate in Kenya. Kenya’s strategic geographical location also makes it suitable as a manufacturing hub, something which the Government seeks to promote. The outlook for economic growth in Kenya is considered promising.

According to Wallstorm, the current business environment is attractive to Swedish investors. “There was a big delegation from Sweden here and the areas of possible investment range from waste management to industries,” Wallström said.

This interest of the Swedish investors has not gone unnoticed and CS Juma saying that more effort will be made to ensure the country is investor-friendly.

“We’re very pleased at the interest we’ve seen amongst the Swedish private sector and I have underscored the commitment of government to continue improving the ease of doing business so that we can really move seamlessly from aid to trade,” she said.

“We want to grow productivity for Kenyans, the Swedish and the world,” the CS pointed out.

Why Kenyans fight for inheritance after death strikes