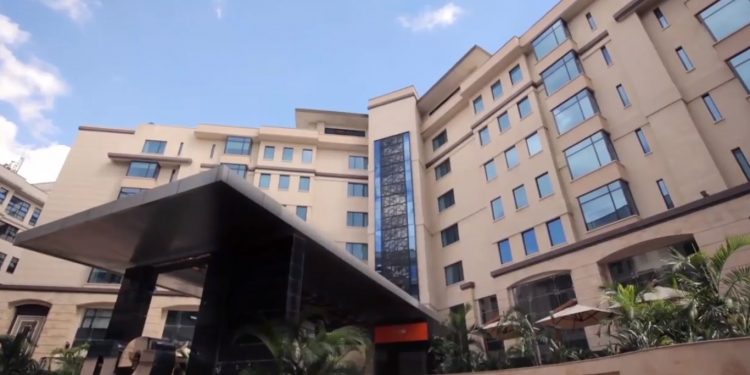 The Dusit D2 Hotel in Riverside. It is feared that terrorist have attacked the premises with armed personnel evacuating the area. [Photo/Dusit D2]

by Njenga Hakeenah
in Crime, Kenya
0
Share on FacebookShare on LinkedIn

Nairobi’s Westlands area is in confusion after several gunshots were heard in the affluent Riverside area.

The Kenya Police Service has confirmed the attack but has not qualified the magnitude.

We wish to confirm that there has been an attack incident along 14 Riverside Drive. The area has since been cordoned off.

Motorists are advised to use alternative routes to facilitate smooth operations of the Police.

The gunshots rent the air after an explosion suspected to be from a bomb threw those in the vicinity into confusion.

Currently, the melee is unfolding at the Dusit D2 hotel in the area with surrounding buildings being evacuated.

It is not yet clear what exactly is happening and whether it is a robbery incident or a terror attack.

Yet again, the scenes bring to mind the siege at Westgate Mall which left 71 people dead including four attackers and 175 injured on September 21, 2013.

On Monday, a Nairobi court ruled that the three suspects accused of masterminding the Mall attack in 2013 have a case to answer.

Already, a number of cars have gone up in flames with heavily armed personnel now present.

The nearby University of Nairobi has been cleared with students being advised to calmly but steadily evacuate.

It is also emerging that several people have lost their lives with the exact number of people in the Dusit D2 not yet known.

The police are also yet to confirm if this is a terror attack or a robbery incident.

The Riverside area has several businesses and it has become a popular hub for companies seeking closeness to the major infrastructure in Nairobi.

The attack comes on the anniversary of the El Adde attack three years ago and the ragtag militia group Al Shabab has claimed responsibility.

This attack will a blow to the recovering economy following the Westgate attack where several businesses were affected.

Rescue operations have been underway carried out by Kenya’s security officers, including the elite recce squad.

The Inspector General of Police (IG) Joseph Boinnet has assured that the situation, which could be ‘a terror attack’ is under control.

“The attack which could be a terror attack started at 3pm. The operation is still going on as we speak. There could be some injuries from the attack but we’re in the process of ascertaining the magnitude.”

It's USD 31 for BBOXX expansion into Kenya, Rwanda and Congo

China is king of creative goods and services