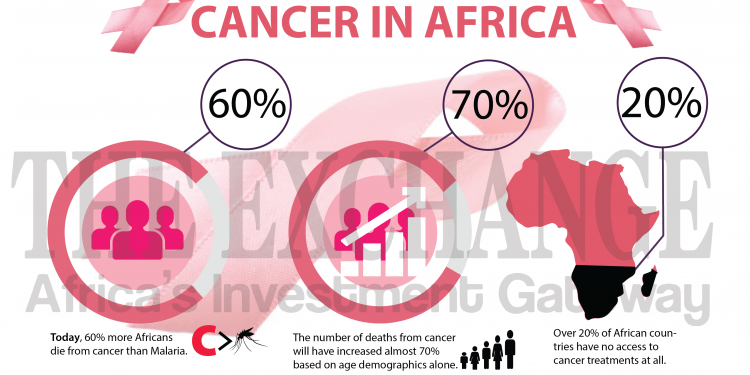 World Cancer Day: A look at the rising cost of cancer in Africa

by Kimani Chege
in Health, Kenya
0
Share on FacebookShare on LinkedIn

As the world marks the World Cancer day, the focus has now shifted to the increasing cost of seeking treatment with hordes of patients travelling to India for treatment

The world has marked the Cancer Day in which the attention on the pain that the disease has brought to patients. For most patients, the pain has grown beyond bodily pain to the crippling economic situation that the disease causes.

World Cancer Day is organized by the Union for International Cancer Control (UICC) and celebrated each year on 4 February. This year’s theme, “I can, we can” acknowledges that everyone has the capacity to address the cancer burden.

World Health Organisation (WHO) estimate that 17 people die of cancer every minute globally with the disease rising high on the list of major killers. Those that survive, are left with a deep financial implication whose ramifications are felt for years.

Cancer is the second leading cause of death globally, and is responsible for an estimated 9.6 million deaths in 2018. Globally, about 1 in 6 deaths is due to cancer.

According to Jennifer Dent, the president of BIO Ventures for Global Health
In Africa, cancer now kills 60 percent more people each year than malaria in Africa. Without intervention, the number of deaths due to cancer across the African continent is projected to double by 2040.

In an opinion piece prior to the World Cancer Day, Dent noted, “Patients of African descent are disproportionately affected by certain malignancies. Cervical cancer rates are four times higher in African women than in American women, and both African and African-American women are more likely than white women to be diagnosed with triple-negative breast cancer, a particularly aggressive form of the disease. “

The economic impact of cancer is significant and is increasing. The total annual economic cost of cancer in 2010 was estimated at approximately US$ 1.16 trillion. Only 1 in 5 low- and middle-income countries have the necessary data to drive cancer policy.

According to Cancer Atlas, cancer is emerging as a major public health problem in Sub-Saharan Africa (SSA) because of population aging and growth, as well as increased prevalence of key risk factors, including those associated with social and economic transition.

A high residual burden of infectious agents (HIV/ AIDS, human papillomavirus, hepatitis B virus) in certain SSA countries still drives the rates of certain cancers; about one-third of all cancers in the region are estimated to be infection-related.

Breast and cervical cancer in women and prostate cancer in men are the major cancers that define the overall risk of developing and dying from cancer in Africa.

In Kenya, cancer is ranked third among the main causes of death after infectious and cardiovascular diseases. The disease is also a major consumer of both individual and family wealth as a sizable percentage of Kenyans are seeking treatment abroad in countries like India.

In Kenya, chemotherapy typically costs between Ksh 6,000 (US$60) and Ksh 600,000 (US$600) per treatment course in public hospitals, depending on the cancer being treated.

In its Globocan 2018 report, the World Health Organisation’s International Agency for Research on Cancer (IARC) said that 47,887 Kenyans get cancer every year and 32,987 die from the disease. The most common is breast cancer with 5,985 women and men diagnosed every year compared to 2,864 prostate cases.

Medical pilgrimage to India in search of Cancer cure

Africa lacks high end equipment to diagnose and treat various types of cancer. Where the equipment exists, they have either been run down by the government or are facing a growing list of users leading to a ‘waiting list’ which only works to drain patients. Private hospitals with such facilities are almost out of reach of many people in the continent.

India has emerged as a favorite destination of those seeking further treatment as the country is valued as a cheaper alternative to local treatment. It is estimated that there are
more than 10,000 Kenyans seeking treatment in India annually according to statistics from the National Health Insurance Fund (NHIF).