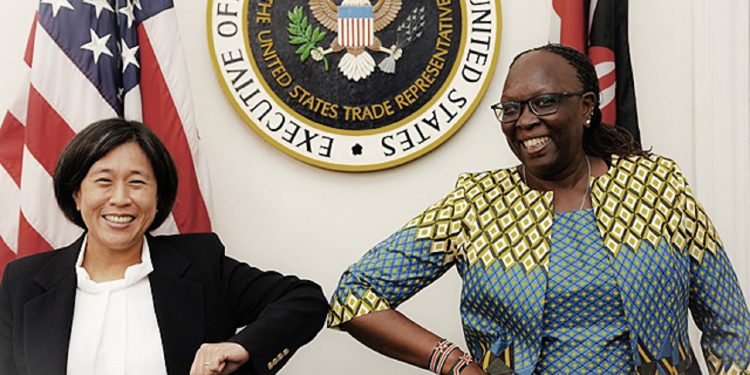 Kenyan Cabinet Secretary Betty Maina (R) with US Trade Representative Katherine Tai. Kenya and the US have launched a strategic trade and investment partnership. [Photo/Agoa]

The Thursday, July 14, 2022, partnership announcement by the two countries, however, made no mention of reducing tariffs or enhancing market access, in line with other recently launched US trade dialogues.

Within three months, the US and Kenyan governments will start work to develop a road map for engagement in areas including agriculture safety and digital trade standards, climate change, regulatory practices and customs procedures, according to the US Trade Representative’s office.

Kenya has long sought a full free trade agreement with the United States, and negotiations for such a deal to lower bilateral tariffs were launched by the Trump administration with the East African country in 2020. But the Biden administration, which has shunned traditional trade deals, did not resume those talks.

East Africa’s investment hub enjoys substantial duty-free access to the US market through the Africa Growth and Opportunity Act (AGOA), a trade preference programme for sub-Saharan African countries. However, this agreement expires in September 2025.

Kenya exported US$685.1 million worth of goods to the United States in 2021, of which more than 75 per cent entered duty-free under AGOA, according to the Congressional Research Service. These goods were mainly apparel, macadamia nuts, coffee, tea and titanium ores.

US exports to Kenya in 2021 hit US$561.6 million worth of goods with aircraft, plastics, machinery and wheat among the biggest categories.

The Thursday, July 14, 2022, partnership announcement by the two countries, however, made no mention of reducing tariffs or enhancing market access, in line with other recently launched US trade dialogues with Britain, the European Union and Indo-Pacific nations.

US Trade Representative Katherine Tai, who launched the partnership with Kenyan Cabinet Secretary Betty Maina during a virtual meeting on Thursday, said in a statement that she wants the partnership to “grow our trade and investment relationship in a way that promotes resilience and facilitates sustainable and inclusive economic growth.”

“We also hope that this initiative can serve as a model for trade policy engagement in Africa, one of the most dynamic and fastest-growing regions in the world,” Tai added.

Richard Neal, a US Representative who chairs the trade and tax-focused House of Representatives Ways and Means Committee, held out hope that the US-Kenya talks could develop into a full trade deal.

“This initiative will lay the groundwork for a comprehensive free trade agreement that includes market access, builds off AGOA, and complements both regional and continental integration,” he said in a statement.

Meanwhile, Meg Whitman has been confirmed by the US Senate as the new US Ambassador to Kenya. She will take over for Kyle McCarter, who left in January 2021.

She has worked as the vice president at Disney and as an executive for Dreamworks, P&G and Hasbro.

Whitman was the President and CEO of eBay, a company that helped revolutionised e-commerce from 1998 to 2008.

In 2011, she became a member of HP’s board of directors. Later that year, she was named CEO, a position she held until 2018.

She then ran Quibi, a short-lived mobile streaming service that shut down when the pandemic was at its worst.

Forbes lists her as one of the 1000 richest people in the world with a net worth of Ksh 361 billion.

Meg Whitman: US appoints one of the richest Americans as Kenya's ambassador