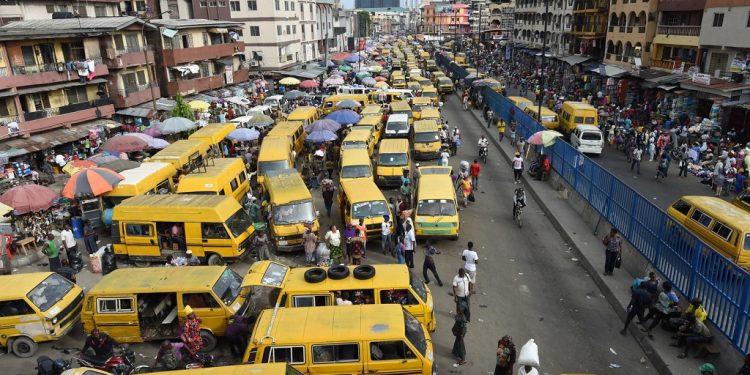 A scene from Lagos, Nigeria which could lose between US$ 14 billion and US$ 19 billion of total crude oil exports in 2020. Africa may lose half of its GDP with growth falling from 3.2 per cent to 2 per cent due to among others the coronavirus pandemic. [Photo/ The Guardian Nigeria]

by Njenga Hakeenah
in Nigeria, Tech & Business
0
Share on FacebookShare on LinkedIn

Lagos state is the ground zero for the deployment of reliable broadband infrastructure by West Africa’s connectivity and data centre solutions provider, MainOne.

The rollout across the state is coming under the “Digital Lagos: Broadband for All” campaign initiative to enable the digital transformation of the state which hosts Nigeria’s most populous city, Lagos.

Sanwo-Olu says, “Technology will improve the rule of law, education, ease of doing business and government processes of Lagos.”

MainOne CEO, Funke Opeke, said during the launch on Tuesday that the company is keen to collaborate with the government of Lagos State and all other relevant stakeholders to help citizens from all walks of life realize the benefits of improved quality of life through broad, sustainable economic growth, modernized education, health, and other services delivery.

Taming the chaos of Lagos

In building a Digital Lagos, Sanwo-Olu’s administration has set a strategic imperative to make Lagos a 21st Century Economy.

This vision is based on the five pillars T.H.E.M.E which include Transportation & Traffic Management, Health and Environment, Education and Technology, Making Lagos a 21st Century Economy, Entertainment and Tourism.

In 2013, MainOne deployed a fibre pilot in Yaba in partnership with the Lagos State Government, ccHub and Technovision and the outcome has been phenomenal.

“MainOne is pleased to have the opportunity to present its plan for Digital Lagos, a proven path to ubiquitous broadband connectivity. This plan will involve the investment by MainOne of over N25 billion, approximately USD70 million, over the next 2-3 years to develop critical fibre optic infrastructure to enable broadband services across Lagos state,” Opeke said.

To improve security, the broadband will support the deployment of surveillance cameras to efficiently monitor traffic, streets activity and provide real-time data to security officials to minimize crime and enhance public safety.

Nigeria has set a financial inclusion target of 80 per cent for 2020 and online access will be critical to get there.

The country is using Kenya as a model for digital finance. The East African economic hub has demonstrated what ICT can do for financial inclusion and innovation.

In 2018 alone, online transactions in Kenya stood at KShs3.98 trillion (USD38.5 billion). This is about half of Kenya’s GDP.

Over 90 per cent of Kenyans has access to mobile payments and digital finance enabled by quality internet connectivity.

M-Pesa is Kenya’s most popular mobile money service which allows customers to pay bills, send and receive money among other conveniences.

M-Shwari is one of the popular offerings linked to M-Pesa and which is a bank account offering savings and loans to customers.

It is estimated that one in every 5 Kenyan adults are active M-Shwari customers. This brings the number to 4.5 million users.

The statistics show that a third of active M-Pesa customers are also active M-Shwari users.

According to Financial Inclusion Insights, half of all M-Shwari customers do not have any other bank account.

54 per cent of M-Shwari accounts are held by customers without a bank account and such avenues for financial inclusion are the next frontier of digital financial services.

Apart from M-Shwari, the Kenya Commercial Bank has KCB-M-Pesa which was launched in March 2015 and with the latest partnership between Safaricom and Equity Bank, M-Kesho may become another offering for customers linked to M-Pesa.

Education is a key factor for any nation seeking economic growth and development.

MainOne says that affordable broadband in schools will not only improve the quality of students graduating from Nigeria’s school systems but also the capacity of the teachers.

Sanwo-Olu’s administration can improve upon programmes such as CODELAGOS which will prepare the youth for 21st-century jobs thereby safeguarding their future employment possibilities.

Opeke said, the network to be built by MainOne would connect critical state institutions, covering over 300 government agencies.

This is in addition to the 10,000 CCTV locations in Lagos, Telcos and ISP.

There is already an existing 700-kilometre network covering major population centres in Lagos by MainOne.

Most populous city in Africa

Lagos state hosts the city by the same name which is the most populous not only in Nigeria but also on the African continent due to its adjoining conurbation.

The megacity hosts one of the busiest and largest seaports on the continent.

It also boasts the fourth-highest GDP in Africa making it a major financial centre in Africa.

You can also read: The $130 Billion opportunity in digital skills in Sub-Saharan Africa, Partnering to spark change in support of women entrepreneurs in Nigeria, Why Central Africa is dragging Africa’s growth