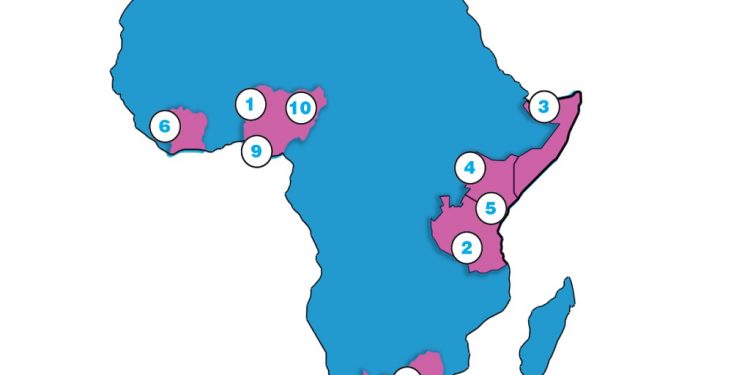 The locations and countries where the blockchain technology is being used in Africa. The global blockchain market value is estimated to surpass the USD 60.7 billion mark by 2024 and African tech companies are not being left behind in the revolution. [Photo/Liquid Telecom]

With the global blockchain market value estimated to surpass the USD 60.7 billion mark by 2024, African tech companies are not being left behind in the revolution.

In 2017, the technology’s global worth was more than USD 706 million according to Orbis Research.

As keen interest emerges in the potential for blockchain, major vendors and multiple blockchain specialists are focusing on offering blockchain and broader distributed ledger technology (DLT) implementation and consulting services.

Thanks to lower bandwidth and storage costs and improved storage and computing capacity, blockchain seamlessly and cost-effectively connects the multiple nodes in the chain across multiple regions and has become a viable solution for pan-African systems of record.

Unlike cloud-based data storage, blockchain distributes data into nodes along the chain, making it harder – or virtually impossible – for hackers to access.

According to Liquid Telecom‘s African Blockchain Report, startups in Africa are not being left behind in utilising the technology.

Paxful has announced plans to establish a blockchain incubator hub in Lagos, Nigeria, as well as run blockchain and cryptocurrency events in Nigeria, Ghana and Cameroon.

ImpactPPA and the Earth Day Network are launching a blockchain energy platform in Somaliland to manage on-site renewable energy to facilities such as hospitals and schools.

‘Nurse in Hand’, a Kenyan startup, has signed an MoU with Apla Tech Company to build a blockchain-based accident and emergency response platform.

Binkabi, an e-bartering platform for SMEs, allows traders to settle over the blockchain and pay in local currency, using its own utility token. An initial focus will be on trade flows between Côte d’Ivoire and Vietnam.

Blockchain start-up TariLabs has launched in Johannesburg, South Africa, with the aim of building the open source Tari blockchain protocol.

The protocol is being constructed as a platform for the management, trade and use of digital assets, and will be merge-mined with the Monero blockchain.

It reported that the typical daily volume of the payments system could be processed in less than two hours with full confidentiality of transactions and settlement finality.

The Africa Blockchain Alliance actively seeks to bring together organisations and innovators in the blockchain arena. It is based in Nigeria, with partners in the US, Senegal, Ethiopia, UK, Namibia, Zimbabwe, Kenya and Uganda.

The taskforce also includes Juliana Rotich, a tech entrepreneur best known as one of the co-founders of BRCK and Ushahidi.

Dr Ndemo was influential in transforming Kenya’s ICT sector while he was the permanent secretary from 2005 to 2013.

He believes now is the time for decisive action from African governments.

“If countries don’t begin to build new capabilities and capacities for these technologies then they will be bystanders,” says Dr Ndemo.

He adds, “Africa missed the first, second and third industrial revolutions, but we have a real opportunity to be a part of the Fourth Industrial Revolution.”

Digital transformation in Kenya is paving the way for the application of emerging technologies like blockchain.

The government has made a further commitment to widen access to services for citizens from their homes or business premises, and is also exploring the use of biometrics.

“One of our first projects will be creating a trusted identity platform, which would provide us with biometrics on an individual. This removes the need to have multiple data sets to verify a person for a transaction,” says Dr Ndemo.

The Sierra Leone elections in March 2018 alerted the media to a compelling use case for blockchain even if the project ended up marred in controversy.

A Swiss-based blockchain startup called Agora claimed to have facilitated the first blockchain-based election. This claim was subsequently contested by the country’s National Electoral Commission (NEC).

It later emerged that the startup had acted as an international observer at 280 of the country’s 11,200 polling stations, recording the votes on its blockchain as part of a proof-of-concept experiment.

Even if the project was overshadowed by the hyperbole, it does highlight the interest in using blockchain to improve transparency in the electoral process – an enticing prospect for a region accustomed to controversial elections.

“Blockchains can accurately verify the identities of individuals while offering a method to register assets and track transactions, all of which can contribute to limiting the potential for corruption.”

Yet he predicts that the adoption of blockchain-based solutions to prevent corruption could be slow: “Although blockchains do have the potential to limit internal government corruption and bring transparency to the public sector, these use cases are far less explored than those which allow governments to combat external corruption,” says Etheredge.

“One possibility is to use blockchain technology to track the tender process. A key barrier to adoption here is a misalignment of incentives: such a project would have to be implemented by government itself and thus constitute government voluntarily subjecting itself to further checks and balances.”

While the South African Reserve Bank has run a proof-of-concept trialling a distributed ledger technology-based wholesale payment system and the Tunisian government is using blockchain to boost its eDinar digital currency, African governments have overall been quiet on the blockchain front.

However, with the governments of Kenya and Uganda making the right noises, expect that to change soon.

It adds that to accom­plish this without a trusted party, trans­actions must be publicly announced, and “we need a system for participants to agree on a single history of the or­der in which they were received. The payee needs proof that at the time of each transaction, the majority of nodes agreed it was the first received.”

To ensure that the process is foolproof, a Times­tamp Server is a solution proposed in the white paper.

A times­tamp server works by taking a hash of a block of items to be timestamped and widely publishing the hash, such as in a newspaper or Usenet post.

The times­tamp proves that the data must have existed at the time, obviously, in order to get into the hash.

“Each timestamp includes the previous timestamp in its hash, forming a chain, with each addi­tional timestamp reinforcing the ones before it,” adds the white paper.

You can also read how a Kenyan blockchain research project will help California and about the American tech company HashCash weighing Kenya’s Blockchain leaving Kenya at the centre of global cryptocurrency talk.

Is traditional CV dying? Here's what employers are really looking for