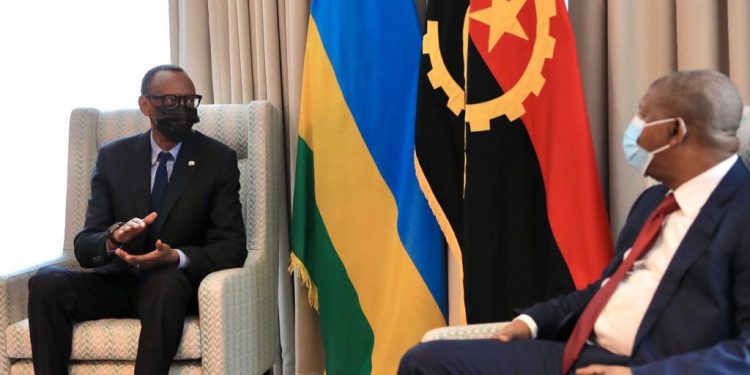 Rwanda and Angola signed 9 cooperation agreements in different sectors including agriculture and livestock, local administration, health, as well as mineral resources, oil and gas, trade and investment, among others.

by Joseph Kangethe
in Countries
0
Share on FacebookShare on LinkedIn

The discussions took place in Kigali, Rwanda, with a high-level delegation from Angola led by Tete Antonio, the country’s Minister of External Relations.

Other officials from Angola who participated in the signing include:

“Angola and Rwanda will work together to ensure that our people can benefit from the cooperation between our countries,” said Dr Vincent Biruta, the Minister of Foreign Affairs and International Cooperation. “We have different experiences from various sectors, and we just agreed to work together and share our experiences to make sure that we can mutually benefit,”.

Dr Vincent noted that there are many ways that the people of Rwanda and Angola can benefit from the deals, giving an example of how necessary the removal of visa requirements is.

“We have agreed that visas for diplomatic service passports and the ordinary passports for Rwandans visiting Angola have been removed. Rwandans can travel to Angola, do business there, and benefit from our double taxation avoidance agreement. So there are many ways that Rwandans and Angolans can benefit from the agreements we signed today,” he said.

He called for results-oriented action plans, realistic time-frames, and efficient monitoring mechanisms to ensure the full benefit of both countries’ people.

“The government of Rwanda is committed to cementing bilateral cooperation with the government of Angola and working together in addressing regional, continental and global challenges that affect our countries,” he said.

On his part, Tete Antonio said he is “deeply convinced” that the agreements signed will help to create a conducive environment for strengthening the two countries’ cooperation.

“We believe that the South-South and intra-African partnerships such as the one we intend to build with Rwanda offer a good opportunity and valuable conditions for our continent on the road to prosperity,” he noted.

The Memorandum of Understanding signed between the two countries highlights the excellent relationship between Presidents Paul Kagame and João Manuel Gonçalves Lourenço.

“The main aim of our commitment is to make sure that the relations between the two countries are not only a business of diplomats and politicians. But most importantly, our people should enjoy these relations, ” Tete Antonio added.

The increased relationship comes at a good time when the Democratic Republic of Congo has joined the East African Community, a move that has improved the cooperation between Rwanda and the DRC.

At the beginning of the year, President Kagame visited Angola on a two-day visit to mend relations between the two countries on opposite sides of the conflict in the neighbouring DRC.

The DRC conflict topped the agenda in talks between Kagame and his Angolan counterpart Jose Eduardo dos Santos, Mutoboba said. Kagame is due to join a summit of southern African leaders in Malawi on Monday to discuss implementing the delayed Lusaka peace agreement in the Congo.

Rwanda and Angola share a lot regarding their Liberation history and the struggle for justice and human rights, a common factor that brings the two countries together.

Rwanda and Angola are members of the International Conference on Great Lakes Region (ICGLR). Both are signatories to the Peace, Security and Cooperation Framework for the Democratic Republic of Congo and the region.