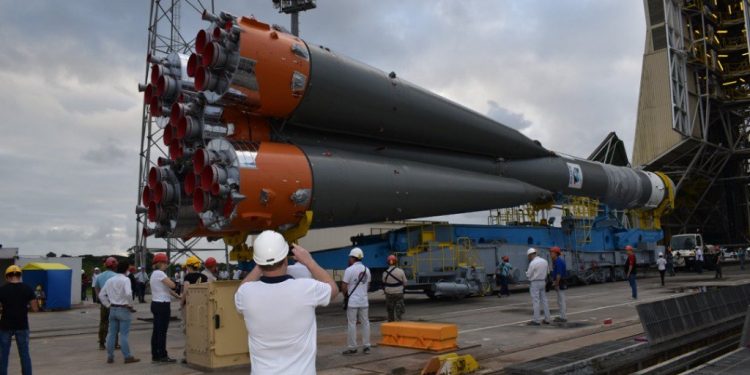 The Rwandan satellite being set up for launch. Rwanda has launched the first ever Satellite to connect remote schools to the internet. [Photo/MINICT Rwanda]

by Njenga Hakeenah
in Infrastructure, Rwanda, Tech & Business
0
Share on FacebookShare on LinkedIn

While other East African countries are taxing internet out of existence, Rwanda has launched the first ever Satellite to connect remote schools to the internet.

Launched on Wednesday, the satellite named ‘Icyerekezo’ was created in a partnership project between Rwanda and British telecommunication giant One Web.

The satellite was launched at the French Guiana space centre on the Atlantic coast at the port mostly used by the European Union.

Ushering in a hyper-connected future

As a commitment to build Rwanda’s space industry, Icyerekezo is an inspiration for the younger generation as the country prepares to usher in a hyper-connected future.

Rwanda’s Ministry of Information Telecommunication Technology and Innovation said in a statement that the launch is the beginning of building local capacity.

The country’s Minister of ICT and Innovation, Paula Ingabire, said: “Rwanda’s choice to invest in space technologies is part of our broader mission to bridge the digital divide by providing equal digital opportunities to rural and remote communities.”

She added that Icyerekezo was named by students from Nkombo Island which is one of the remotest Islands within Lake Kivu in western Rwanda.

“We are delighted in this transformative initiative which presents us a huge opportunity to leverage satellite connectivity, using OneWeb’s constellation, providing low-latency and high-speed internet to schools in remote communities of Rwanda,” Ingabire added.

Rwanda has placed technology at the forefront as a key driver of national development and transformation.

In January this year, Rwanda announced its long-term space programme plan, with a complementary initiative to launch its own first satellite this year.

These datasets are a crucial input into designing sustainable programmes for connecting schools across Rwanda and globally.

Leveraging investments made in rolling out a fibre optic backbone network, 92 per cent 3G Coverage, and 96.6 per cent 4G LTE coverage, there’s still a significant need to explore other last-mile solutions that will bridge the digital divide in an inclusive and sustainable way.

“Connecting schools is a foundational aspect and driver of transformative learning. Rwanda’s ICT in education Master Plan outlines ambitions of interventions to connect schools and empower Rwandan children with immense opportunity,” he said.

Mutimura noted that research, supporting competency-based learning, access and sharing digital content, support systems to monitor and evaluate processes were among the key focus areas in the project.

This programme will also involve training students in space technology which complements efforts of the newly launched Rwanda Coding Academy.

The Academy was set up to foster local experts in software development as part of the Rwanda Digital talent policy’s drive to strengthen ICT capabilities in the country.

Students at the Rwanda Coding Academy will undertake a three-year graduation software engineering course, specifically in the field of software programming, embedded programming and cyber-security.

The school opened with 60 students, 30 boys and 30 girls, who are divided into three streams of 20 students each.

In line with the National Strategy for Transformation, the government of Rwanda has embarked on building a knowledge-based economy, through promoting science and technology, notes a statement from the ICT ministry.

“The school comes to respond to the recommendations of the “Rwanda Digital Talent Policy” as approved by the Cabinet in April 2018,” the statement adds.

The policy calls for initiatives to strengthen a framework of ICT training and qualification in Rwanda, placing emphasis on hands-on and market-oriented ICT skills, specifically introducing software programming to learners at elementary levels in order to address current shortages of software developers on market.