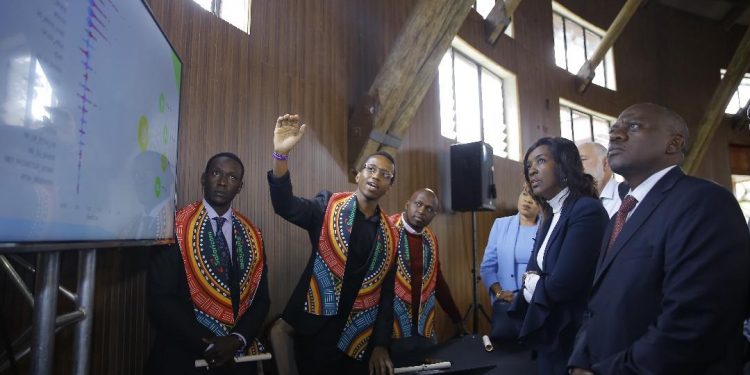 Data Science graduate, Kevin Thairu, (L), explaining to Safaricom executives how their software works during the Safaricom Digital Academy graduation at Bomas of Kenya. Safaricom’s digital training has saved 60 staff from the sack even as Andela fired 400. [Photo/Ogilvy]

The digital training saved 60 staff from the sack

Kenya’s largest telco, Safaricom, has unveiled a programme that will empower and train employees seeking to shift to new digital careers.

Known as The Digital Academy, the initiative especially caters to employees working in technology careers that are becoming automated as computers gain more capabilities and take on more roles.

In the first phase that began early this year, Safaricom has already fully trained 60 of its staff and placed them in new roles.

An industry first, the initiative is also helping the company bridge a shortage of talent as it seeks to bridge a customer shift to increasingly digital lifestyles.

This digital transformation has been behind the growth of demand for data scientists, data analysts, and new-age programming experts amongst other roles.

“Safaricom operates in a fast paced environment where technology is ever changing. Recent advances have automated sections of our network meaning that certain careers will soon no longer be necessary,” said Michael Joseph, CEO, Safaricom.

He added that at the same time, these changes are driving demand for new skills where there is a shortage of talent in the market.

The Digital Academy is a human resource innovation that has enabled us to both empower our staff with new skills and to have the right mix of talent based on our customer needs.

The first three months of the course were classroom-based with the last three months seeing the employees practically applying their new skills in developing new workplace innovations.

Among the tools that the employees have developed during the training is a Data Revenue Analysis and Prediction Tool, and a Home Fibre Customer Satisfaction Analysis Solution.

All 60 employees remained under employment for the duration of the programme with Safaricom also fully footing the costs of the training.

Following the success of the first phase of the programme, the company plans to partner with both local and global players to roll out the Digital Academy to more of its staff in coming months.

Besides the academy, Safaricom has also deployed a digital learning platform that will provide on-the-job training in more than 10,000 courses to its entire staff.

Ironically, tech hub Andela has let go of 400 of its contracted junior developers from Kenya, Uganda and Nigeria.

Due to a major shift in strategy, the company announced the layoffs saying the saturation of talent in its core market, the US, led to the decision.

Andela said it could no longer place all its junior engineers with clients, something that has been the case for the past one year.

The company’s chief executive Jeremy Johnson said that the layoffs had nothing to do with cost cutting, or government policies. “It’s a function of the market,” he posted on Facebook.

In January, Andela announced the completion of a US$100 million Series D funding.

Among the participants in the round included Generation Investment Management, Chan Zuckerberg Initiative, GV, Spark Capital, and CRE Venture Capital.

This financing brought Andela’s total venture funding to US$180 million.

Founded in 2014, Andela became a conduit for connecting Africa’s engineering talent with the demand for software developers worldwide.